You are here:  Attractions -> Things to Do in Oxfordshire -> Ashmolean Museum 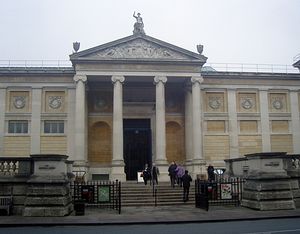 
The Ashmolean Museum was founded in 1683; it is the world's first University museum and the oldest public museum in Britain. It is situated in the heart of Oxford, surrounded by the many colleges which make up Oxford University.

Over the centuries the Ashmolean has undergone re-locations and alterations, but none as dramatic as its recent extension, which has transformed the ancient museum into an exciting and inspirational museum for the 2Ist century.

The project, which cost £61 million, was partly funded by a £15 million grant from the Heritage Lottery Fund; and there has been support from Lord Sainsbury's Linbury Trust, as well as several gifts from foundations, trusts and individuals.

The new building was designed by Rick Mather Architects, and 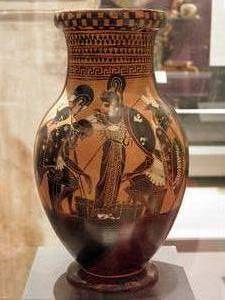 is next to Charles Cockerell's original museum (which dates from 1845). The museum extends over 5 floors; with advanced environmental controls, which allow the rarest and most delicate treasures to be on display. The display space has been increased by 100% with the addition of 39 new galleries, 4 temporary exhibition galleries, a new education centre, new conservation studios and Oxford's first roof top restaurant the Ashmolean Dining Room.This new building has given the Ashmolean the opportunity to develop a new display strategy named "Crossing Cultures, Crossing Time". Their aim has been, not only to create a world-class cultural showcase, but a museum worthy of displaying collections of east and west from Neolithic times onwards.

Among the notable collections within their care is the most far-reaching collection of Egyptian pre-Dynastic objects beyond Cairo and the most outstanding Anglo Saxon treasures out-with the British Museum,plus the finest collection of modern Chinese art in the Western world.

The ground breaking display approach was created by Metaphor Design, exhibition designers who have worked in conjunction with the Ashmolean's curatorial staff to plan the new galleries. Together they have transformed the way these treasures can be seen by the public. It is based upon the thought that many civilisations have created today's world, not in isolation, but in what may be considered an interconnected world culture. "Crossing Cultures, Crossing Time" tells the story of objects, which are comparable, not only by time, but also across continents.

Visitors to the museum in the 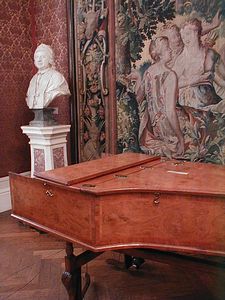 past, could not enter through the grand door at the front, but had to make their way to a side entrance, which was less than welcoming! Today the beautiful facade and portico remain and the first transformation visitors can see as they enter is a vast double height glass feature, with a view into the atrium, with a Cascading Staircase. The atrium features a huge plaster cast of the Apollo from Olympia.

Lower Ground Floor - Exploring the Past

These themed galleries look at objects common to many cultures, such as money, materials and depictions of the human form.

Six new galleries have been created for the Ancient Egypt and Nubia (today known as Sudan) collections. Starting at Gallery 22 on the Ground Floor. You can use the Egyptian gallery audio guide to take you on a journey travelling over 3000 years of human occupation of the Nile valley.

The Egyptian collections are one of the Ashmolean Museum's most popular attractions, as they contain material from prehistory to the 7th century. The collections are findings collected over 300 years and tell many fascinating stories of archaeological discovery.

The Ancient World Floor, charts the materialization and expansion of ancient cultures from Egypt and the Near East through Greece and Rome, to India and China.

Integrated on this floor is the Cast Gallery, which has been re-organised showing casts in the settings in which the sculptures were found in the Greek and Roman worlds. The Ashmolean's collection of casts 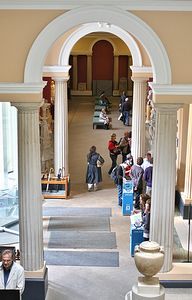 is one of the oldest and best preserved in Britain; it includes over 900 casts, some dating back to the 18th century.

This gallery tells how trading routes connected the Mediterranean to Asia in early modern times. On this floor there is also the newly themed gallery of the Mediterranean and the Museum"s displays of Islamic and Indian art.

Here you can discover how the far east and the west came into contact with each other. This floor includes the Museum's Western Art galleries and the collections of Japan and China.

Third Floor - The Making of the Modern World

This floor is the home of the Museum's collections of 19th and 20th century European Art. Exploring art, religion, geography and ecology of cultures across Europe to the Far East, showing the integration of people and items that have shaped the world we live in today. Also on this floor are the new Special Exhibitions galleries.

On each floor there is an orientation gallery, which introduces the key themes. It supplies story trails for visitors to follow, helping them plan their way through diverse cultures and eras, to find enlightening associations that bring the past to life.

There is disabled access throughout the Museum with ramps into the building, lifts to all floors and wheelchairs are available.

The Information Desk is situated on the Ground Floor inside the Main Entrance and the Shop is on the Lower Ground Floor, selling unique gifts inspired by 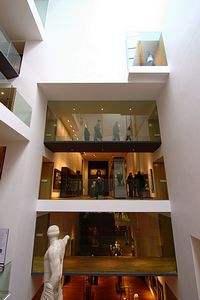 the collections in the Museum.

On the Fourth Floor is Ashmolean Dining Room; Oxford's first roof top Restaurant and Terrace; from here you can enjoy delicious dishes accompanied by fine wines from around the world, while admiring the views over Oxford's "Dreaming Spires".

The Museum is named after its founder Elias Ashmole, a collector and a devotee of antiques; he studied at the University of Oxford when he was in military service there.

He was one of the first gentleman Freemasons in England; he was also a founder member of the Royal Society, interested in the study of nature, objects and their application to the benefit of mankind. His collections included books, manuscripts, coins and metal. His range of interests included astrology and alchemy; it has been said that he possessed the secret of the Philosopher's Stone (one of the great alchemical secrets).

Although the Museum opened to the public in 1683, the history of its contents can be traced even earlier, to the date when Ashmole meet the Tradescant family. Father and son, both called John Tradescant, were gardeners to King Charles I and they travelled widely collecting not only plants, but also an interesting variety of objects and curiosities from around the world.

In the late 1620s John Tradescant the elder took a lease on a house in Lambeth, later known as "The Ark". Ashmole purchased the next door house and took a keen interest in the Tradescant collection. The collection of curiosities was opened to 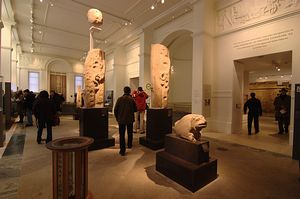 the public and the first recorded date of it being viewed was in 1634.

With his interest and knowledge of antiques Ashmole helped the Tradescants to compile a catalogue of their collection and it is recorded that in 1656 he paid for the printing of the catalogue.

In 1657 Ashmole began negotiations with Oxford University for the building of a new museum. There after an elegant building was constructed on Broad Street, which is now the Museum of the History of Science.

John Tradescant III passed away while still very young, leaving his father without an heir and the collection in danger. In 1659 the Tradescant collection was passed on to Ashmole, by Deed of Gift. As it happened John Tradescant II came to regret this and made a will leaving everything to his wife. Thereafter a court case followed, but the Deed proved to be valid and Ashmole won his case.

Although Ashmole had intended that his own extensive collection would be passed on to the University, unfortunately a fire in his chambers in Middle Temple destroyed much of his collection. Therefore together with what remained of his own collection he bequeathed the Tradescant collection to the museum, which opened in 1683.

At the time it was thought by many that the museum should have borne the Tradescant name, since most of the collection donated had a Tredascant distinction. However, it was due to the authority of Ashmole that the University was convinced to commission the new museum. It 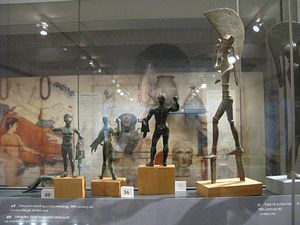 was clear that he provided an academic foundation and the decrees by which it was to run. It is now thought that the name of Ashmole is the appropriate name for the Museum.

During the 18th century there were a few important acquisitions, the best known is the Alfred Jewel, which was donated in 1718 and a collection of materials from Captain Cook's Pacific voyage of 1772-5.

By the 1820s it was found that much of the original collection had deteriorated and was in total decay. However large amounts of natural history specimens were acquired and redisplayed and the nature of the Museum continued as before until the mid 1800s, when the University decided to create a Natural History Museum; known today as the Oxford University Museum of Natural History. At this time the natural history elements were removed from the Ashmolean to the new museum.

As early as 1829 the Museum was beginning to receive finds from the new field of archaeology. In the following decades collections from local excavations were donated, as well as antiquities from Rome by J.H. Parker, one of the Museum's keepers. Pieces were purchased from Egypt and the Near East to add to the collection.

From then on large amounts of archaeological material arrived at the Museum until it began to run out of space and the University commissioned a new building.

This was Charles Cockerell's original museum, Museum of Art And Archaeology University Of Oxford, which dates from 1845, and has recently undergone a complete transformation.

Days Out near Ashmolean Museum

Places to Visit near Ashmolean Museum