You are here:  Towns -> Places to Visit in Oxfordshire -> Abingdon

Things to do in Abingdon, Oxfordshire 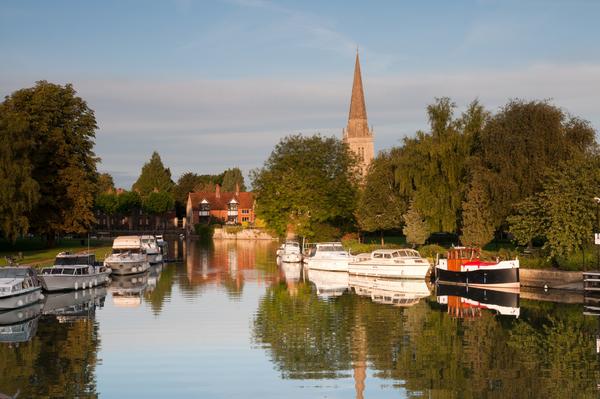 The Thames in Abingdon

You are walking with the past when you visit Abingdon. Sometimes the Thames, which flows under the ancient bridge here, brings with it a mysterious fog.

It shrouds buildings and church spires and when illuminated by the shimmering lights of a winter evening a visitor can be forgiven for thinking he was transported back in time.

Abingdon is purported to be the oldest town in England so is steeped in history. The name means Aebbas Hill and the town was once dominated by the great Benedictine Abbey built in the late 7th century. It is reported that many historical figures have visited Abingdon, including William the Conqueror, Cromwell, Samuel Pepys and Prince William of Orange.

Taking a stroll in historical Abingdon can be richly rewarding. There remain many fine old buildings such as the old County Gaol of Berkshire built between 1805 and 1811 by French prisoners during the Napoleonic wars.

Though sadly boarded up it is a wonderfully evocative structure and requires only a small leap of the imagination to sense ghostly voices bemoaning their fate. It housed all prisoners for Berkshire until it was closed in 1869. 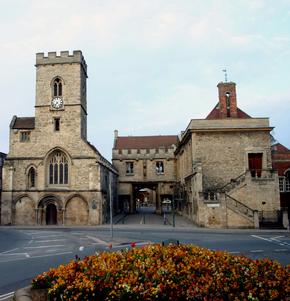 Close by is the old County Police Station. John Barnard became the first member of Abingdon Borough Police Force in 1836 when Victorian police worked every day of the week, received only five days holiday a year and were paid only £1 per week!

Dominating the market square is the magnificent County hall built between 1678 and 1684 by Christopher Kempster, a mason who worked for Sir Christopher Wren.

The balconied roof of the Hall is used for the bun throwing ceremony, which began at George III's coronation in 1760.

There are many interesting shops and cafes located round the pedestrian square and there is a regular Monday market that has been established since before 1328.

Located in the enigmatic East Saint Helen's street nearby are several historical gems. It is said that in a room at the 16th century King's Head and Bell Inn the doomed Charles I held a war council.

In May 1644 the Roundheads were stationed in Abingdon. Prince Rupert's men in Oxford attacked many times but the Roundheads resisted until March 1646. Cromwell visited Abingdon in 1645. 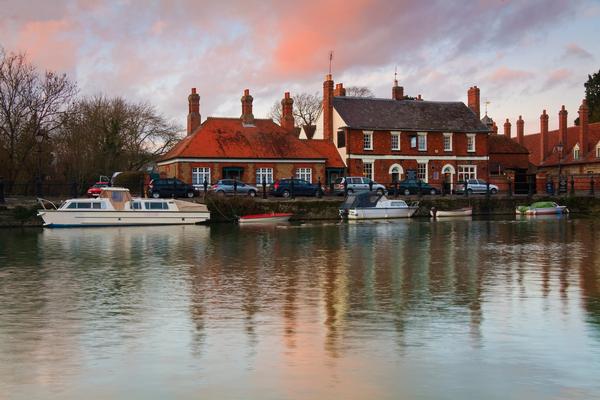 Halfway down this street is the oldest house in the town, a medieval merchant's house built around 1430. This house contains medieval windows, fireplaces and wall paintings and is well worth booking a visit.

It is fascinating to imagine William, Prince of Orange, walking this street on his way to London from Torbay to claim the throne from James II. He rested one frosty night in December 1685 in the house of Thomas Medleycott and a blue plaque outside his house commemorates this.

He may have admired the impressive spire of the 10th century Saint Helen's Church located at the fork of east and west Saint Helen's street. Perhaps he took a look at the nearby Long Alley Almshouses built in 1446 by the Fraternity of the Holy Cross. He may even have been moved to give alms here as did Samuel Pepys. 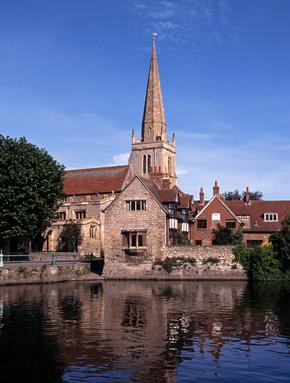 A visitor may be enticed into sampling some of Abingdon's famous Old Speckled Hen ale at the Old Anchor pub located on the 19th century Thames promenade. Here he can admire the deceptively serene river, watch the swans and imagine it as the thriving wharf it once was with all the hustle and bustle of local trade.

Brewing and MG cars were once two of the towns biggest industries, the ale named after an MG van which used to dart round the brewery like an…old speckled hen!

Every October the old Michaelmas Hiring Fair is held in Ock Street, a wonderful noisy occasion to look forward to. Next to Saint Nicolas' Church is the 12th century Abbey gateway.

Passing under this gives a view of the few remaining original structures of the Abbey where it is said William the Conqueror celebrated Easter in 1084.

Turning right past the Guildhall, the romance of the past strikes you again in the shape of the Checker Hall, a mid 13th century building now the Unicorn Theatre. Tucked away, this Elizabethan style gem, built in 1953, hosts many excellent productions.

With its appealing history, interesting shops, pavement cafes or even the chance to take a boat on the river, Abingdon is well worth a visit.

Days Out in Abingdon

Places to Visit near Abingdon