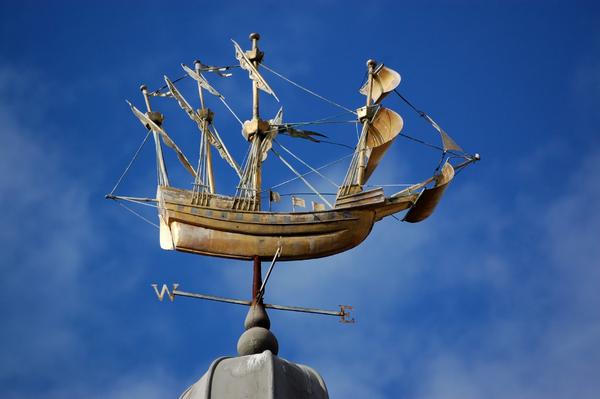 In the past, merchant ships had been used as instruments of sea warfare. Soldiers and sailors would be put aboard these trading vessels, along with whatever weaponry would fit. Being more interested in battle wagons, however, the Eighth Henry made ship-building a priority.

By extending, or building new, the dockyards at Deptford, Woolwich, and Portsmouth, forty-six warships were constructed under his auspices, as well as thirteen small galleys. Twenty six vessels were purchased fully built, while an additional thirteen joined his fleet due to capture.

Under Henry Tudor, ships meant for pure warfare could hold an average of 200 sailors, 185 soldiers, and 30 gunners.

With Henry and his courtiers from Greenwich as witness, the greatest Tudor ship ever built, 'Henry Grace A' Dieu', was launched on June 13, 1514. 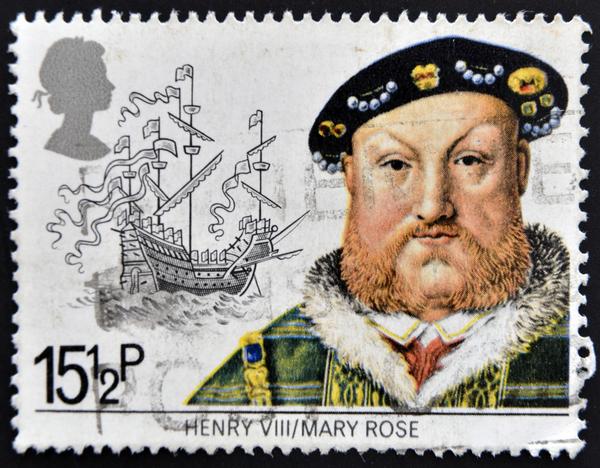 Henry VIII and the Mary Rose

Nicknamed 'Great Harry', at between 1000 and 1500 tons she was graced with five decks and more than 200 hundred bronze and iron cannons. An inventory for her shows that she was meant to carry 400 soldiers, 260 sailors, and 40 gunners.

In 1545, Henry was aboard when the French fleet came into sight. Quickly leaving her decks, Henry was put ashore to watch the oncoming confrontation. 'Great Harry' acquitted herself well, although another of Henry's vessels went to the bottom...the 'Mary Rose'.

In 1553, while at her berth in Woolwich, the 'Henry Grace a' Dieu' caught fire and sank.

'The Anne Gallant' and 'Greyhound'

Both of these galleys are mentioned in a dispatch as being involved in a skirmish with the French in 1546. They are both described as being relatively new Tudor ships.

In 1568, 'Anne Gallant' was still active. There is a record of her visiting the Port of London as a trade ship in that year. No further mention of 'Greyhound' has been found.

'The Sovereign' and 'The Regent'

These were two of the seven Tudor ships Henry inherited from his father. Both were 4-masted carracks (a merchant-type style) at just over 600 tons each. Being at least 20 years old, they would have been in Henry VII's possession (either built, captured, or conscripted) four years after he came to the throne.

In 1512, 'The Regent' was lost in battle against the French. The building of 'Henry Grace a' Dieu' was meant to replace her.

The last record found of 'The Sovereign' was when she was sent to Portsmouth for repair in 1520.

Believed to have been named after Henry VIII's favorite sister and the dynasty's emblem, this Tudor ship was Henry's favorite.

Along with 'Peter Pomegranate', her sister ship, 'Mary Rose' was built between 1509 and 1515. Mary Rose was the first ship able to fire a broadside, and was wanted for the expected confrontation with the French in 1545.

'Mary Rose' went into refit 30 years after her original construction, and it is possible that this refit was her doom.

With the French in sight, 'Mary Rose' unfurled her sails, prepared to join battle, and then completely, unexpectedly, and quickly, keeled over. This favorite Tudor ship vanished beneath the waves- in full view of Henry VIII, the other members of the Royal Fleet, and the French.

Why? She hadn't suffered any damage from the invading armada. The consensus seems to be that her refit, just months before, made her top-heavy. Executing a fast turn and going into battle with gun portals open, a gust of wind caught her sails, and she toppled to starboard. 500 men drowned.

Of all of Henry VIII's ships, 'Mary Rose' is the most famous. A good portion of her can be viewed in Portsmouth, as well as a museum dedicated to the artifacts brought up along with her timbers.

In a nutshell? Extremely cramped, especially for Tudor explorers at sea for months on end. Headroom below deck was at a premium. Sleeping quarters were also at a premium, so many sailors elected to sleep on deck. Hammock weren't invented until the late 1590's.

For long voyages, fresh food and water was a luxury. Salted, smoked, or pickled food was everyday fare. Although, if fresh meat was really wanted, the mice aboard the Tudor ships could possibly come in handy.

Personal cleanliness? Good sanitary facilities were unknown and conditions were usually wet. Clean clothing was unheard of, most sailors only having one set of clothes to wear day and night.

While large Tudor ships would carry a surgeon, diseases still ran rampant. Dysentery was commonplace, as was scurvy. It would be another 150 years before the cure for scurvy was found... vitamin C.