Autumn is the season for harvesting fruits, as Mother Nature provides a host of berries, fruits, acorns and nuts for wildlife to store or feed on for the forthcoming winter.

In parks, gardens and along roadside verges around Britain, children will be found beneath lofty Horse Chestnut trees scavenging for conkers.

Horse chestnuts are not actually indigenous to Britain; they were introduced in the late 16th century from Eastern Europe.

There are now an estimated 470, 000 horse chestnut trees across the country. 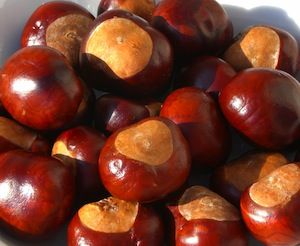 but they may be eaten by deer, cattle and horses, despite their bitter taste.

They were said to make a horse's coat shine.

Extracts from horse chestnuts have been used in the past to treat (not necessarily with any success) malaria, rheumatism, frostbite, ringworm and varicose veins!

They were put in wardrobes to prevent moths and placed in the corners of a room to discourage spiders. 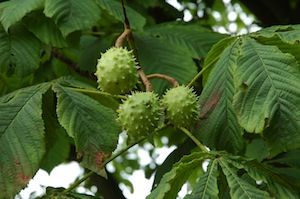 Horse chestnut trees are laden from September onwards with round green balls with prickly casings. When ripe, these seed pods fall to the ground, split open and reveal several shiny brown fruits called "conkers", or "buckeyes" in the USA.

They have been used for centuries to play the traditional game of conkers and there is even a World Conker Championships held each year in Oundle, Northamptonshire.

The traditional game of conkers is named from the word "conquer" as contestants try to conquer one another’s conkers! 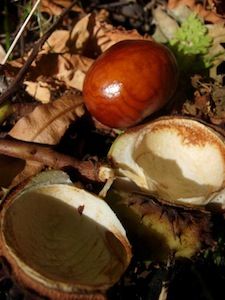 How to Play the Game of Conkers

Drill or skewer a hole through your conker and thread it onto an old shoelace or strong string about 25cm long. Tie a big knot to stop the string from pulling through.

The winner of a coin toss can choose to hold their conker out or strike at their opponent’s conker first. One player suspends the conker on its string and holds it out at arm’s length. The striker wraps the string around one hand securely, leaving about 10cm string next to the conker. He/she pulls back the conker with the other hand and then lets go, trying to hit (and destroy!) their opponent’s suspended conker.

If they miss, they can have up to two more attempts. If they hit the conker but do not destroy it, then it is their turn to hold out their conker for their opponent to try to hit it. 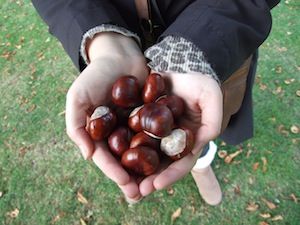 If the strings tangle, the first person to call "strings" gets a bonus shot. The game continues until one of the conkers is destroyed.

Scoring is complicated! The victorious conker gets the score of all the defeated conker’s triumphs. In a game of two new conkers, the winner becomes a one-er.

However, if either (or both) conkers have already beaten other conkers, the victorious conker assumes the total of its own wins, plus the opponent’s score, plus one for beating this opponent. So if a four-er beats a two-er, it becomes a seven-er.

Have fun this autumn finding and playing conkers!