You are here: Articles -> Seasonal Features -> A Closer Look at April Fool’s Day

April Fool's Day is celebrated on April 1st, but no-one can quite pinpoint its origins. It is a fun day when people play tricks on one another, and the victim is called an April Fool.

It may have evolved from the arrival of spring with its capricious weather, or have its roots in spring festivals when people would wear disguises and play pranks on each other.

The most popular theory is that April Fool's Day evolved after the adoption of the Gregorian calendar in Europe in the late 16th century.

On the old Julian calendar, the New Year was a week-long event ending with the New Year commencing on April 1st. Under the new Gregorian calendar however, January 1st became New Year's Day.

At that time news spread slowly and change was gradual. Many people had not heard that New Year's Day was in January, or perhaps they chose not to go with such modern tendencies, so they still celebrated New Year's Day on April 1st.

They became known as April Fools, were given mock gifts and had tricks played upon them. They may have been sent on a false errand, invited to a non-existent party or other harmless practical jokes.

April Fool's Day Around the World

In Scotland, April Fool's Day is known as Taily Day. Pranks often focus on the "behind" and typically a "Kick Me" sign may be attached to the back of the unsuspecting "fool" who is called an April Gowk.

In England, any April Fool's Day jokes must be played before noon and the victims are called "gobs" or "noodles". 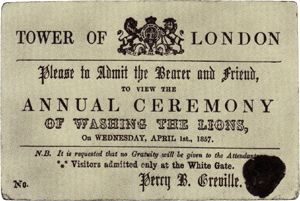 In the USA, a favourite April Fool's Day prank is to send someone on a false errand to search for something that doesn't exist.

In France, victims of pranks are known as "April Fish", as young fish are naive and more easily caught. Often a paper fish is attached to the victim's back.

There was a popular prank in the 19th century, when fake invitations were sent out inviting people to the Annual Ceremony of the Washing of the Lions at the Tower of London. When the unsuspecting recipients arrived at the Tower on April 1st, there was, of course, no ceremony taking place!

Eventually the news media caught on to the idea of playing an April Fool's Day joke on their gullible and unsuspecting clientele, as a bit of harmless fun. One of the best was created by the rather serious BBC news program, Panorama.

Back in 1957 (I'm sure you have guessed the actual date!) they showed a spoof documentary about the mild winter and lack of spaghetti weevils giving Swiss farmers a larger than expected crop of spaghetti. They even showed film of Swiss farmers apparently pulling spaghetti strands out of the trees.

The BBC was soon inundated with requests for information about where the spaghetti trees could be sourced. They tactfully suggested viewers should plant spaghetti sprigs in a tin of tomato sauce and see what happens! 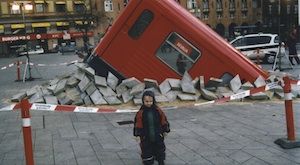 In America in 1985, Sports Illustrated published a story about Sid Finch a new player for the New York Mets baseball team. Apparently he could throw a ball at 168mph with deadly accuracy, trained in a Tibetan monastery and had never played baseball before. Mets fans were jubilant!

The writer of the piece did leave a subtle sign in the subheading which ran, "He's a pitcher, part yogi and part recluse. Impressively liberated from our opulent life-style, Sidd's deciding about yoga - and his future in baseball". The first letter of each of these words spelt: "H-a-p-p-y A-p-r-i-l F-o-o-l-s D-a-y - A-h F-i-b".

On 1st April 2001, there was spectacular prank involving the new subway system in Copenhagen. The stunt involved a half a dis-used subway car - it was placed in front of the Town Hall, with lots of loose paving stones around it, to make it look like the car had burst through from the tunnels to the surface!

So check your calendar, check your back on April Fool's Day, and arm yourself with a good sense of humour, just in case!