You are here:  Attractions -> Things to Do in Lothian -> Scottish Parliament

Love it or hate it, the Scottish Parliament building is one of Scotland's most unusual contemporary buildings. 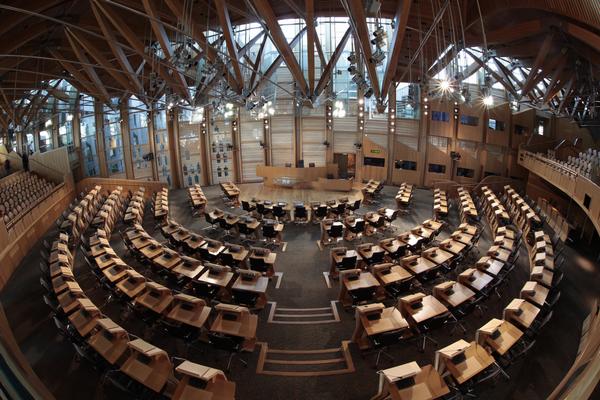 It was built to house the 129 Members of the Scottish Parliament (MSPs) following the creation of a Scottish government and devolution of power to Scotland from Westminster in 1997. 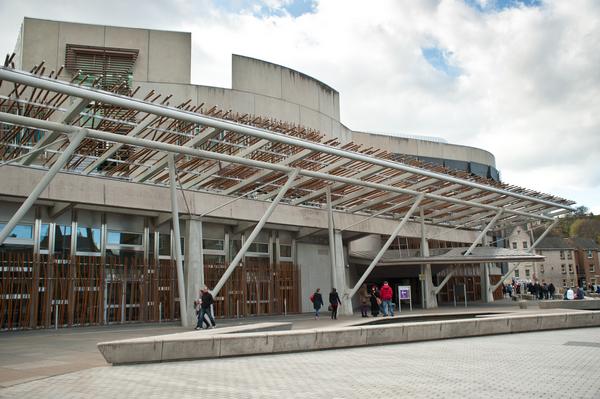 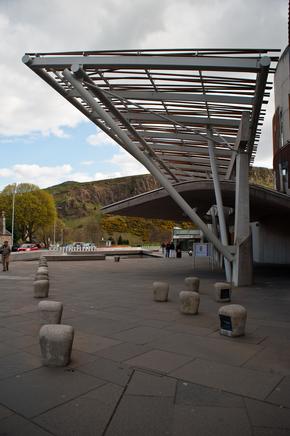 The original Scottish Parliament began in the 13th century and lasted until 1707, when the Kingdoms of Scotland and England merged under the Acts of Union and became the Parliament of Great Britain.

The new Scottish Parliament is not one, but several buildings which stand at the bottom of the Royal Mile.

Significantly, it stands next to Holyrood Park, the royal residence where the Queen entertains in an official capacity.

After many delays and overrunning the original £50 million budget by a further £364 million, the Scottish Parliamentary building was opened by the Queen in October 2004.

In 2005, the building received the Stirling Prize from the Royal Institute of British Architects.

The Architecture of the Scottish Parliament

He drew inspiration from the upturned boats along the coast and from the surrounding landscape, intending the building to "arise from the sloping base of Arthur's Seat and arrive into the city almost surging out of the rock". 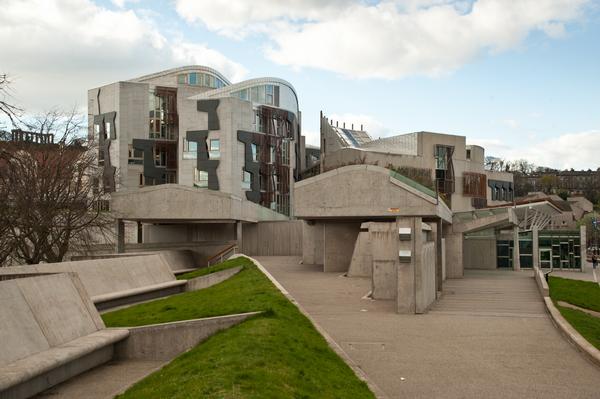 View To Side Of Main Parliament Building © AboutBritain.com

Miralles unfortunately died before the construction was completed, and the project was overseen by his wife. 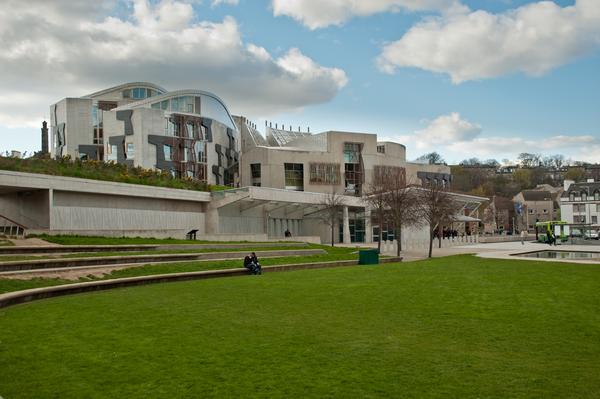 Many people argued against the cost and upheaval caused by constructing a new parliament building when many large older buildings in Edinburgh remained unoccupied. 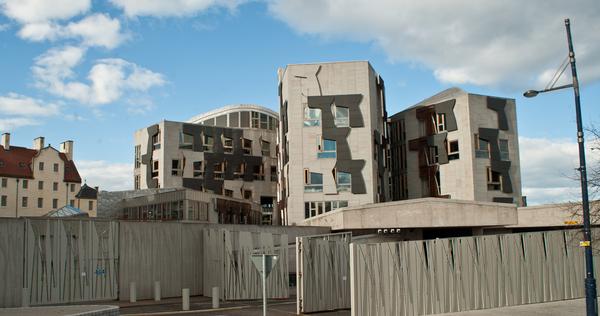 Back Of Main Parliament Building © AboutBritain.com

However, the new building was able to encapsulate everything Scottish, even down to the thistle doorknockers, the national symbol of Scotland. 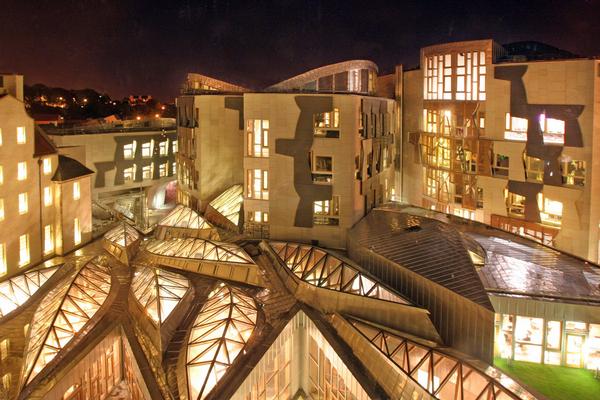 The Old and The New

A lintel from the original 1707 Parliament building was incorporated into the new parliament doorway as a symbolic gesture and is called the Arniston Stone. 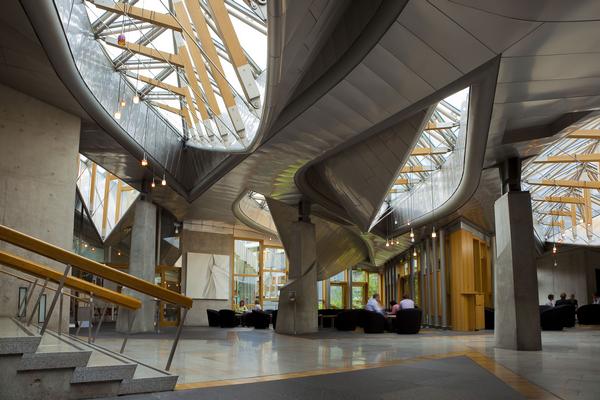 To counter modern-day terrorism, the building was designed to be blastproof.

As well as the hi-tech debating chamber with a public gallery, there are committee rooms, a garden foyer and the offices of the MSPs and their staff.

The complex also includes the newly restored Queensbury house, a Grade A listed building dating back to 1697. 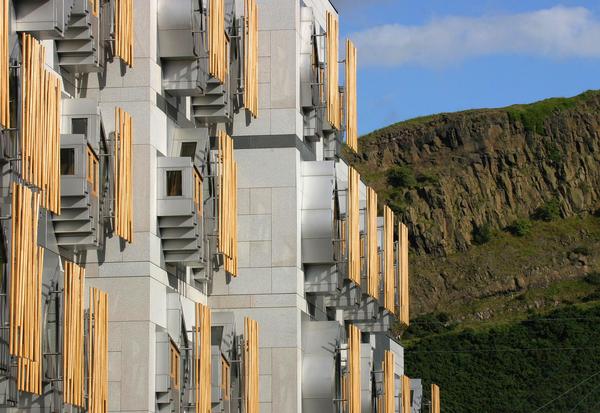 Side View With Salisbury Crags In Background © Scottish Parliament

Throughout the Canongate building there are 26 quotations and excerpts from Scottish poetry and literature carved into the stonework.

The three dimensional effect on the exterior of the building is due to projecting window seats which allow the MSPs to sit "outside" the building. 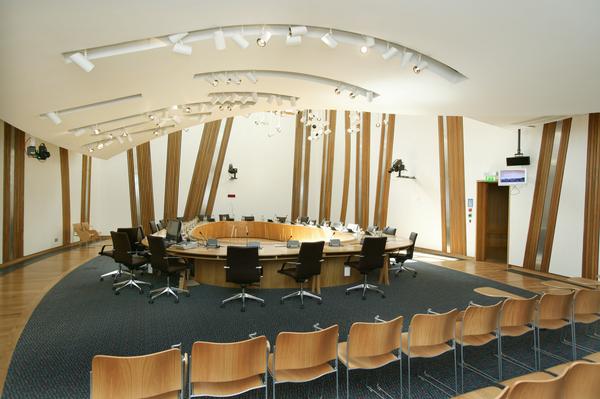 The public foyer has concrete columns and a low ceiling decorated with impressions of the saltire (the cross on the Scottish flag). Critics say it feels like a cathedral crypt. 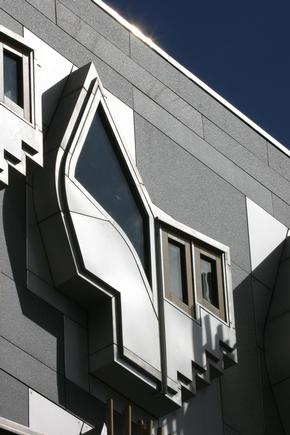 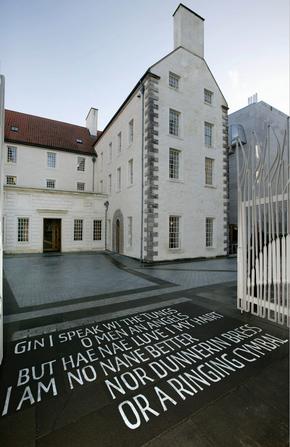 As well as housing the MSPs, the Scottish Parliament building is open to the public with free admission.

It is well worth exploring this fascinating Catalan designed contemporary building. 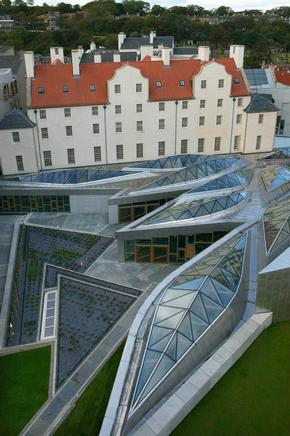 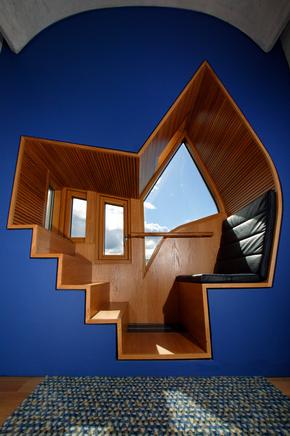 Learn about Scottish political history, watch the live parliamentary debates and take a free tour to appreciate the architecture of Edinburgh's most distinctive modern building.

Once you have taken the tour and explored the exhibits, you may want to linger over refreshments in the cafeteria and discuss the merits and flaws of this controversial building for yourself!

Days Out near Scottish Parliament

Places to Visit near Scottish Parliament