You are here:  Attractions -> Things to Do in Shropshire -> Hodnet Hall Gardens 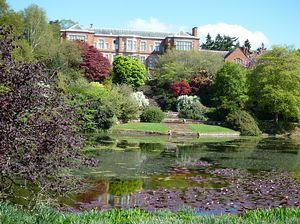 
Winner of the Christies Historic Houses Association "Garden of the Year" Award for 1985, and subject of numerous BBC radio and television programmes.

Over 60 acres of brilliantly coloured flowers, magnificent forest trees, sweeping lawns and a chain of ornamental pools which run tranquilly along the cultivated garden valley to provide a natural habitat for waterfowl and other wildlife.

These are just a few of the many attractions of the Hodnet Hall Gardens which ensure that, no matter what the season, visitors will always find something fresh and interesting to ensure a full and enjoyable day's outing.

Brings to Hodnet the wealth of Glorious Daffodils which have helped to make the Gardens famous.

Rhododendrons thrive in lime-free soil and a great number of varieties bloom from March to July.

New varieties of Rhododendron and Prunus flourish, complemented by Cornus, Viburnum, Acers, Malus and many other highly coloured shrubs planted in the Garden against a backdrop of magnificent Oaks, Sycamores, Lime and Beech trees.

More colour in the form of Laburnum, Pieris, Davida, Philadelphus and Paeonies among many other "English Garden" and more exotic species.

Late June the Herbaceous plants Germanium, Helenium, and Erigeron all vie for attention with the wealth of Primulas, Erica, Tree Paeonies, Delphiniums and many other species adding their own special beauty to the Gardens.

Means roses and many varieties now come into bloom, from the beds of scented shrub roses to the circular plantings "of Paeonies, Hydrangea Grandiflora,  Lavender and Caryopteris."

This makes July one of the most delightful times of the year at Hodnet.

The plantings of Fuschia add vibrancy of their own, and more exotic flora are represented by the towering Yuccas, Bamboos, and many different varieties of fern.

The perfect time to visit the Water Gardens with their small pools and water-falls surrounded by great drifts of white, rose and bright red Astilbes.

White, pink and yellow water lilies carry colour across pools to break the reflections of the overhanging trees and shrubs.

And as the nights draw in, the Garden Landscape becomes still richer.

The many varieties of Acers, and Birches, Sorbus, Berberis and Cotoneaster are just a few examples of the trees and shrubs making up a bright Autumn display.

Days Out near Hodnet Hall Gardens