You are here:  Attractions -> Things to Do in West Yorkshire -> East Riddlesden Hall 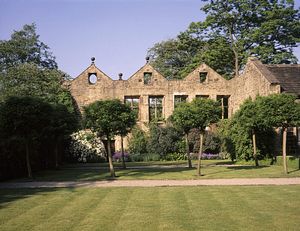 East Riddlesden Hall was a thoroughly Yorkshire stately home of the Murgatroyd family with a medieval barn, a fish pond and a collection of ghostly figures connected to some of the family's more unsavoury tales.

The estate was bought in the 1630s by James Murgatroyd, a wealthy clothier who set about building the present low-built house on a bluff above the River Aire. The impressive two-storey front entrance porch still welcomes visitors with its classical columns and ecclesiastical style rose window.

The soot-blackened stone facade reflects the industrial roots of this area of West Yorkshire. It has mullioned windows and the impressive Great Hall links the house to a further wing which is now just a facade. From 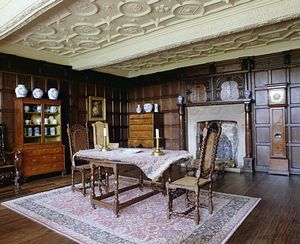 The Murgatroyd family were infamous for their debauchery and profanity. Various generations were in turn either fined, imprisoned or excommunicated from the church. W.S. Gilbert based his Bad Baronet characters on the Murgatroyd family and it is said that the River Aire below the house changed its course in protest at the family's affairs!

The hall was saved from dereliction by the Briggs Brothers in the earlier 1930s and shortly afterwards was acquired by The National Trus.

One of the lovely and unique treats about touring East Riddlesden is the fact that it is packed with locally made period furniture, including a carved and canopied 17th century cupboard which was described by Emily Bronte in "Wuthering Heights".

Costumed guides in the summer will point out the magnificent oak settle, the copper curfew which kept the embers of the fire aglow all night, a grain chest and a shepherd's chair, complete with a hutch for a lamb or dog beneath the seat!

The Great Hall remains a huge barn-like space with a massive fireplace and a fine collection of pewter, just as it would have been used for receiving 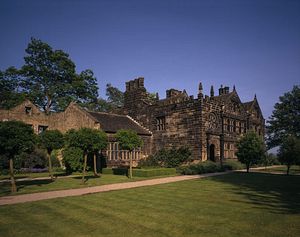 guests in the 17th century.

Troubled spirits said to roam East Riddlesden Hall include the white figure of the lady of the manor who was thrown from her horse and drowned in the fish pond and a grey lady who was locked in her room and starved to death after her husband discovered her with her lover. Needless to say, the lover fared no better and appears floating by the wall behind which he was bricked up alive.

Visitors who find time to visit the hall on New Year's Eve will see a cradle rocked by an unseen hand which heralds in each New Year.

If the interior leaves you feeling chilled, step out into the glorious gardens designed by Graham Stuart Thomas for the National Trust. They are a profusion of bright colour to dispel any gloom.

In the spring the gardens are decorated with pink cherry blossom, daffodils and early clematis. In the summer the lavender beds and roses fill the gardens with fragrance and the bird-feeding station is well visited by all manner of small feathered friends. There is a Wild Garden and children can enjoy the maize field, the duck pond and the playground while adults frequent the café and gift shop.

Days Out near East Riddlesden Hall