You are here:  Attractions -> Things to Do in Derbyshire -> Dovedale 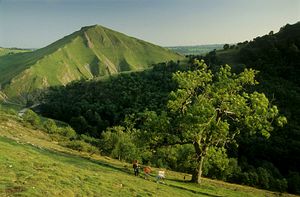 
Dovedale is one of the most visited sites in the Peak District. The River Dove babbles through this shady limestone gorge and the highlight for many is crossing the river by a series of stepping stones.

This pretty attraction in the Derbyshire Dales has recently been upgraded to National Nature Reserve status, as well as already being a Site of Special Scientific Interest due to its rich biodiversity.

In fact it has a full set of titles, including being an official Area of Outstanding Natural Beauty, so for those who have not yet visited, imagine the treat that awaits you!

Dovedale made history in 1934 when it was generously gifted to The National Trust by Sir Robert and Lady MacDougall, Mr. F. 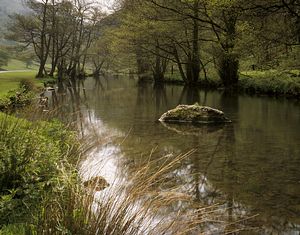 Holmes and I.C.I., along with the suggestion that it should be made Britain's first National Park. In 1951 it was incorporated into the larger Peak District National Park and is now enjoyed by two million visitors per year.

Dovedale begins just north of Ashbourne at Thorpe Cloud. The dale follows part of the course of the River Dove, which flows from Axe Edge in Buxton for 45 miles until it reaches the River Trent. Along the way it defines the boundary between Derbyshire and Staffordshire, before reaching the tranquil beauty of Dovedale.

Over the millennia the river has carved out limestone formations such as Lion's Head Rock, Raven's Tor, Reynard's Cave and Lover's Leap. The caves in the Dove Valley have been inhabited since the last Ice age and Reynard's Cave was used by Bronze Age farmers to bury their dead.

There are several places to start your visit to Dovedale. Biggin Hill is a long dry valley which runs down to meet the River Dove at Peaseland Rocks. Milldale Village provides a great starting point for your walk through Dovedale as it is itself a conservation area brimming with wild flowers, birds, insects and wildlife.

Either way, enjoy strolling the three mile stretch of the Dove 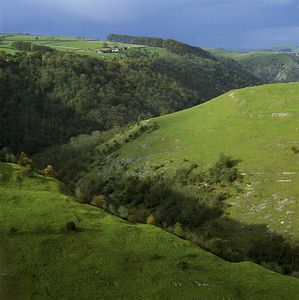 Valley on flat limestone trails beneath the shady trees and rocky crags. The broad river banks are ideal for picnics and children play for hours in the shallow water.

There is a famous Viator bridge across the river, but most people choose to use the stepping stones which were originally laid across the river for Victorian tourists who would take donkey rides along the gorge. As the saying goes, there's been plenty of water under the bridge since then. Fortunately the broad flat stones are big enough for strangers to pass midstream without too much inappropriate intimacy!

From the valley bottom, some visitors choose to climb up nearby Wolfscote Hill which towers above Dovedale to a height of 388m (1,272 feet). From its boulder-littered summit there are far-reaching views of the Dovedale Valley in both directions.

Hill walkers, mountain bikers, climbers, botanists, photographers and cavers all find something to enjoy at Dovedale. Visitors may see local hang gliders and paragliders who launch from the hill nearby. The River Dove is particularly popular with anglers and is known for its fine trout fishing.

To complete your visit to Dovedale National Nature Reserve, the Ilam Park Visitors Centre has an excellent exhibition which covers the White Peak area and the geology of Dovedale through a touch screen exhibit.

Days Out near Dovedale

Places to Visit near Dovedale