You are here:  Attractions -> Things to Do in West Sussex -> Devil's Dyke 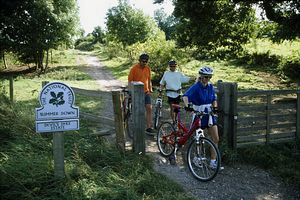 The sinister sounding Devil's Dyke is a huge dry chalk valley and a historic beauty spot on the South Downs. To make it a fun day out on a sunny day, travel the 8km (5 mile) journey in an open topped double-decker bus which regularly runs to Devil's Dyke from Brighton Marina.

Devil's Dyke covers around 200 acres of downland scarp. It extends for 12km (7 miles) from Reach to Ditton Green and has a 6m high bank or earthworks which was probably built as a border defense in the 5th or 6th century to protect the kingdom known as Calchfynedd.

The area is a great amenity for cyclists, hikers, dog-walkers, horse riders, kite-flyers and those wanting to escape 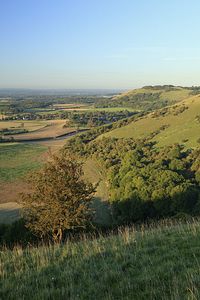 from London or Brighton for a breath of fresh air, scenic views and an unspoilt green landscape.

The legend behind the name "Devil's Dyke" says that one night the devil dug the valley to allow the sea in to drown the god-fearing parishioners who lived on the Weald. Unfortunately his noisy digging awoke an old woman and he was driven off by a candle she lit which looked like sunrise.

Some say a lump of earth from his cloven hoof fell to earth and became the Isle of Wight. Others blame his heavy footsteps for creating the Devil's Punch Bowl nearby.

However, other more informed sources such as local geologists say that Britain's largest and deepest chalkland dry valley was carved out during the last ice age.

Devil's Dyke does have signs of more recent history. Britain's first cable car was built here in 1894. It was a great sightseeing attraction for Victorians eager to try anything new. The ride took them on a 300 metre ride across the valley, but at a time when airplanes had 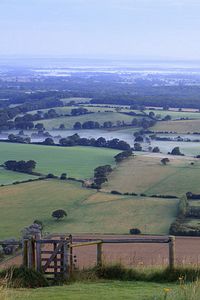 yet to be invented, this airborne ride was probably quite a thrill. All that remains today are the concrete foundations which supported the towers.

By 1897 there was another exciting ride - a funicular railway. By 1897 almost a million people a year visited Devil's Dyke and the ride was very popular up and down to the village of Poynings. Look for the brick plinth which marked the site of the boarding platform, and follow the track lines down the hillside.

As visitors walk around the hill, evidence of even older history can be seen. The grassed-over ramparts and walls of an old hillfort can clearly be seen.

More natural scenery unfolds in the South Downs landscape, along the South Downs Way with gently rolling hills descending to the plain below. There are stunning views northwards to the Weald and south as far as the English Channel on a clear day.

The chalk grassland is home to some rare and unusual wildlife including colourful orchids and bright butterflies as well as being well-grazed by local sheep and cows.

Days Out near Devil's Dyke

Places to Visit near Devil's Dyke