You are here:  Attractions -> Things to Do in East Sussex -> Brighton Pier 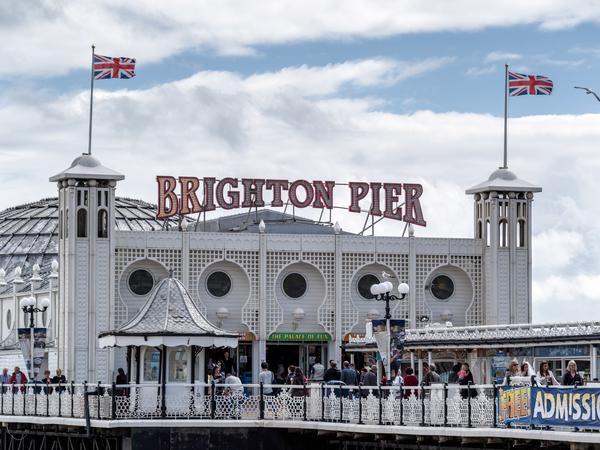 The long metal trestle supports the grand white domed pavilion and a variety of fairground attractions, roller coaster rides, bars and the Palace of Fun Arcade. 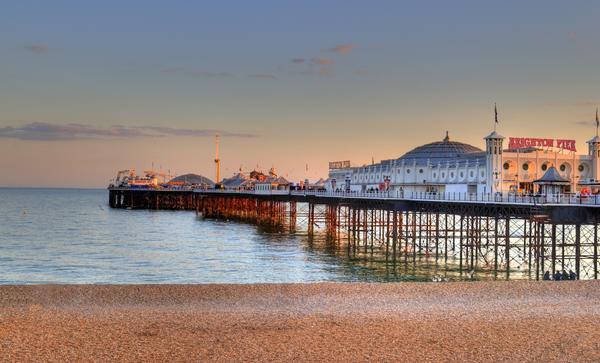 © Shutterstock / Mitotico
Situated opposite the Sea Life Centre and close to the Brighton Wheel on the promenade, Brighton Pier is hard to miss.

It is currently free to access and enjoy a stroll.

The best-known highlights are the Palm Court Fish Restaurant and the two bars: Horatio's Bar and Victoria's Bar which both have live music, TVs and a beer garden.

The pier stretches for 1,722 feet (525 metres) and its many fans claim it is the finest pier ever built. 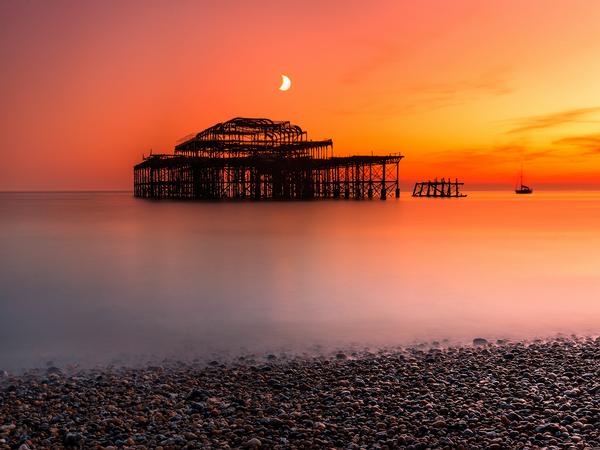 West Pier Remains © Shutterstock / piotreknik
It has certainly outlived its competition which included the derelict West Pier, which was closed in 1975, and the Chain Pier which was dismantled in 1896.

Now known as the Brighton Marine Palace and Pier, it first opened to cater for the demands of the Victorian day trippers from London in 1899, although construction was not completed until 1901. 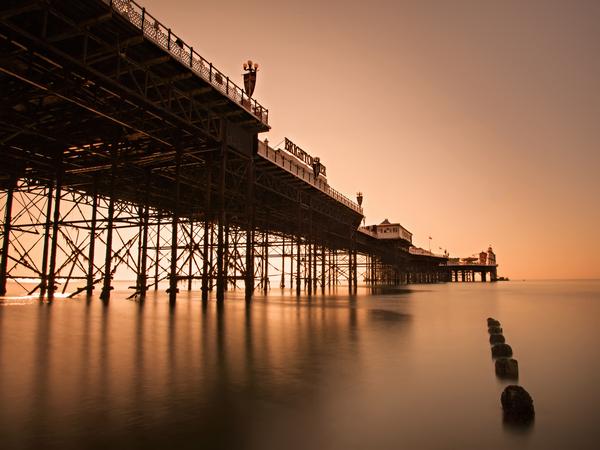 © Shutterstock / piotreknik
It offered a place to stroll out over the waves and enjoy some healthy sea air, games and food stalls.

Once the pier concert hall was completed there were shows and entertainment. They were so popular that a theatre was added in 1911 for slightly more upmarket entertainment. 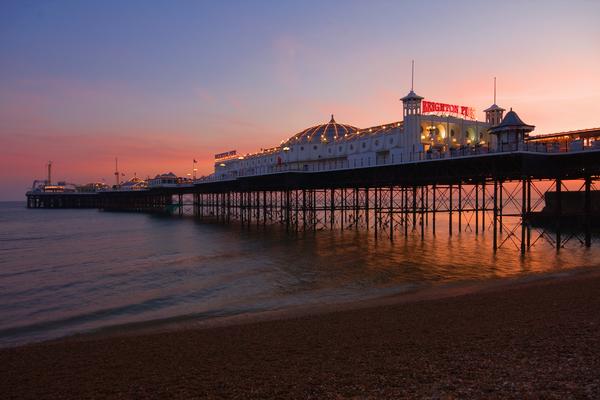 © Shutterstock / Scotshot
A Ferris Wheel was added in 1932 when the pier was extended and widened.

Entertainers such as Dick Emery and Tommy Trinder were popular acts during the early 1970s but the theatre was closed permanently after a barge damage the pier head during a storm in 1973. 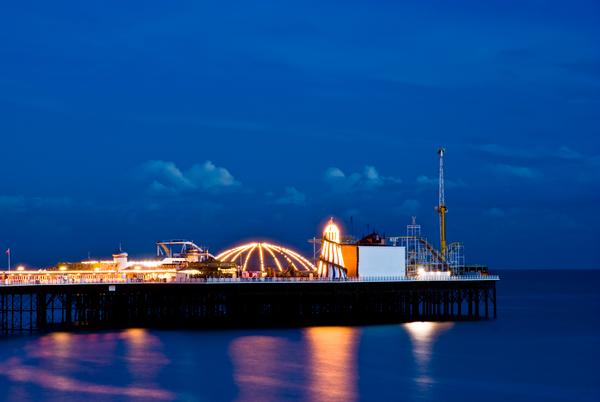 © Shutterstock / Francesco Carucci
The pier was damaged by fire in 2003 but has since been wonderfully restored and is now a Grade 2 listed building of significant architectural interest.

Brighton Pier is a mini theme park with several exciting rides for those who want to be launched from 0-60 mph in 3 seconds, or dropped from a height of 124 feet (38 metres). 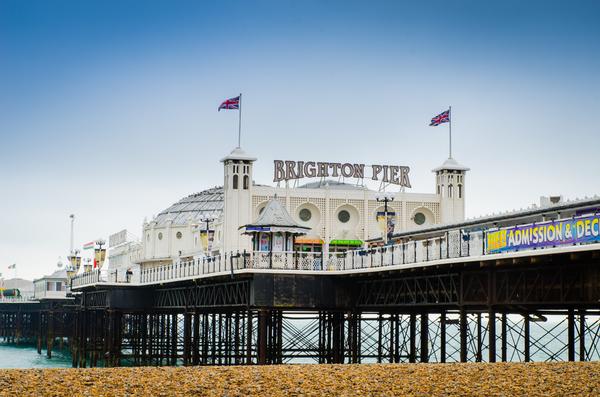 The Palace of Fun Arcade has slot machines and traditional arcade games where you can test your skills at driving or shooting.

Brighton Pier continues to entertain after dark with karaoke in the Glitter Ball Bar and plenty of music, drinks and live entertainment.

© Shutterstock / Matt Gibson
The pier restaurant claims to serve the best fish and chips in Brighton, and undisputedly has the best sea views.

Other fast food options can be found in the Brighton Pier Food Court. 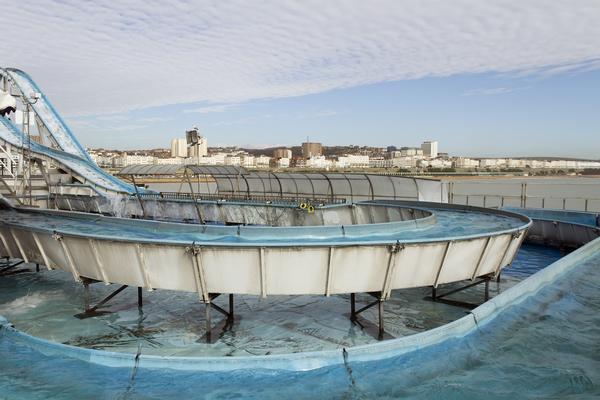 © Shutterstock / Ratikova
As well as seagulls, you may spot porpoises and dolphins frolicking just offshore.

Those looking for an old–fashioned summer holiday people-watching from a striped deckchair with an ice cream in one hand and some colourful postcards in the other will find that Brighton Pier is the perfect place for reliving fond memories of simpler times. 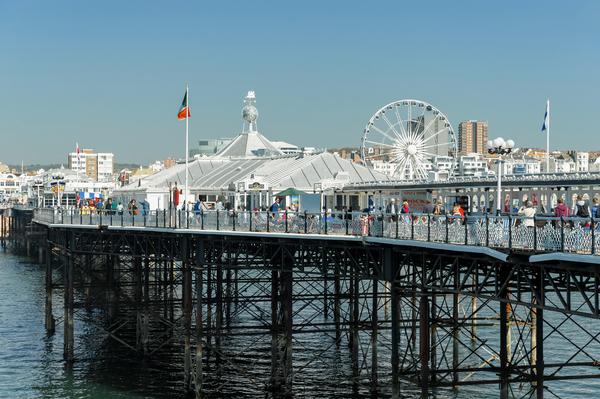 © Shutterstock / Steve Mann
Those looking for wild rides and lively bars are equally well catered for at this very British institution.

Days Out near Brighton Pier

Places to Visit near Brighton Pier