You are here:  Attractions -> Things to Do in Merseyside -> Awesome Walls Climbing Centre Liverpool


Review -
When a friend recommended 'Awesome Walls Climbing Centre' to me for a Birthday Party I was initially clueless as to what 'Awesome Walls Climbing Centre' was! Do a quick search on the internet she told me, so I did. After a flick through the photo gallery I was astonished that a facility like this exists and they allow children to use it!!!

I quickly located the contact details and phoned for a chat to find out a bit more. After a five minute call I'd booked my child's party for ten, being offered free certificates, invites and guaranteed a awesome time, what more could I ask for? 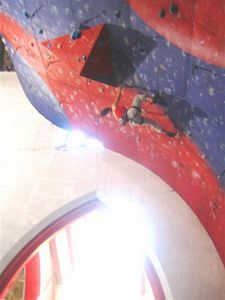 We were greeted by Tom who was one of our instructors for the session (super friendly Claire was the second instructor). He quickly made everyone feel at ease and explained how the climbing session would be run. It was at this point I realised that I would love to try it but today is for the kids, 'I'll be back'.

Once all the harnesses were fitted we made our way to the Traverse Wall were you climb sideways along a short wall just above the ground. Tom explained that this will get everyone warmed up and used to the shapes and feel of the holds. Five minutes later the Traverse was conquered and they were eager for more.

In the roped area the walls go from 6m to a whooping 23.5m, we started on the 6m wall. The rest of the session saw everyone climbing walls of varying angles and heights and having an Awesome Experience.

Whilst the kids were climbing many of the parents sat in the gallery cafe drinking fresh coffee and eating Awesome Muffins watching the fun below.

It's now two months since the party and I've done my 'Taster Session' were I learned the rope work and other tricks of the wall that are required and my son is a regular member of the 'Little Angles' Climbing Club.
A Mum 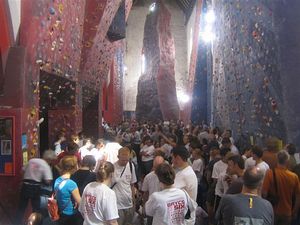 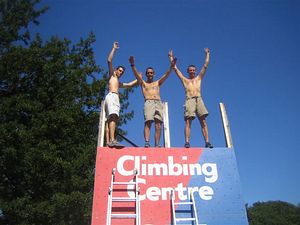 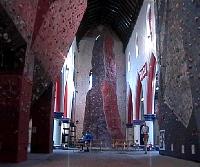 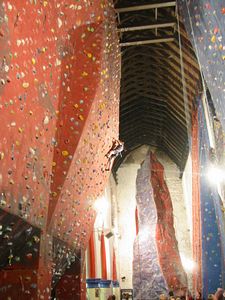