You are here:  Attractions -> Things to Do in Merseyside -> Museum of Liverpool 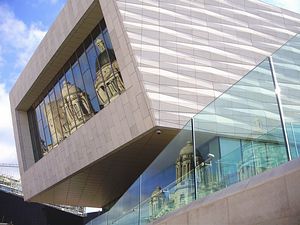 Museum of Liverpool tells the story of the city and its residents with exhibits and objects drawn from National Liverpool's extensive collections.

The museum has three floors, each with their own distinctive galleries. On the Ground Floor there are three galleries (Great Port Gallery, Global City Gallery and Little Liverpool Gallery) along with the shop and café. The first floor has the history Dectives Gallery, the City Soldiers Gallery and the impressive Liverpool Overhead Railway Gallery. The Second Floor has 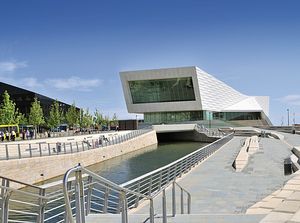 the People's Republic Gallery and the Woundrous Place Gallery.

This gallery shows Liverpool's transformation from a tidal inlet on the west coast of England to one of the world's greatest ports.

In the 19th century, transport and communication were important for Liverpool's success in the development of the Liverpool and Manchester Railway in 1830, the first intercity railway in the world.

One of the highlights of the gallery is the Lion Railway Locomotive. Lion was one of two locomotives ordered by the Liverpool and Manchester Railway as luggage trains in 1837 (the other was Tiger).

Lion has survived a varied life, including being a stationary pumping engine in Princes Dock; after restoration she become an exhibit on a plinth at Lime Street Station. Then came her celebrity status, being included in films.

Lion took part in railway heritage events, until she was retired from steaming events for conservation reasons. Today you can see this historic locomotive in retirement, the highlight of the Great Port Gallery. 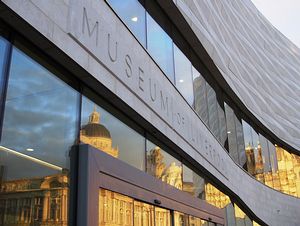 This Gallery explains how, through the British Empire, trade and emigration Liverpool became a global city. The city's culture developed with people arriving from continents around the world. Moving through the gallery you will see diverse and fascinating objects reflecting the background and interests of its population.

This gallery features the Brass Buddha which was taken from the palace of King Thibawin in Mandalay by soldiers of the King's Liverpool Regiment during the invasion of Burma.

A hands on gallery especially for children under 6 years of age to learn and play; children can even create a Liverpool of their own imagination.

A-Z of objects is where children can choose an object for each letter and learn about them through discovery, listening and speaking.

Liverpuddles is a fun hands on popular activity inspired by the River Mersey surrounded by well known landmarks. Children learn by fishing for pretend marine creatures and teaches them about the importance of keeping clean waters for wild life.

and toddlers are made welcome in this gallery in the 'Liverbirds Nest', a soft play area for babies and their carers.

Also on the Ground floor are the Café and Shop.

What was here and how do we know that? You can fine out the answers in this gallery by exploring an interactive map and the Time Travellers dateline, which forms the main feature of the gallery.

This gallery features the Huxley Hoard - a collection of Viking Silver, which was buried for safekeeping. The hoard comprises of 21 bracelets and one ingot, it was found near to Huxley in Cheshire in 2004.

One of Britain's oldest regiments is the King's Regiment, it was created in 1685 and became Liverpool's regiment in 1881. This gallery tells their story.

This old established regiment have served in both World Wars, in Africa, America, Asia and Ireland. In 2006 the King's Regiment became part of the new Duke of Lancaster's Regiment, the infantry regiment of the North 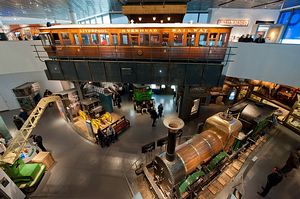 West. Soldiers in the new regiment continue to be called 'Kingsmen'.

The City Soldiers Gallery features the Tower of Medals, an impressive collection which shows a comprehensive display of medals awarded to Kingsmen from 19th century to the present day. The gallery is home to an interactive database, which will help you identify your relative's medals.

The Railway was the first electric elevated railway in the world. This gallery shows why and how the railway was built in 1893, along seven miles of dockland. Stories are told of the workmen and early travellers who journeyed on the railway. The railway was eventually demolished in the late 1950s.

In the museum today you can climb into the carriage, which is fixed 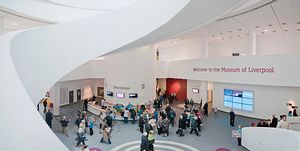 Is all about the city of Liverpool and what it means to be a Liverpudlian and how the people have contributed to their environment. Large feature windows give stunning views over the waterfront. To help visitors understand what can be seen; a touchable model has been made to trigger sounds, which brings the view to life.

This gallery features Court Housing - a reconstruction of a courtyard of cheap houses built for the large numbers of people who moved into the city to seek employment. There is a short film illustrating the houses and what life was like for people living here.

There is also a life size replica of the Liver Bird sculptures on top of the Liver building. Throughout the museum you will see many liver birds and have fun following the liver bird trail.

the Ford Anglia. It was offered as a prize in a competition by the Liverpool Echo newspaper; the lucky winner was a Mr Taylor, who received his prize on 8th March 1963; delivered to him by the Lord Mayor of Liverpool.

You can find out what Mr Taylor did with the car and what subsequently happened to it, here in the Peoples Republic Gallery.

This gallery celebrates its many talented and creative citizens: artists, comedians, musicians, sports personalities and writers.

Liverpool was the birthplace of a new musical revolution, which took the world by surprise. The Beatles with their fresh new sound excited and entertained new fans and changed the musical world forever. This story is portrayed in "The Beatles Show" in this gallery.

The "Football Show" film also in this gallery shows the history and passion for football in Liverpool. Featuring two boys; one a Liverpool fan, the other an Everton fan. It includes the sadness of the football disasters and the emergence of community spirit thereafter.

Days Out near Museum of Liverpool

Places to Visit near Museum of Liverpool