You are here:  Towns -> Places to Visit in Lincolnshire -> Stamford

Things to do in Stamford, Lincolnshire

Perhaps Stamford's most remarkable aspect is the completeness of its architecture. Many streets and

squares simply have no Victorian buildings, let alone those of the 20th century. It was of course this quality that attracted the BBC to use Stamford as a set for its costume drama "Middlemarch". Once the road signs, street lights and aerials had been removed actors could be filmed walking the streets of Georgian Stamford uninterrupted by the modern street scene.

Burghley House - The "palace in the park" -

the grandest house of the Elizabethan age, a fabulous stately home filled with treasures, located in a beautiful Deer Park landscaped by capability Brown.

Stamford Museum - interpretation of the history of Stamford, here you can meet Tom Thumb, and Daniel Lambert, the smallest and largest of men.

St. Mary - dating from the 13th century. St. Mary has a spectacular spire and is

regarded as the mother church of Stamford.

All Saints - an imposing13th century church extensively rebuilt in the 15th century.

St. John - 15th century and built all of one piece, Lincolnshire style screenwork and angel carvings in the roof. 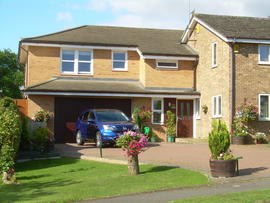 The Lodge at Ketton Park - 4 Miles

more self catering near Stamford...

Days Out in Stamford

Places to Visit near Stamford