You are here:  Towns -> Places to Visit in Cornwall -> Padstow

Things to do in Padstow, Cornwall 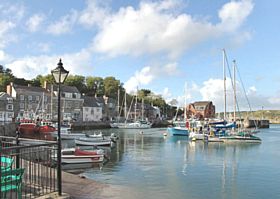 Padstow is built on a hillside overlooking the Camel Estuary.

Padstow was once considered the ecclesiastical capital of Cornwall, from the time St. Petroc arrived here from Ireland in the 6th century, and founded a monastery, hence the name Petroc-stowe, which developed into Padstow.

In the Middle Ages, it was frequently visited by pilgrims from Ireland, on their way to Santiago de Compostela in Spain.

The town has a labyrinth of old crooked streets sloping down to the harbour, where many fine medieval buildings can still be seen.

The 15th century Abbey House, on the north quay, was probably built as a meeting place for local merchants.

On the south quay the 16th century Court House of Sir Walter Raleigh occupied by Sir Walter when he was Warden of Cornwall.

St. Petroc's Church set on a hill above the town is the starting point of the Saints' Way, one of the oldest walking routes in Cornwall, connecting the ports of Padstow to Fowey.

This route originates from the Bronze Age when it was safer to take the inland route than brave the sea journey round Lands End.

In later centuries the path continued to be used by Irish and Welsh missionaries making their way to shrines of Cornwall's Celtic culture.

Prideaux Place - This stunning Elizabethan House offers a unique insight into 400 years of Cornish history. The house is still lived in by the Prideaux family the original owners of the house. Now a major film location with something of interest for all ages.

Trvose Lighthouse - Dating from 1847 this is still an operational lighthouse and tours are available.

Padstow is the home of the centuries old Hobby Horse dance festival, held annually on May Day.

Days Out in Padstow

Places to Visit near Padstow