You are here:  Attractions -> Things to Do in Cornwall -> Trerice 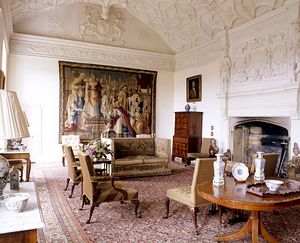 The unpretentious gateway to Trerice leads into the walled garden where two granite Arundell lions guard the path - the first sign that this Elizabethan Manor was once owned by one of the greatest families in Cornwall.

The existing house was built by John Arundell around 1573, although the family had lived on the estate for centuries.

The Dutch-style scrolled gables were perhaps a reminder of his time spent serving Elizabeth I in the Low Countries. Sir John's father had been knighted at the Battle of Spurs and had served under Edward VI and Queen Mary. 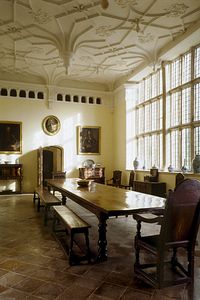 Sir John Arundell was appointed Governor of Pendennis Castle, another local landmark, which came under siege of the Parliamentarians during the Civil War.

By 1802, Trerice had been sold to the Acland family of Killerton who rarely used it, resulting in it remaining largely unchanged until it was sold to Cornwall County Council in 1915.

The gardens and estate were eventually sold off as farms and the neglected house was finally purchased by The National Trust in 1953 for the sum of £14,000.

The north wing was deemed unsafe and had to be rebuilt in the 1950s, fortunately retaining the carved stonework. Those who want an added element of unexplained mystery may want to linger in this wing of the house, as many odd happenings have been reported.

Workmen recall a ghostly person frequently walking past them, accompanied by the sound of crinolines brushing the floor; staff and visitors regularly smell perfume in the empty rooms and a Grey Lady disappears down what was once a circular staircase, now a solid wall.

The weathered limestone house has a Great Hall lit by a two-storey high window to the left of the main entrance. It has an intricate lattice of mullions and transoms supporting the 576 panes of glass, many of which are the original glass which was made in 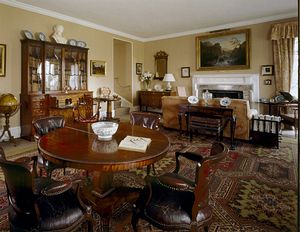 The south facing drawing room was probably once a medieval solar and the barrel ceiling with its elaborate plasterwork and sculpted Elizabethan overmantel are fine examples of the surviving historic interior.

Although the furniture is not the original family heirlooms, there are some pieces of armour, fine Chippendale chairs and oak furnishings typical of the era of Tudor Trerice.

Eighteenth century paintings by local artist John Opie, Stuart portraits and a fine court painting of Charles I are reminders of the family's loyalty to the Crown. These are complemented by a notable collection of antique clocks, glass and ceramics.

Across the cobbled yard are the stables and the magnificent 15th century stone barn, an unusual feature in Cornwall, which now houses an interesting lawn mower collection. Early mowers include some of the first designs after Mr Budding's initial invention in 1831.

The former bowling green where the Home Guard were drilled during World War II and the lawn planted with fruit trees in the 17th century fashion are all that remains of Trerice's former estate. The chapel has also long gone, marked by the field name of Chapel Close.

The Barn Kitchen and National Trust tea garden at Trerice allow visitors to enjoy the tranquility of this lovely property.

Days Out near Trerice

Places to Visit near Trerice