You are here:  Towns -> Places to Visit in Leicestershire -> Loughborough

Things to do in Loughborough, Leicestershire

Loughborough, with its unique atmosphere and wealth of historic buildings, is the principal town of the Borough of Charnwood, which is one of the largest Boroughs within Leicestershire.

Loughborough is famed for its University and Colleges; it is a busy commercial centre with modern industries such as pharmaceuticals and electrical engineering, contrasting with the older art of bell manufacturing.

The tradition of markets in Loughborough dates back to the early 13th century and the traditional open air markets of Thursday and Saturday still bring a bustle to the Market Square.

The Italianate style Town Hall, was originally built as the town's Corn Exchange in 1855. The oldest edifice in Market Square is the drinking fountain financed by Archdeacon Henry Fearon in 1870, when Loughborough gained its first piped water supply.

In 1997 the Market Square gained a controversial, but award winning contemporary sculpture by Shona Kinloch. 'The Sock' celebrates the woollen and hosiery industries, so vital in Loughborough's early industrial development. Probably the only monument to the hosiery industry in the world. Around the base of the sculpture are other appropriate local images,

such as bells, the canal and the University.

All Saints with Holy Trinity Church, is situated in a quiet and older part of the town. Parts of the building date back to the 13th century, but substantial additions were made in the following three centuries to create a large and exceptionally fine medieval wool church.

The headstones in the churchyard are made of local Swithland slate. On some you will notice practise lettering at the bottom of the slabs, probably crafted by apprentices, and originally intended to be hidden below ground.

The Old Rectory Museum is a small museum close to Loughborough Parish Church. The building is the restored part of a Rectory dating from the early 13th century. The exhibits relate to local interest and history.

John Taylor Bellfoundry Museum is a truly unique museum and visitor experience. The museum contains a record of bell founding from the earliest times. This is situated alongside the working factory, which still produces and restores bells for customers from all over the world. John Taylor bells are to be heard on every

continent. Visitors can see many of the production processes, on specially conducted works tours.

Great Central Railway takes you on an eight mile long trip by steam train along the route of the last main line to be built in England at the end of the Victorian era. The Great Central once linked the cities of South Yorkshire and the East Midlands to London. The restored railway boasts especially fine period stations at Quorn and Rothley.

The Carillon and War Memorial is situated in Queen's Park, just behind the busy Market Place and shopping area, the Carillon was built in 1922 as a War Memorial. It houses 47 bells, crafted by the local John Taylor Bellfoundry, and its tones can be heard during the regular Thursday and Sunday afternoon concerts in the summer months. Inside there is a wealth of exhibits and material relating to all branches of the Armed Services. There is considerable material relating to both World Wars and especially the local links with American forces stationed in Leicestershire during World War II.

in a building, which was originally a Victorian swimming pool, the Museum depicts the history of the Charnwood area. Special attention is afforded to the Charnwood Forest and its unique environmental development.

Loughborough University New Gallery is dedicated to the presentation of a wide ranging programme of new visual art and design including experimental and challenging work.

Bradgate Country Park is Leicestershire's largest and most popular Country Park, which includes both Bradgate Park and Swithland Wood.

Bradgate Park, extending to over 850 acres, was created from the Charnwood Forest over 700 years ago as a hunting and Deer Park. Herds of Red and Fallow Deer roam the park. The deer are descended from herds that came from Europe after the last Ice Age and the Fallow Deer are probably descendants of those introduced by the Romans and preserved by Norman kings.

Other features of the park include one of the County's best known landmarks, 'Old John Tower'. The stone crenellated tower was built around 1784 by the 5th Earl of Stamford, standing nearly 700 feet above sea level, it has fine views 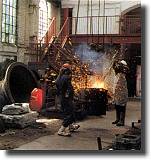 of the Soar Valley and parts of Leicester and the Charnwood Forest.

The ruins of Bradgate House lie in the centre of the park, the house was occupied by the Grey family for over 200 years and even today a muster of peacocks are kept there.

Visit the Bradgate Country Park Visitor Centre, with displays on Lady Jane Grey (Nine Days Queen of England), and the history of the park, its natural history and people.

Arts and Entertainment are well represented in Loughborough at the Charnwood Theatre in the Town Hall, which presents a full programme of amateur and professional performances.

Loughborough University stages a number of concerts and other arts events during the course of the year.

On the fringe of the Charnwood area is the Castle Donnington Race Circuit, venue of major international sporting events. Golfers have the choice of several courses in the area.

Walkers will find the Charnwood area superb, An abundance of signed footpaths allow access to the many varied forms of scenery ranging from the hilly outcrops and woodlands of the Charnwood Forest to the more gentle and tranquil features of the Soar and Wreake Valleys.

Days Out in Loughborough

Places to Visit near Loughborough