You are here:  Counties -> Things to do in Perth and Kinross 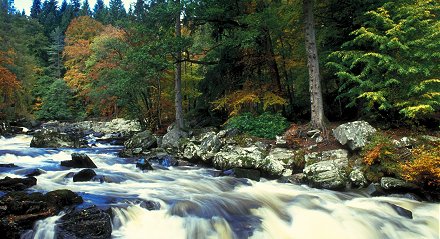 Perth and Kinross is situated at the heartland of Scotland. The Highland Boundary Fault Line runs through the area creating lowlands and highlands within the region. Perth and Kinross Tourist Information Centres have maps of the 'Perthshire Tourist Route', which will guide you through some of the region's most scenic and interesting countryside.

An outstanding feature of Kinross is Loch Leven. It's a popular place for trout fishing. Leven Castle stands on an island in the loch. Mary Queen of Scots was imprisoned here in 1567, but made a dramatic escape by boat. During summer months, boat trips are available to visit the island. RSPB Vane Farm Nature Reserve is on the shore. It's home to ducks, as well as pink-footed and greylag geese during the winter.

The Ochil Hills lie west of Kinross. There are lovely walks along their foothills at Crook of Devon and Rumbling Bridge. At the Ochil Hills Woodland Park there is a children's play area and picnic sites. The Ochil Hills encompass a range of hills, offering a reasonable challenge to walkers with the highest being around 2,363 feet.

Auchterarder lies to the north west. The Tourist Information Centre is in the High Street, which is over a mile long. It's the longest main street in Scotland, earning Auchterarder the name 'The Lang Toun' locally. The famous Gleneagles Golf Courses are nearby.

The historic city of Perth is an ideal centre for exploring the region, with excellent shops, galleries, museum and theatre. Local attractions include Scone Palace, the ancient crowing place of the kings of Scotland (pronounced 'Scoon Palace'). The 15th century Huntingtower Castle lies to the west of Perth, while garden lovers should make a point of visiting Branklyn Garden to see the Himalayan blue poppies.

Crieff is situated in the River Earn Valley, which is also known as Strathearn. Crieff has been a popular holiday resort since the advent of the railways. You can walk up Knock hill from where you will see expansive views around the town and valley. Crieff's Visitor Centre displays the history of the town. Glenturret Distillery is nearby and you can enjoy the 'Famous Grouse Experience' here. Drummond Castle Gardens lie to the south at Muthill. This is an elegant garden with many interesting features. To the west is Loch Earn. The pretty village of St Fillans lies at its eastern end, while the western end (in Stirling Region) has Lochearnhead and a water sports centre. Ben Vorlich is on the south side of the loch. It makes for a steep climb but rewards with spectacular views from the summit.

Dunkeld is a delightful Cathedral town on the banks of the River Tay. Its part-ruined Cathedral dates from the 9th century while the restored, 14th century choir has become the parish church. Lovely walks surround Dunkeld - call at Dunkeld's tourist information office for a guide. The Thomas Telford Bridge crosses the river and takes you to the Victorian village of Birnam. Beatrix Potter spent holidays here and was inspired by the area. The Birnam Institute houses the Beatrix Potter Exhibition and Garden. Loch Lowes lies between Dunkeld and Blairgowrie. This is a Scottish Wildlife Trust reserve with breeding ospreys, otters, red squirrels, birds and geese.

In east Perthshire the Strathmore district is famous for the superb quality of its soft fruit. Blairgowrie is to be found here and is often referred to as the Raspberry capital of the world. To the east, Megle Museum houses a large collection of Celtic Christian sculpted stones, these having been excavated from the local church yard. A few miles south of Blairgowrie, adjacent to the A93 road, is Meikleour Beech Hedge - officially the tallest in the world. It's over 100 feet high and is believed to have been planted in 1745.

You will find the town of Aberfeldy, North of Loch Tay and Glen Lyon. Aberfeldy Distillery was opened in 1898 by the Dewar family. You can tour the distillery and enjoy a walk along their nature trail if it takes your fancy. The Birks of Aberfeldy is a delightful walk near the town, complete with cascading waterfalls. The Bridge crossing the River was designed by William Adam and built by General George Wade in 1733-35. It was an important link in the network of roads he created to carry troops into the highlands. Nearby is the Black Watch Monument commemorating the formation of the regiment. This took place in Aberfeldy in 1739. Across the Wade Bridge is 16th century Castle Menzies. Ben Lawers is highest mountain in Perthshire and lies to the south west. Many Alpine flowers grow here. There's a nature trail and visitor centre at the foot of Ben Lawers. There's a reconstructed crannog at Loch Tay's Scottish Crannog Centre. The crannog is built on the loch and demonstrates early Iron Age life in the area.

Perth and Kinross's most northern Tourist Information centre is to be found in Pitlochry. This highland Perthshire town has been a popular holiday resort since the mid 1800s. It's well known for its Hydro Electric Visitor Centre and the famous Salmon Ladder. The salmon can be seen here from a viewing chamber as they make their ascent past Pitlochry Dam. Pitlochry Festival Theatre is noted for its productions of comedy and drama. South of the town, you can tour the Blair Atholl Distillery which is one of the oldest in Scotland.

Killiecrankie lies to the north. It's a spectacular wooded gorge with a visitor centre which tells the story of the famous battle of the Pass of Killiecrankie. This battle took place in 1689. Blair Castle is nearby. Each August, it plays host to International Horse Trials. Just north of Blair Athol are the woodland waterfalls at Falls of Bruar.

The 'Road to the Isles' is to be found in the west, running through spectacular, unspoiled countryside. This iconic route leads to Loch Tummel and Loch Rannoch. The Queen's View lies at the eastern end, high above Loch Tummel. It's the place that Queen Victoria famously stopped to admire the view westward along the loch with the Schiehallion in the distance. At 3,547 feet, Schiehallion is one of Scotland's most popular Munros. Another of General Wade's historic bridges lies at the western end of Loch Rannoch, while the pretty village Kinloch Rannoch lies at the eastern end. It enjoys fine views down the loch, with the mountains of Glencoe in the far distance.

Days out in Perth and Kinross


Places to Visit in Perth and Kinross