Established in 1947, The Edinburgh International Festival was created with the intention of enlivening and enriching the cultural life of Europe and providing "a platform for the flowering of the human spirit".

They also recognised that, if successful in its artistic aims, it would create a major source of tourism revenue for Edinburgh and Scotland.

60 years later the Edinburgh International Festival remains as artistically and financially successful as ever.

Long recognised as one of the most important cultural celebrations in the world, the Festival presents programmes of classical music, opera, theatre and dance of the highest possible standard, involving the best artists in the world.

Founders of the Festival include Rudolf Bing, then the General Manager of Glyndebourne Opera, Henry Harvey Wood the Head of the British Council in Scotland, and a group of civic leaders from the City of Edinburgh. 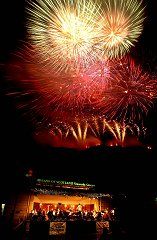 Over the years a number of other festivals have grown up around the Edinburgh International Festival. Most notably, the Edinburgh Festival Fringe, the Military Tattoo, and Book, Film, Jazz and Mela Festivals.

In July 1999 the Edinburgh International Festival opened its first permanent home, The Hub - Edinburgh's Festival Centre. The Hub, formerly The Highland Tolbooth, features Edinburgh's most prominent spire which towers over the Royal Mile.

This is an historic, listed building which has been enhanced by contemporary arts and crafts including light sculptures, tiling, stained glass and a stunning sculpture hall. The result is a building transformed into the buzzing heart of the Festival City and year round focal point for the city's cultural life.

You can find out more on the Edinburgh International Festival Website, or you can continue reading about other Edinburgh Festivals using the links at the bottom of the page.