The Edinburgh International Book Festival started in 1983 and is now the largest and most dynamic festival of its kind in the world.

It's a major part of the initiative to have Edinburgh designated as UNESCO's first World City of Literature, celebrating the city and country's rich literary heritage and dynamic present, not just for 17 days of August, but throughout the year. 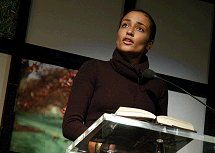 at young and old alike, the Edinburgh International Book Festival is a focus for those involved in literary creation and those who enjoy the fruits of their efforts.

There are events, book signings, discussions, forums and book sales to enjoy as well the opportunity to rub shoulders with the movers and shakers of the literary world.

In its first year the Book Festival played host to just 30 'Meet the Author' events.

Over the years there have been five directors of the Book Festival, all female - another unique festival record.

The Book Festival has now become a vibrant and important forum for social, ethical and political debate as well as encouraging and celebrating literary creativity of every sort.

The Edinburgh International Book Festival has an eviable reputation for introducing and nurturing genuine literary talent. In 1997, a young author listed as Joanne Rowling read from her first book Harry Potter and the Philosopher's Stone. The event took place in The Teepee - the smallest festival venue - in front of 30 spellbound children.

JK Rowling was back for the first time in 2004 with a sell out event in the main theatre, enchanting fans from all over the world. As a student, the young Ian Rankin covered the Book Festival's children's programme for his University newspaper.

Just some of the other authors invited to previous Book Festivals long before they became internationally famous are Salman Rushdie, Michael Ondaatje, and Kazuo Ishiguro.

Additionally, In the last four years, every Booker prize winner has been invited to the Book Festival long before being short-listed for the prize: Peter Carey, Yann Martel, DBC Pierre and Alan Hollinghurst. In 2001 V S Naipaul appeared at the Book Festival and was awarded the Nobel Prize for Literature immediately afterwards.

In 2002 Sir John Sulston appeared and was awarded the Nobel Prize for Medicine immediately afterwards. Other Nobel Prize-winners have included Seamus Heaney, Nadine Gordimer, Wole Soyinka and in 2004 Toni Morrison.

Ticket prices for Book Festival events have been the same for the last 5 years and there are over 30 free events for children as well as twice-daily free storytelling sessions. This must help maintain the Book Festival's massive popularity and attendence - the book signing sessions for best selling children's authors Jacqueline Wilson and Debi Gliori usually last up to 4½ hours!

It's not just books which are on offer though - 2003 was one of the hottest and sunniest festivals on record and over 1,574 litres of ice cream were sold - and eaten - on site.

For more information, please call +44 (0)131 718 5666 or you can go to the Edinburgh International Book Festival website. You can read about other Edinburgh festivals using the links at the bottom of the page.