You are here:  Attractions -> Things to Do in Central Scotland -> Riverside Museum 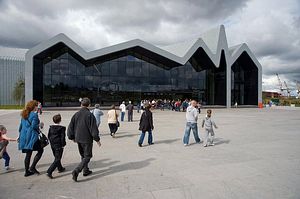 
Riverside Museum is a new evolution for the Glasgow Museum of Transport, previously located in Kelvin Hall, which closed in April 2010. This new riverside location for the museum is on the north bank of the River Clyde, near its confluence with the River Kelvin, in Pointhouse Quay, Glasgow Harbour.

Riverside Museum is now home to 3,000 items on show as against the 1,400 previously on show in the old museum. The museum's new home has enabled the designers to take the museum's collection forward into the 21st century for the enjoyment of everyone today and for future generations to come.

Visitors can see the first new exhibit at Riverside Museum before they even enter the building. 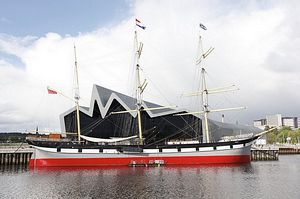 It is the 'Tall Ship' Glenlee, which is now permantly moored in front of the museum's powerful façade.

The historic Glenlee is one of 10 steel sailing vessels, which were 'Clyde built' by the shipping firm Archibald Sterling and Co Ltd. Glenlee is a three masted barque; she embarked to the water as a bulk cargo carrier in 1896 and circumnavigated the globe four times. Today she is one of just five remaining of the original group still afloat.

Today the 'Tall Ship' holds maritime events and activities, talks and workshops for school pupils, also guided tours, with an audio guide, which is a fun way to learn about the ship's history. There is 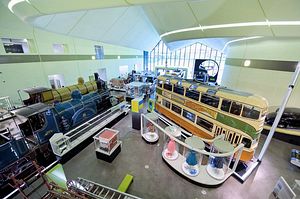 a mini cinema and a play area for the under 5's in the cargo hold; there is also a gift shop and a coffee shop on board. There is an admission charge if you want to go aboard the ship.

As befits this new purpose-built museum, Riverside Museum's interior reflects its exterior; continuing the theme of the waves on the River Clyde. The museum is on two floors, with stairs and lifts for ease of access for disabled visitors.

The interior is innovatively designed making good use of its walls and the overhead height, with fresh new imaginative ideas to display the collections to best advantage. The huge windows allow natural light to flood in whilst at the same time providing visitors with great views over the River Clyde. Colourful lighting has been cleverly incorporated and enhances several of the displays.

There are plenty of exhibits, such as the colourful 'Paint your Wagon' (a camper van) a horse drawn tram; an old police car and an 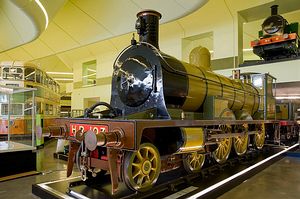 old fire engine - all forms of transport connected to Glasgow. There are also Glasgow trams, busses and trains, some of which can be boarded to view the interiors.

Here you can see one of the biggest locomotives built in Glasgow, which was originally exported to South Africa and has now been gifted to Riverside Museum.

Another exciting and unexpected sight is the front of a railway steam engine protruding from the first floor over the floor below!

But who would expect to see a wall of cars on platforms and a further wall of motorcycles? Both of these exhibits are wall mounted with light-up platforms displaying the cars and motorcycles.

A fun display you can't miss is the suspended 'velodrome' overhanging the central part of the museum; attached to this is a selection of the museum's collection of bicycles.

Although Glasgow has been a leading manufacturer of many forms of transport throughout the years, it is probably fair to say it is most widely recognised as 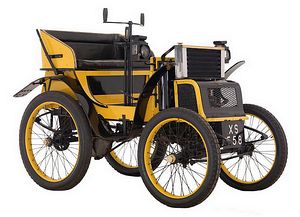 one of the major ship building capitals of the world. Today Riverside Museum presents a new display of model ships built on the Clyde; some of which can be viewed on a conveyor, which moves the models around, with each of their details alongside.

Riverside Museum offers lots of interactive touch screens and storyboard displays throughout. The museum is interested in learning about your thoughts on the displays and layout of the museum and have incorporated several visitor feedback stations, where you can communicate your thoughts either by using the available touch screens or by filling out one of the forms provided.

One of the original museum's popular displays was a section entitled 'Kelvin Street'. Visitors will be pleased to know that this has been retained and indeed expanded upon and now comprises three streets:

In 2004 award winning Zaha Hadid Architects were appointed as designers for this purpose-built museum, 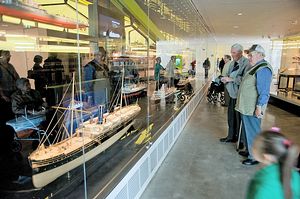 an outstanding modern building for the regeneration area of Glasgow Harbour. It has been said that the architecture represents the waves on the River Clyde.

£74 million was required for the development of the museum. Of this, Glasgow City Council and the Heritage Lottery Fund provided £69 million; a charitable trust was created to raise the remaining £5 million through company donations and many major patrons. Work on the museum began in 2007 and the Riverside Museum opened to the public in June 2011.

The former Glasgow Museum of Transport in Kelvingrove was a favourite outing for many families. Now, people who visited the old museum as children, with their parents or grandparents, will be able to enjoy the new museum with their own children and even grandchildren in years to come.

Although the museum is not the same as what went before, visitors will be pleased to discover that it has moved on, taking with it much of the original collection, while adding many new interesting exhibits. 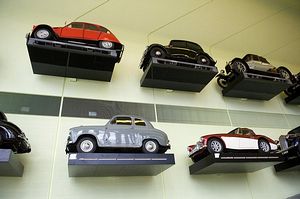 Days Out near Riverside Museum

Places to Visit near Riverside Museum