You are here:  Attractions -> Things to Do in Somerset -> Montacute House 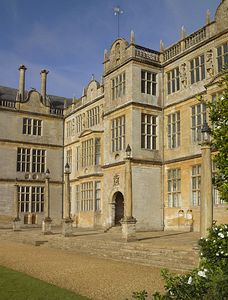 Montacute House is more than just another great stately home in the National Trust collection. It has some great unique features and human-interest stories in its long history which deserve to be shared.

Written off as unsalvageable, Montacute House was one the National Trust's first acquisitions back in 1931. It is now said to be one of the finest Elizabethan stately homes in England, built in 1598 of local Ham stone, quarried locally near Yeovil.

It was commissioned in 1598 by Sir Edward Phelips who served Queen Elizabeth I. The Phelipses continuously occupied the huge house until 1915 when the fortune ran out and the upkeep of Montacute House became prohibitive. It was then let to various tenants and finally 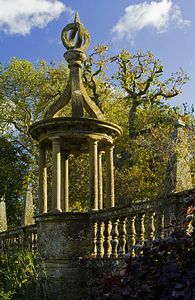 was bought by Ernest Cook, a philanthropist who generously donated Montacute House to the Society for the Protection of Ancient Buildings. It later found its way into the hands of the National Trust.

As was fashionable in the 17th century, the great hall, kitchens and pantries originally occupied the ground floor with family rooms and salons on the first floor. The beautiful panelled library, drawing rooms and bedrooms can be seen on this level. The second floor was a given over to the Long Gallery. Apparently the Phelips children would bring their ponies indoors during wet weather and race them up and down the gallery!

The Long Gallery is the longest of its type to be found in England, stretching for 172 feet (52m). It makes the perfect setting for the collection of historic portraits which are on loan from the National Portrait Gallery. See how many faces and events you can recognize as you stroll the long line-up!

In such a huge mansion one would expect large bathrooms, but possibly the most compact bathroom ever is located in a cupboard off the main bedroom. It was the brainchild of Lord Curzon, who leased Montacute House from 1915 to 1925. 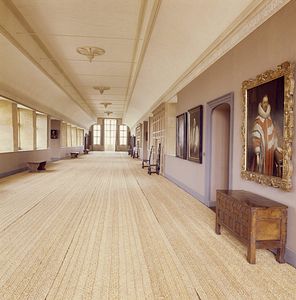 the Crimson Bedroom which is deeply carved with agapanthus leaves and James I's coat of arms. The bed dates back to 1612.

One light-humoured story is that the bed was used in the filming of Johnny Depp's film "The Libertine". To ensure the bed was not being damaged, a staff member of the National Trust lay beneath the bed during filming to ensure it was standing up to the strain! You may recognize the setting of Montacute House in other period dramas, including the film "Sense and Sensibility" based on Jane Austen's classic.

Another heart-touching tale of Montacute House surrounds the wonderful collection of samplers dating back over 400 years. Surprisingly, the enthusiastic collector was not a woman but a man, Dr Douglas Goodhart. Apparently his hobby was not appreciated by his wife and children who would shout "Drive on" whenever they approached a likely antique shop!

The extensive Renaissance gardens were laid out in the 1840s and the pond was added some years later. The original terracing and the corner pavilions with their "ogee" shaped roofs are the original Elizabethan designs, as is the lengthy terrace.

Much of the design comprises of clipped yew hedges and sunken lawns, bordered with showy beds of colourful flowers, beautifully planted out with the help of Vita Sackville-West.

Days Out near Montacute House

Places to Visit near Montacute House