You are here:  Counties -> Things to do in Isle of Man

The Isle of Man lies in the Irish Sea, almost equidistant from Ireland and the

The Isle of Man has an ancient history and tradition - it is independent of Britain with its own government, currency, stamps and language. The Island is however a crown dependency, with a lieutenant-governor appointed by the British monarch and English is spoken everywhere.

The Isle of Man has a diverse landscape with mountains, cliffs, valleys and sandy beaches. There are wildlife parks and nature reserves, a huge range of varying attractions, events and excellent facilities.

On the Isle of Man there are archaeological sites from as early as 7,500BC. There is a 95-mile coastal footpath, also the 28-mile Millennium Way. The Island boasts no less than eight golf courses.

The intriguing symbol of the 'Three Legs of Man' - or triskelion - which appear on the Island's flag are The Armorial Bearings of the Isle of Man. On a red background the three human legs bent at the knee, are conjoined at the upper thigh, the legs are armoured and spurred.

The symbol appears on the Isle of Man's Sword of State and on Manx banknotes surrounded by the Island's motto, "Quocunque Jeceris Stabit" which means, "Wherever you will throw it, it stands". The triskelion is an ancient symbol, which has been found in many parts of the world, it is thought that the Manx triskelion may have been brought here from Sicily, but its age and origin are debatable.

The Isle of Man TT

Today the Isle of Man is best known as the Road Racing Capital of the World, the home of TT (Tourist Trophy) motorcycle racing. Established in 1907, this annual event takes place over a 37-mile course of closed roads in the first two weeks in June.

This is the most famous of the racing events held on the Island, with entertainment, club meetings and activities. Other motor sports such as rallying, moto-cross and karting take place on the Island from April to September.

Other attractions unique to the Island are the 'Glens of the Isle of Man'. There are seventeen National Glens and many more non-national glens, all of which are places of piece and tranquillity. The coastal glens lead to sandy beaches, while the mountain glens have rivers, streams, and waterfalls.

Most have splendid woodland and lovely wildflowers - particularly so in spring. Some contain more difficult walking terrain than others, so it is best to seek advice before exploring.

The Isle of Man is home to the 'Manx Cat', which originated on the Island. Many mythical tales exist about their origin, but today it is thought that due to their isolation on the island, inbreeding caused a spontaneous mutation of genes hundreds of years ago.

Another theory is that the cats were introduced to the Island in 1588, from the wreck of one of the ships of the Spanish Armada. The cats come in many colours and have a distinctive shape - they are robust and have a rounded head and cheeks, the back is short with noticeably longer back legs than front and although the true breed are tailless some do have short stubby tails.

Visits to the Isle of Man usually begin at the Sea Terminal Building in Douglas - the capital of the Island. Situated on the east coast, Douglas has been a holiday destination since Victorian times, as evidenced by several of the fine buildings along the sea front promenade.

Douglas is a busy, thriving town with a historic quay side, a modern shopping centre in Strand Street, restaurants and cafes. There's a leisure complex, cinema and the splendid Edwardian, Gaiety Theatre. Horse drawn trams traverse the entire sea front. They are now the only ones in existence.

Attractions in Douglas include Isle of Man Transport. The Manx Museum is the Islands Treasure House, and tells the story of the Isle of Man.

Other key attractions include Villa Marina Gardens, The Regimental Museum - featuring the history of the 15th Isle of Man Light AA Regiment, Tower of Refuge and the TT Grandstand.

From Douglas take a trip on the Manx Electric Railway and enjoy the villages and scenery along the way. You have the opportunity to stop off at Laxey to meet 'Lady Isabella' then continue on your way to Ramsey.

North of Douglas is the attractive village of Laxey, whose harbour was once a thriving fishing village. Today it is a traditional holiday resort. Laxey was also known as a mining village and today visitors come to see the huge pump wheel, called Lady Isabella after Lieutenant Governor Hope's wife.

The iconic Laxey Wheel is the largest working waterwheel in the world, with a diameter of 72ft and circumference of 227ft. Laxey is the starting point for the mountain railway, taking you to the summit of the Island's highest mountain Snaefell 2,036ft.

Ramsey is the island's second largest town. The town was once renowned for ship building, Ramsey Shipyard built the first oil tanker called 'The Jane'. The shipyard also built The 'Euterpe' later named 'The Star of India', which is now a museum ship in the port of San Diego.

Ramsey's iron pier dates from 1885, but is now sadly being eroded by weather and the sea . The Island's longest River, the Sulby, enters the sea at Ramsey's tidal harbour, which is busy with yachts and fishing boats. Here the Manx Sailing and Yachting Club have headquarters and organise the Round the Island races.

You can cross the harbour by the old swing bridge. This leads, via the promenade on the north shore, to Mooragh Park with its sub-tropical plants, large lake for sailing and rowing boats and activities for children.

Grove House and Gardens is an interesting Victorian farmhouse, with original furnishings and a complex of outbuildings and farm vehicles. Albert Tower stands on a hill overlooking Ramsey. This landmark was built to commemorate a visit to the town by Queen Victoria and Prince Albert.

Castletown is on the South of the island. It was the capital until 1870 when the parliament was moved to Douglas. The medieval fortress Castle Rushen has served as many things over the years, including the administrative centre and law courts.

Today historical furnishings, costumed figures and recreated displays bring the castle to life. Nearby is Rushen Abbey the most important religious site on the Isle of Man. Manx Aviation and Military Museum is to be found near Castletown Airport, while the Nautical Museum is at Castletown Harbour. It presents the nautical history of the Island.

Port St. Mary, to the south, is the island's main sailing and water sport centre. With both inner and outer harbours, a beach and the clear blue waters of Chapel Bay it is a favourite place for sea lovers.

The village of Cregneash is a living museum where visitors can see traditional farming methods and skills in action. Village life continues as it has for hundreds of years - farms are maintained by horse power and many animals have the chance to roam free. Among these are the Manx Loghtan Sheep. These are a rare breed of four horned animals unique to the island. 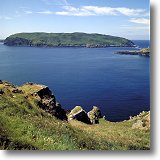 At the southern tip of the island is the tiny islet Calf of Man, separated by the often turbulent strait of water known as the Calf Sound. The islet is a bird sanctuary, which you can visit by boat from Port St. Mary or Port Erin. You may well see Grey Seals from the boat, sunning themselves on the rocks.

Port Erin, on the south west coast, is a popular family destination with an almost circular bay and fine wide sandy beach. There are cliff walks above the town on Bradda Head with its landmark Milner's Tower.

These enjoy fine views to the Calf of Man and in clear weather the Mountains of Mourne in Ireland. The town has a busy Arts Centre with a varied programme. The Railway Museum next to Port Erin Railway Station is well worth a visit.

Travel to the west coast and visit the tiny city of Peel. This is a place of great Antiquity. The unique atmosphere of Peel marks it out as the most 'Manx' of all the Island's towns - the narrow streets and shops are full of character.

Make sure you're in Peel in the evening - it's often referred to as Sunset City due to the spectacular views at sun-down, when the setting sun casts a crimson glow over the sea. Peel has the finest sandy beach on the island, along with restaurants and cafes and even locally made ice-cream.

Peel was the main fishing port of the island and even today fishing plays a significant part in the town's economy. The harbour side has several smoke houses, where herring are smoked over smouldering oak chips, turning the fish into kippers. Manx kippers are a speciality of the Isle of Man.

On Tuesdays a market is held in the market place above the harbour. A walk from here will take you to St. Patrick's Isle which is joined to the town by a causeway. It is thought St Patrick came ashore here in the 5th century bringing Christianity to the Manx community. Here you will find the ruins of the 13th century cathedral and round tower.

Peel Castle was built by the Lords of Man in the 14th century. The remains of a 7th/8th century monastery lie inside the castle ruins. Peel's main attraction is the House of Manannan - a fine heritage centre which interprets the Islands Story with audio-visual displays and walk-through presentations.

Days out in Isle of Man


Places to Visit in Isle of Man