You are here:  Attractions -> Things to Do in Isle of Man -> The Island's Treasure House 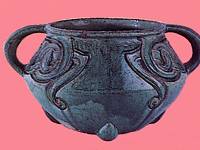 The Story of Mann

The Story of Mann is the main public presentation of the work of Manx National Heritage. It is a unique portrayal by Manx National Heritage of cultural and heritage assets across 227 square miles of historic and scenic landscape. The Story of Mann concept preserves, presents and promotes a combination of historic properties, ancient monuments, natural landscapes and formal museums, by emphasising the inter-linked nature of these assets in the historic story of the Island's development.

The award-winning Story of Mann is introduced here, at 'the Island's Treasure House' (Thie Tashtee Vannin), where a dramatic audio-visual presentation invites you to discover 10,000 years of unique Manx heritage presented throughout one of the richest historic landscapes in

Europe. Impressive museum galleries lead visitors from Fine Art to Finance, and a Special Exhibition from the Museum's busy events programme. You can then pursue a specific interest in the helpful National Library & Archives, or simply relax and enjoy the fare of the popular Bay Room Restaurant.

The National Art Gallery is followed by brimming displays of Geology and Archaeology, while the extensive Social History Galleries include Manx Culture, Traditional Industries, Wartime Internment, and the world famous T.T. Races with the late, great Joey Dunlop among the many exciting audio-visual presentations.

Cregneash is the living, working illustration of 19th century Manx crofting life. Visitors can see traditional farming methods and skills in action, including the fields being worked with horse-drawn equipment, the processing of Manx loghtan wool, and

woodturning in the Turner's Shed. The lifestyle of the Cregneash community would never have been easy, and compares starkly with that in evidence at The Grove House and Garden.

Situated at the heart of our ancient capital, Castletown, this impressive limestone fortress was the seat of the former Kings and Lords of Mann, the castle's oldest part dating to the time of Magnus, last King of Mann, who died here in 1265. Later, the Castle served as an administrative centre, a mint, a law court and, for over 100 years until the late 19th century, as a prison. Today, spectacular recreated displays, include splendid costumed figures and historical furnishings, bring to life the castle's medieval and 17th century periods.

Rushen Abbey is the most substantial and important medieval religious site in the Isle of Man. Sitting by the Silverdale Burn in what is now Ballasalla, the Abbey lies less than two miles from Castle Rushen, the main seat of political power during this period. Acquired by the Manx Government in 1998 it

was transferred to Manx National Heritage and forms a major presentation which examines not only the important story of this site but also the Christian heritage of the Island. Parts of the Abbey buildings still survive and over several years will be enhanced through expert consolidation as more of the archaeological remains are exposed through excavation and brought to public view.

Built around 1200AD as the first town church, St Mary's Chapel changed its role from 1570 to become the Grammar School (closed 1930). Rows of bench desks with ink wells are reminders of early Victorian school days.

Originally home to the Gibb family, The Grove House and Garden illustrates the more priveleged lifestyle to be found on a rich lowland farm. The period rooms in this modest sized Victorian villa display sumptuous original furnishings, costumes and a wealth of accumulated possessions, while the complex of outbuildings shows the early farm vehicles and equipment that would have been used.

The Great Laxey Wheel was built in 1854

to pump water from the Laxey mines, it is now the largest surviving water wheel of its kind in the world. Known as 'Lady Isballa', a climb to the top of the Wheel is rewarded with breathtaking views across the valley, while the 'Mines Trail' displays the remains of a once thriving industrial complex and offers a pleasant walk through the now peaceful Glen Mooar.

The Castle is situated on St Patrick's Isle.
Through your personal guide, the voice of Manannan explains the great stories in the stone structures which still stand within this ancient island fort. Secrets, politics and strange events are all revealed, and the brooding slate and sandstone walls offer unequalled views along the coast, and across Peel town and harbour.

The House of Manannan

Audio-visual presentations and walk-through displays present vivid illustrations from the age when fishing and trade were the life blood of the Island. Explore the busy quayside of 19th century Peel town, see the famous Manx kipper in production and listen to the people whose fascinating stories describe the rich maritime heritage of Mann.