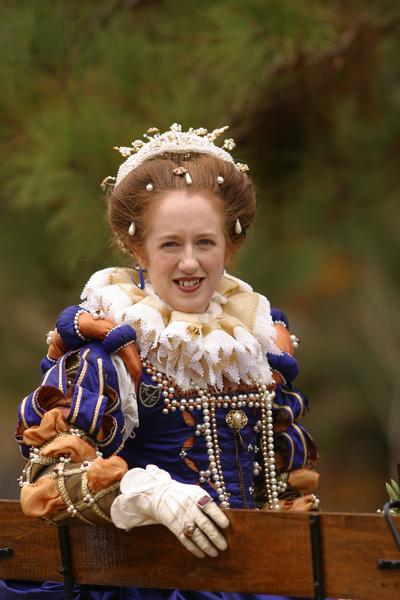 Actress Dressed as Queen Elizabeth I

From the reign of Henry VIII to the middle of the reign of Elizabeth I, fashion styles for the aristocracy didn't change very much.

The Elizabethan clothing worn at Elizabeth's court at Eltham Palace would still have been recognized by Henry and his advisors.

Tudor clothes had head coverings which were sturdy, skirts which were bell-shaped, and over-sized jewelled coats for the men.

Fashions were still made from heavy brocades, cloth-of-gold, and other expensive material. Jewellry and the use of symbolism was still very much in vogue.

The sumptuary tax on articles of clothing was still on the books. Anywhere from the colour of the cloth to the ornateness of the decoration could be taxed.

No one class was prohibited from wearing cloth-of-gold, for instance. However, if it was worn, it was a symbol that the person was wealthy and they could afford to pay the fee.

By the late 1500's, courtiers at Hatfield or Kenilworth Castle were at the forefront of fashion.

Elizabethan clothing had become extremely important in showing a person's status at court. Hats typified this status. The taller the hat, the more important the person underneath it.

Rich material was often a gift (or a bribe), while jewelled sleeves, gloves, or ruffs were often presented to highly placed courtiers as reminders of the sender.

There were complaints of outrageousness concerning what clothes had become; the decadence of style and form. But although grumbles were heard, everybody followed the lead of Elizabeth I.

Elizabethan Fashion at Court: The Ladies

Women's fashions ruled the day during the last Tudor's reign. With a female monarch on the throne, it wasn't surprising that the emphasis was on the female form.

The shape of a woman took a radical turn in 1590 when the drum farthingale became the standard of fashion. This shape was produced by strapping a large platter-like contraption around the waist, and then allowing the material of the gown to flow over the drum.

Full head coverings were quickly discarded. The French hood gave way to small caps, hats, and cauls. Some women just put flowers in their hair while others scandalized the court by wearing men's hats over their caps. 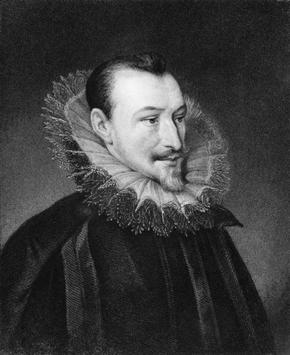 Tudor fashion offered long, flowing sleeves. By the time of Elizabeth, sleeves (which were separate garments and had to be pinned on) could be found in two styles; either closely fitted from shoulder to wrist, or greatly padded and often ending in a tight wrist decorated with a small ruff or cuff of lace.

Not to be outdone by the ladies, Elizabethan clothes for men emphasized their lower bodies. Long gowns were no longer in favour. Legs were covered in hose, and meant to be admired. A garter placed just below the knee drew the eye to the shape of calf muscles.

Ruffs could become large. At court, some were quite elaborate as they would be decorated with jewels, or flowers. Although usually worn around the neck, ruffs could also make their appearance around a person's wrist.

Jewellry was never out of fashion. It was worn not only on ears, wrists, and fingers, but Elizabethan clothing would be covered with pearls (Elizabeth I's favourite ornament), emeralds, rubies, and other precious stones. Jewels would be moved from one garment to another.

Slip-on shoes were worn by women, most often with a very low heel. With the long-sweeping skirt, the shoe was usually never seen. Shoes for men were also slipper-type, although boots were also worn.

Elizabethan Fashion Away From Court

As with clothes during the early Tudor times, people in the countryside dressed in the same style as those who were members of the court. The only difference was in the quality of the material and the trimmings.

Brocades, satins, and cloth-of-gold would have been beyond the means of the lower classes. Wool and home-spun linen were the materials used.

Although not made of precious jewels, decoration was commonplace. Carved wood or bone was always available for ornaments.

For those a bit further up the economic scale, pewter or imitation pearls were used to make decorations.

Caul: A hair net. At court, these could be quite elaborate, often studded with jewels. The lower class also wore these 'hair nets'. For them, this accessory was known as a muffin cap.

Cloth of gold: Gold metal thread which was woven onto pieces of material. Cloth of silver was also made.

Doublet: Short jacket worn by men. It would be tight fitting to show a trim waistline.

Pin money: This comes from women having to have money to purchase the pins which attached the sleeves to their garment. Sleeves were separate items and were attached to the bodice.

Pair of bodies: another name for corset. Both sexes wore corsets.

Partlets: It was a maiden's privilege to show a bit of breast. If she wished to be modest, a partlet would be placed between the neck of her gown and her ruff. Elizabeth I, being a maiden, usually did not wear a partlet.

Pattens: A sandal-like wooden sole strapped to a shoe to protect them from mud and dirt.

Ruff: A ruffle around the neck, or wrist, which came in several sizes.