You are here:  Attractions -> Things to Do in South Wales -> Caerphilly Castle 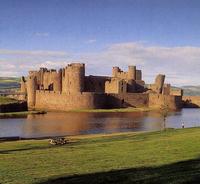 It sprawls over a huge area (30 acres in all) making it the biggest in Wales and, along with Windsor and Dover, the largest in Britain.

Caerphilly Castle was built by the Anglo-Norman lord Gilbert de Clare, in the late 13th century , to consolidate his grip on the lands he had captured.

The Fortress impressed onlookers right from the start, an awstruck 14th century Welsh poet describing it as "giant Caerfilli".

De Clare's castle, a high point in medieval military architecture, is an excellent example of the concentric walls within walls defence system.

Water as well as stone played a crucial role here. The castle's water defences are much more extensive than a mere moat. Lakes were created together with three artificial islands, making the castle almost impregnable to siege warfare.

If attackers did manage to reach the walls they would have been faced with a formidable series of fortifications protecting the castle's inner core.

The gatehouse is particularly noteworthy, as are the great hall, and full-sized working replicas of medieval siege engines.

Only its leaning tower (which out-leans even Pisa's world famous example) betrays any sign of weakness in this formidable structure.

Days Out near Caerphilly Castle

Places to Visit near Caerphilly Castle