You are here:  Towns -> Places to Visit in Central Scotland -> Glasgow

Things to do in Glasgow, Central Scotland 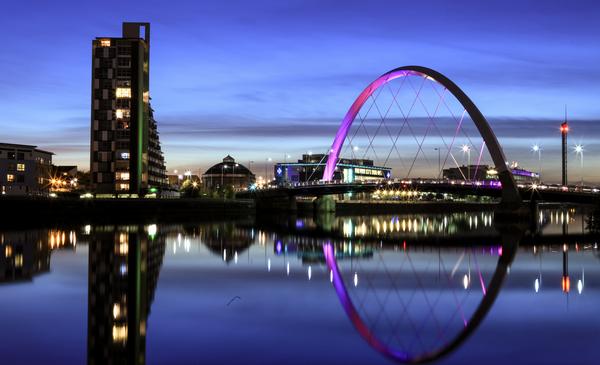 Glasgow is Scotland's second and largest city, situated on the banks of the River Clyde; it is the gateway to the Trossachs, the beautiful West Coast and the Highlands of Scotland. Glasgow is a busy, friendly, vibrant city with fine architecture, superb shopping facilities and a wide cultural interest.

St. Kentigern, known as St. Mungo built a church in the area in 543AD as settlers came to join the Christian missionary, Glasgow began to develop. In the 12th century a cathedral was built on the site of the saint's burial place. The town grew in importance and in 1451 became the home of the Second University in Scotland. 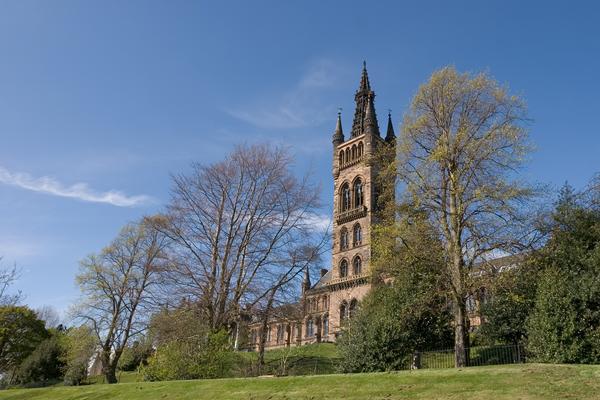 In the 17th century Glasgow became prosperous through trading with North America, in tobacco, sugar and cotton. The fast clipper ships of the Glasgow merchants sailed between Glasgow and Virginia, bringing goods from the new world into the new Port Glasgow, up the River Clyde which had been widened and deepened, into the city of Glasgow.

During the Industrial Revolution, Glasgow became renowned for its heavy industry and shipbuilding. By the 19th century, the majority of British Steam ships were being built on Clydeside, this continued until a decline in heavy industry in the 20th century. The great wealth of the area can be seen today in its fine buildings, several were the gifts of rich ship builders and industrialists of the city. 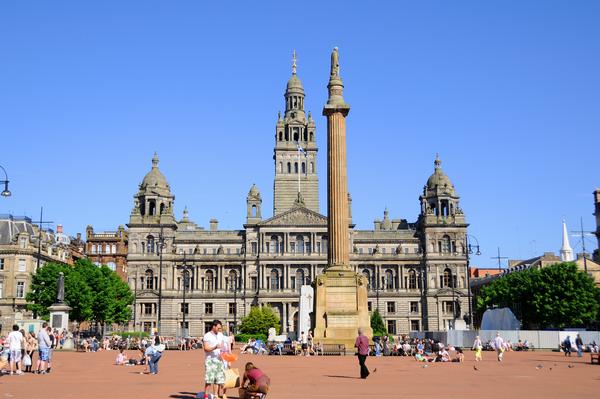 Since the decline of shipbuilding and much of its heavy industry, Glasgow has turned its attention to becoming a "European City of Culture", and attracting tourists from around the world. 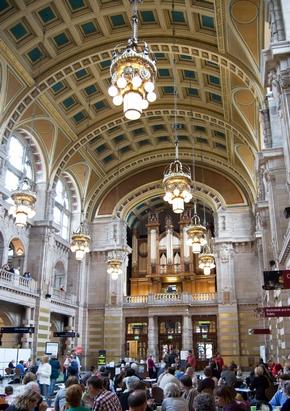 Major work has been done, and Glasgow's once grey image has been transformed. The buildings in the city centre have been cleaned, revealing the original golden sandstone; shopping arcades have been built and a wider range of cultural entertainment offered.

Old disused warehouses on the riverbanks, and redundant dockyards have been demolished, making way for a new residential area, with parks and gardens.

Glasgow is the birthplace of the world famous architect and designer, Charles Rennie Mackintosh (1868 - 1928). Mackintosh did much with his innovative style to promote European Art Nouveau.

His work can be seen in Glasgow today at The Lighthouse, Scotland's Centre for Architecture, Design and the City, which features a Mackintosh Interpretation Centre. Mackintosh's best-known work is The Glasgow School of Art, which is open to the public.

Mackintosh House at the Hunterian Art Gallery, and Queen's Cross Church are both worth a visit.

At The Willow Tea Rooms in Suchiehall Street, you can enjoy tea in the original Room De-Luxe and the recreation of the Gallery TeaRooms in their original settings, created by Charles Rennie Mackintosh. 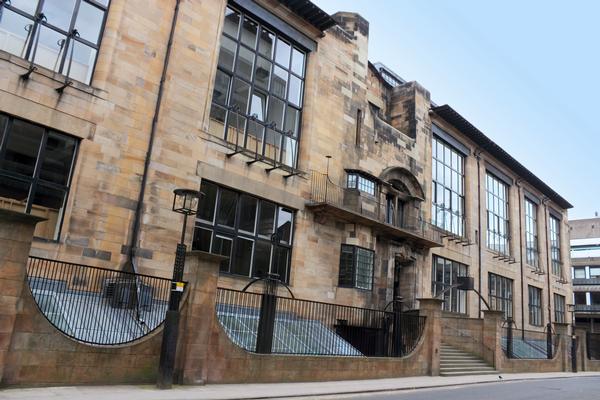 Central Glasgow has many other fine buildings with a diversity of architectural styles, Glasgow Cathedral is one of Scotland's finest Gothic buildings, dating from the 12th and 13th centuries. Situated adjacent to the Cathedral, is Glasgow Necropolis, the design was taken from the Pere la Chaise cemetery in Paris. The Necropolis contains many beautifully designed tombs.

The City Chambers is a splendid example of 19th century architecture, well worth visiting to see the magnificent staircase and banqueting hall. 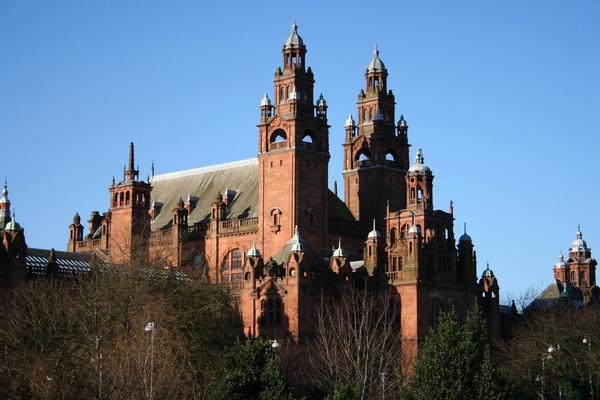 A visit to Glasgow would be incomplete without seeing the award winning Burrell Collection, housed in Pollock Country Park. Sir William and Lady Burrell bequeathed their fabulous collection of antiques, artefacts and paintings, to Glasgow City in 1944.

The brilliant design for the gallery was the combined work of Brit Andreson, Barr Gason and John Meunier, incorporating antiquarian pieces from the collection, such as archways, stained glass and doorways into the modern building.

Over 8,000 object-de-art are gathered together, dating from the Neolithic period to the early 20th century. 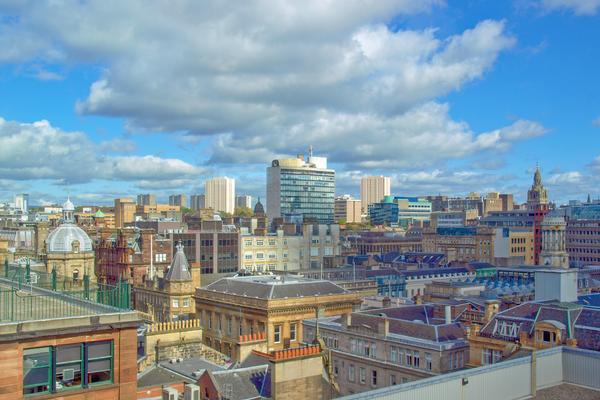 The Rooftops of Glasgow

Situated in Pollock Park and in complete contrast to the Burrell Collection gallery, is Pollock House, the ancestral home of the Maxwell family. Designed by William Blake in 1752, the house contains many fine antiques and some important works of William Blake, together with an impressive collection of Spanish art including works by El Greco, Goya and Murillo.

Glasgow is a centre for cultural entertainment, being the home of Scottish Ballet and Opera, the Royal Scottish National Orchestra, BBC Symphony Orchestra and National Youth Orchestra of Scotland. Glasgow offers a wide choice of Theatres and Cinemas and hosts festivals from Jazz to Celtic events. 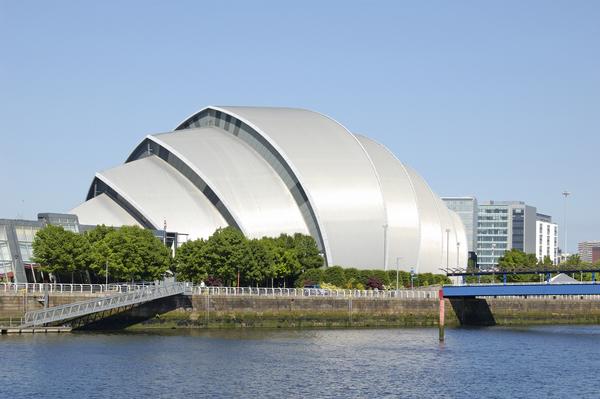 The sports enthusiasts will want to visit Hampden, Scotland's National Stadium, and Kelvin Hall International Sports Arena. The impressive Scottish Football Museum is located at Hampden. Glasgow also offers a variety of leisure clubs and sports facilities for those more keen to participate in sports and activities.

Eating out in Glasgow is a gastronomic dream; the city offers restaurants, cafes, bistros and tea-rooms specialising in everything from traditional Scottish food to international cuisine. 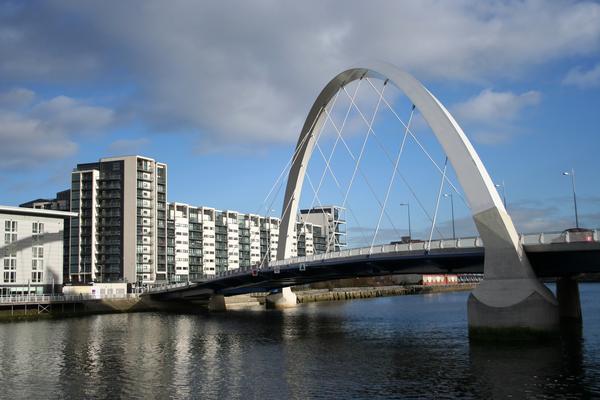 Glasgow's name derives from the Gaelic and means "The Dear Green Place". A name which Glasgow lives up to, with its many parks and gardens. You will find city centre parks with facilities for tennis and bowling, the beautiful Botanic Gardens, and others which offer the visitor the chance to simply sit and relax or stroll through, admiring sculptures, trees and beautiful flower borders.

Check out our other articles on Glasgow

Romantic Things to do in Glasgow

14 Best Free Things to do in Glasgow

Glasgow International Airport is located just eight miles from the City centre. It is one of the UK's leading gateway airports with an extensive range of scheduled and chartered services from North America, Continental Europe and the rest of the UK.


Things to do in Central Scotland

Days Out in Glasgow

Places to Visit near Glasgow