You are here:  Towns -> Places to Visit in Central Scotland -> Port Glasgow

Things to do in Port Glasgow, Central Scotland 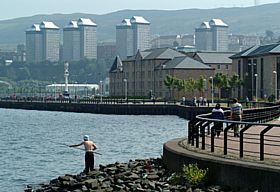 Port Glasgow is one of the largest towns in the Inverclyde area. It is situated on the south bank of the River Clyde, east of Greenock. Port Glasgow was originally called "Newark" which derived from the "new work" on the castle.

Newark Castle was built in 1478 by the Maxwell clan, where the River Clyde widens and becomes the Firth of Clyde. It was initially a Tower house with a walled enclosure and a gatehouse.

The castle passed down through the generations to Sir Patrick Maxwell who was a powerful friend of James VI of Scotland. He expanded the castle in 1597 and built a Renaissance Mansion in Scottish Baronial style with corbelled turrets.

The Maxwell line of inheritance died out in 1694 and after a series of owners, the castle was handed over to Historic Scotland in 1909. The gatehouse and mansion overlooking the shore make an interesting visit, although the defensive walls have mostly disappeared.

The harbour was built nearby in 1667 and was used to unload cargo from seagoing ships and transport it to Glasgow in smaller boats. At this time the town was renamed Port Glasgow.

Eventually the River Clyde was dredged and ships were able to sail up to Glasgow. The port then turned to shipbuilding and until the 1980s there were many famous shipyards around the castle.

In 1812 the first commercial steam vessel in Europe, the Comet, was built at Port Glasgow by Henry Bell. Altogether, the port was responsible for 25% of the total tonnage of ships that were "Clyde built", including RMS Queen Mary in 1934, RMS Queen Elizabeth in 1938 and the QE2 in 1967.

Population figures in 2010 showed 15,543 people lived in the town, but numbers have declined since 1991 (19,436), when shipbuilding still provided employment. Today only Ferguson Shipbuilders remains.

The grid pattern for the streets was laid out in 1693. The most historic buildings are in the centre of Port Glasgow, where the town first began before expanding inland up the steep hills to the residential areas of Upper Port Glasgow.

Since 2007 Port Glasgow has been an area of regeneration with investment in new housing, a bypass and a new civic square.

Port Glasgow has two railways stations: Port Glasgow station in the town centre and Woodhall station to the east.

Things to do in Port Glasgow

Visit the Castle and see the collection of local prints of Port Glasgow. The parkland around Newark Castle is managed by the National Trust for Scotland and is known as Parklea. It has many sports fields that are leased to the local authority.

The Clyde Muirshell Regional Park provides green spaces and historic sights where visitors and residents can enjoy recreational activities. Coronation Park is a pleasant place to walk with beautiful waterfront views and a Victorian drinking fountain.

Visit the oldest building (excluding the castle) in Port Glasgow. The address is 9-11½ King Street! It was formerly the Town Hall, a school and was where John Wesley preached. It is now a Category B listed building and is used as a social club.

The city of Glasgow is 20 miles away and offers excellent shopping and fine architecture by Charles Rennie Mackintosh.

Days Out in Port Glasgow

Places to Visit near Port Glasgow