You are here:  Towns -> Places to Visit in Cornwall -> Duloe

Things to do in Duloe, Cornwall 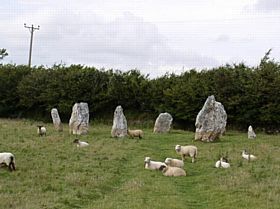 Duloe is a small village about halfway between Liskeard and Looe. Perhaps its most interesting feature is in a field just across the road from the parish church of St. Cuby, a 5th century Cornish saint.

In the field and about a couple of hundred yards from the church is a Bronze Age stone circle dating from around 2000BC. By Stonehenge standards it is very small at just under 40ft diameter. It consists of seven upright stones plus one lying on its side. The largest of the remaining stones is approx 8ft tall.

The Duloe stone circle was not officially "discovered" until 1801, probably because a field hedgerow had been built through the circle which made it difficult to see the stones as part of a complete circle. In 1861 the Rev Bewes had the hedge removed and all the toppled stones were replaced upright but unfortunately the largest broke in half and remains on its side.

Also unfortunate was that an earthenware jar containing bones was found beneath this stone but these crumbled to dust when a worker accidentally struck it with a pickaxe.

Also of note, regarding the church, is that it is rather unusual for Cornwall in that the tower is surmounted by a square based pyramidal steeple. It is recorded that the top third of the perpendicular style tower was removed during the Victorian era restoration of the building as it leaned towards the church so was replaced by the current one.

Perhaps it would be amusing to speculate that the tiny village of Duloe might have achieved "Leaning Tower of Pisa" mini-fame if the tower had been left as it was before the restoration. 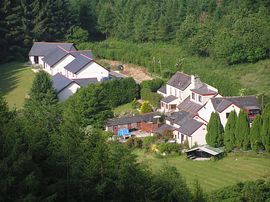 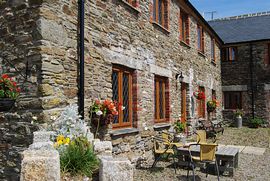 more self catering near Duloe...

Days Out in Duloe

Places to Visit near Duloe