You are here:  Towns -> Places to Visit in County Durham -> Durham

Durham City - The jewel in the county's crown! Compact enough to explore on foot but so exceptional that its magnificent Norman Castle and Cathedral are a World Heritage Site. For over nine centuries the Castle and Cathedral have dominated the town from their dramatic location high above the River Wear. The massive Cathedral is widely acclaimed as one of the world's finest buildings. The original rib vaulted church, an architectural innovation of great importance, took 40 years to build and

was completed in 1133. Since then the Cathedral and St. Cuthbert's shrine have attracted pilgrims and travellers from all over the world.

Founded in 1072, Durham Castle remains one of England's largest and best preserved Norman strongholds. For nearly 800 years it was the principal seat of Durham's Prince Bishops. Since 1836 the Castle has housed the Foundation College of Durham University.

Downhill from the Castle and Cathedral you can still trace Durham's Mediaeval layout in the narrow winding streets. There is 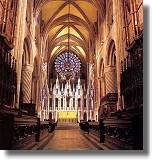 a wide range of shops, including the refurbished Victorian Indoor Market and the new Prince Bishops development. Away from the bustling town centre the shady wooded riverbanks offer a haven of peace with pleasant walks and boat trips on the Wear.

The presence of the University, England's third oldest after Oxford and Cambridge, adds to Durham's character. The University also brings a touch of Eastern culture with its Oriental Museum, Britain's only museum devoted entirely to Oriental art and antiques. The University's

Botanic Garden adds to this international theme, with trees and plants from all over the world. In contrast Crook Hall and Gardens are quintessentially English with a maze and Shakespeare Garden.

The Dli Museum and Art Gallery is one of Durham City's most modern visitor attractions, where you can explore the story of County Durham at War and discover the exciting world of art. Durham also has a number of interesting small museums, providing fascinating insights into the colourful heritage and archaeology of the City and County.

County Durham is served by excellent trunk roads. From the South the A1/A1 (M) Motorway provides fast easy access. From the North choose from the A1 coastal route or the A68 cross-country "Holiday Route" through Northumberland and Border country. From the West, the A66 provides a scenic cross-Pennine route from the Lake District and the M6 Motorway.

There are several luxury express coach services daily to Durham from London and other major centres. Ask your local coach travel agent for details.

There are around 16 high speed electric trains daily to Durham from London, covering the journey in about 2.75 to 3 hours. Fast through trains run from most other parts of Britain. Ask your local Rail Travel Centre for details.

By Air and Sea

County Durham is easily accessible from Newcastle and Teesside Airports, both served by regular domestic and international flights. On nearby Tyneside, ferry services operate to North Shields throughout the year from Bergen, Stavanger, Gothenberg, Amsterdam and Kristiansand.

Days Out in Durham

Places to Visit near Durham