You are here:  Towns -> Places to Visit in Dorset -> Swanage

Things to do in Swanage, Dorset 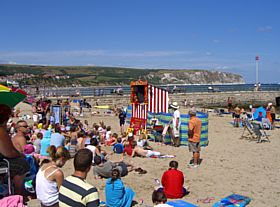 Swanage lies on the southeast coast of Dorset, about 10km south of Poole. It is on a strangely shaped peninsula called the Isle of Purbeck, which is not actually an island at all. It has an east facing sandy bay which makes it popular with summer visitors.

The town was originally a small port and fishing community and it flourished when local quarrying for its prized Purbeck marble was at its zenith. The marble was used for paving the streets of London after the Great Fire of London in 1666.

With the arrival of the railway in 1885, Swanage attracted the attention of wealthy Victorians when sea bathing became fashionable. Tourism remains Swanage's main industry today.

The lighthouse was built in 1880 and two piers were built around that time, one of which was used for pleasure steamers.

Swanage is credited with the development of radar which stood for "radio detection and ranging" when it was worked on in secret during World War II.

Swanage is mentioned in several books including Howard's End by E.M. Forster and international writer and artist, Philip Sugden, was born there.

Swanage is at the east end of the Purbeck limestone and chalk cliffs which are known as the Jurassic coast, a World Heritage Site. Quarrying revealed many fossils in the area which date back to the era of the dinosaurs.

Quarrying is also responsible for local landmarks including the nearby Dancing Ledge and the Tilly Whim Caves. The Old Harry Rocks are a local feature of eroded limestone stacks on the northern headland of the bay.

Visitors to Swanage will find this small town has a good number of local and national retailers and plenty of cafés, pubs and restaurants. It has a couple of amusement arcades and some local cottage industries and several historic churches.

Visitors to Peveril Point cannot fail to notice the large clock tower. It was built in 1854 to commemorate the Duke of Wellington and was erected on the approach to old London Bridge. However, it was soon considered an obstruction to traffic and was moved from London to Swanage and re-erected on the sea front in 1867.

Things to do in Swanage

The beach is the main attraction, especially for families with children. The gentle white sandy beach slopes down to calm waters in this sheltered east-facing bay. Everything from deck chairs to pedaloes can be hired on the beach.

Swanage has a number of local attractions including a Victorian Pier. The Swanage Steam Railway has been lovingly restored and now runs inland to the town of Corfe Castle where the remains of Corfe Castle dominates the skyline. This 1000 year old castle is run by The National Trust.

The Mowlem Theatre is a combined cinema and theatre, with a bar, restaurants and shops in the complex. Checkout what's on and enjoy a night out at this local institution. In the summer, Swanage hosts a Jazz Festival, a Folk Festival and a Blues Festival.

Ballard Town forms a headland between Swanage and Studland and is ideal for quiet walks along marked footpaths. Just south of Swanage is Durlston Bay with a small country park and a nature reserve. 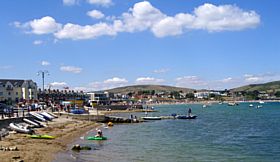 Days Out in Swanage

Places to Visit near Swanage