You are here:  Towns -> Places to Visit in Scottish Borders -> Chirnside

Things to do in Chirnside, Scottish Borders 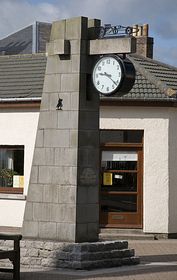 A honey coloured headstone set at a grassy road junction says simply; "Welcome to Chirnside, home of Jim Clark OBE." The Chirnside name is surrounded by a champion's winning laurel wreath and atop is a carved replica of a racing car.

Chirnside itself is a fair sized village with a growing population. The Main Street is on a hill overlooking the fertile fields of the beautiful Tweed valley, with uninterrupted views of the rolling Cheviot Hills in the distance. Here you will find a good mixture of houses. Dinky little terraced cottages are hunched up against more substantial residences with prominent stone porches.

Being situated between Duns and Berwick Upon Tweed; Chirnside is a busy village with all the necessary amenities, more than one church, a post office, a bank, doctor's surgery and a shop or two and with plenty of provision for the hungry and thirsty traveller.

There is a thriving local community with activities to suit all ages. Primary school children have the privilege of attending a 1930's Art Deco 'listed' building that is a pleasure to behold, being long and low and white and blending in perfectly with its surrounding countryside.

Chirnside is noted for several important sons. David Hume, the enlightened philosopher and historian of Ninewells, he also created a large Dove Cote (The circular Nine wells Doocot) which is still standing close by the church, clearly visible but in private land.

Three ecclesiastical free-thinkers; Henry Erskine who sometimes preached in the church, has a large memorial obelisk dedicated to him in the churchyard and Ralph and Ebeneezer Erskine. Ebeneezer, a brilliant speaker, went on to found the Secessionist Church of Scotland. Both Ralph and Ebenezer Erskine were especially noted for the eloquent, passion of their inspiring sermons.

Latterly it was the remarkable 1960's racing driver; Jim Clark; two times world champion for "Team Lotus" and the only British winner of the Indianapolis race, who was to put Chirnside and the County Town of Duns in the world spotlight once more.

The quiet haven of Chirnside Parish Church graveyard is Jim Clark's final resting place. It is here this unassuming ex-farmer lies after his tragic death, at a young age in Germany. His family farmed at Chirnside and an unusual clock in the centre of the village has been erected in his memory.

The only closed-road-race in Britain is held in the Scottish Borders annually in May in memory of this brilliant sporting hero who once stood head and shoulders above the rest and is still revered amongst the modern best. The Jim Clark Museum in Duns records the many achievements during his illustrious career and contains fascinating sporting memorabilia.

Winston Churchill's aunt; Fanny Lady Tweedmouth (daughter of the Duke of Marlborough) and leading political hostess, is buried in what appears to be a private outdoor chapel adjacent to the church. The church has a magnificent commemorative gateway erected in memory of Lord Tweedmouth by his son.

The old mill by Chirnside Bridge is now home to Ahtstrom Paper manufacturers.

The nearby Whiteadder River and footpaths provide pleasant walking along the bankside for man and dog.

A sunny dawn breaking over Chirnside and looking out towards the Cheviot Hills can be a stunning sight of orange purple and gold and an event not to be missed. 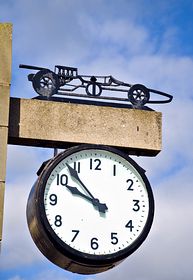 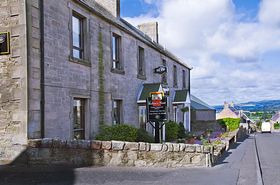 Days Out in Chirnside

Places to Visit near Chirnside