You are here:  Towns -> Places to Visit in Kent -> Chiddingstone

Things to do in Chiddingstone, Kent 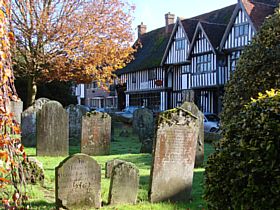 Chiddingstone is a beautiful Kentish village with a perfect row of Tudor houses. Their half-timbered gables, mullions and casement windows, picturesque red-tiled roofs and projecting upper storeys have provided a setting for many films, including A Room with a View, Wind in the Willows and Elizabeth R.

Most of the buildings in Chiddingstone are more than 200 years old, and the building that is now the post office is mentioned as far back as 1453. The entire village has belonged to the National Trust since 1939 and is open all year, though the houses themselves are not open to view. The historic Castle Inn, with its old-fashioned interior and vine-covered courtyard for outdoor drinks and meals, is also owned by the National Trust.

Chiddingstone lies in the Weald, the ancient forest between the North and South Downs. The village was built when the Weald was the centre of the mediaeval iron industry. From the middle of the 16th century the history of Chiddingstone is intimately connected with the Streatfeild family. The first Richard Streatfeild made his fortune as an Elizabethan ironmaster and his descendants were squires and patrons of the village for over 450 years. The curious square stone building in the churchyard, with a pyramidal roof and a wooden door, is the entrance to the Streatfeild family burial vault.

The church of St. Mary also contains some handsome memorials to the Streatfeild family, and has a fine tower with a peal of bells. The living is in the patronage of the Archbishop of Canterbury. After a fire in 1624 much of the church was rebuilt, with the roof of the nave replaced at a lower level - the original higher roof level is still visible. The ground on the south side of the church is much higher than on the north. Its gravestones are almost at window height to the houses just across the high street. This is because the poor of the village once believed that evil spirits haunted the north side of the church, and preferred to be buried on the south so that their souls would be safe. Over the centuries the earth piled up on the south side has made a visible difference.

Chiddingstone Castle was originally a medieval manor house that became the seat of the Streatfeilds. In the early 1900s the house was rebuilt in the Gothic Revival style, a lake was dug and the village street was diverted around it. During the 1930s the whole estate was sold off, and the house was occupied by the Army during World War II.

After a period as a school, the house was purchased in 1955 by Denys Eyre Bower, a passionate collector, as a home for his collections of Egyptian and Japanese antiquities. The house and collections are now owned by a trust and open to the public. The gardens include a park with woodland areas, the ruined Orangery, and the octagonal Gothic Tower of the old well-house. These gardens are now Grade II listed. Chiddingstone Castle has its own postbox, an original 'Penfold'. This is the earliest type of postbox, a hexagonal pillar designed by J.W.Penfold in 1866. It was moved here from St Pancras in London.

A footpath opposite the churchyard leads to the Chiding Stone, a large sandstone boulder just outside the village. The popular tale is that wrong-doers were brought to the stone to be chided by the assembled village. In what period of history this is supposed to have happened is not clear. The stone may have given its name to the village, or perhaps vice versa. It may have been a Saxon boundary marker, a Druids' altar or a place where judicial affairs were transacted by the ancient Britons. In the absence of evidence, you are free to believe any or none of these theories. At any rate, the stone is worth seeing. 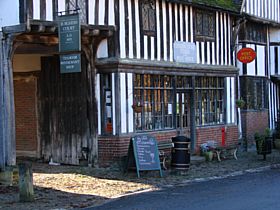 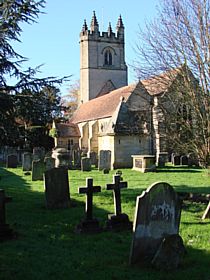 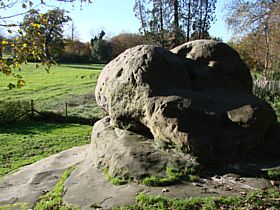 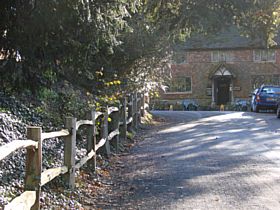 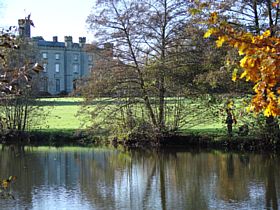 Days Out in Chiddingstone

Places to Visit near Chiddingstone