You are here:  Towns -> Places to Visit in Wiltshire -> Beckhampton

Things to do in Beckhampton, Wiltshire 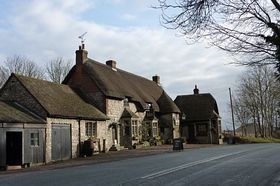 The village of Beckhamtpton lies just off the roundabout where the A4 meets the A361. You would be forgiven, should you miss it, buried as it is behind a wall of trees.

Beckhampton falls within the parish of Avebury and as you might expect, has one or two rather famous landmarks.

The world heritage site at Avebury with its stupendous standing stone circle, is just two miles to the north. The very haunted and widely investigated Red Lion Inn, sits at the centre of the mysterious ring of stones.

Back at the roundabout, head west along the A4 for several hundred yards and you will come across the The Waggon & Horses Inn, which was built in 1669 and boasts a mention in Dickens "Pickwick Papers".

From the inn you have spectacular views of the enigmatic Silbury Hill, dating from around 2100BC and the largest man-made mound in Europe.

Opposite Silbury, why not take a stroll up to the West Kennet Long Barrow burial site, just one of many Neolithic tombs in the area.

Take the road to Calne from the roundabout for half a mile, then park up in the lay-by on the left for beautiful views of the Wiltshire downs.

Take the short walk up to Knoll Wood, site of the gibbet, used to dispatch amongst others, Highwaymen that operated in the 17th century on the old London to Bath track. From the wood carry on to Oldbury hill fort, said to be haunted by the ghosts of Roman soldiers.

Five miles from the roundabout, is the medieval market town of Devizes. With its picturesque Kennet and Avon canal, medieval town walk, ghost walk, castle and tradition weekly market held on a Thursday.

The Beckhampton area is steeped in legend, hauntings and myths, it is peppered with ancient sites and megaliths just waiting to be explored. It is regarded as the hub for crop circle enthusiasts, in fact the Waggon & Horses Inn, is a very popular meeting place for the so called "Croppies".

If you like your breaks steeped in history and mystery then Beckhampton is the place for you.

Places to Visit near Beckhampton