You are here:  Towns -> Places to Visit in Somerset -> Wells

Things to do in Wells, Somerset 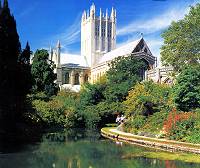 Wells qualifies as England's smallest and Somerset's only city, because of its magnificent cathedral. It lies beneath the southern slopes of the Mendip Hills, and provides a wealth of historical interest and beautiful architecture, while remaining a thriving business and residential community. Among its many famous features are the moated Bishop's Palace, still the residence of the Bishop of Bath and Wells. Vicars' Close claimed to be the most complete medieval street in Europe, Wells Museum and the historic

Wells Cathedral - Probably the finest example of Early English architecture (12th-14th century). Major interesting features include the magnificent West Front with over three hundred carved figures of Saints and Kings. The inverted arches of the nave which were added in 1338, to strengthen the base of the central tower, and the famous astronomical clock, one of the oldest working mechanical clocks (c 1390), when it strikes the hour mounted Knights ride into action.

Battlemented walls and a moat surround

Bishop's Palace; the Palace contains imposing staterooms and is set in tranquil gardens. In the grounds are the springs from which Wells took its name.

Vicar's Close is a street of picturesque 14th century houses originally built to house the cathedral clergy, it is claimed to be the oldest complete street of its kind in Europe.

Wells Museum - In a Tudor building close to the cathedral, the museum exhibits illustrate the history, archaeology, geology and wildlife of the Wells and Mendip Hills area. 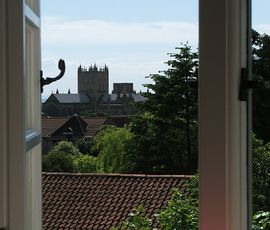 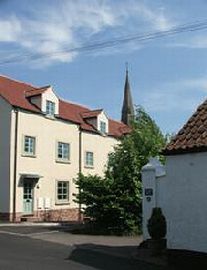 more self catering near Wells...

Days Out in Wells

Places to Visit near Wells