You are here:  Counties -> Things to do in Northumberland

Northumberland, the most northerly county in north east England, has a long coastline with many fine beaches and coastal walks.

The county is largely unspoiled and encompasses Northumberland National Park.

There are many Roman remains here, the most notable being Hadrian's Wall.

In Northumberland more castles are open to the public than in any other county.

The village of Seaton Sluice on the southern coast of Northumberland has an interesting harbour and manmade island.

Lying a short distance inland, this is a masterpiece designed by Sir John Vanbrugh, is well worth seeing.

Set in the Blyth Valley, the town of Blyth is a busy seaport and the largest market town in Northumberland. South of the harbour, the sandy beach is ideal for windsurfing. The town is home to Royal Northumberland Yacht Club, offering sailing tuition at the County's premier harbour. 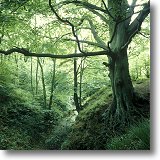 Cramlington is the newest town in Northumberland. It's a centre for modern industry. It's well laid out with an attractive shopping centre, leisure facilities, footpaths and a cycleway network.

East Cramlington is the site of Project 2000 Botanic Gardens - a botanic garden and arboretum conserving beautiful trees and flowering plants. The site is open daily, year round.

Plessey Woods Country Park, beside the River Blyth, contains 100 acres of mature woodland, meadow and riverside with picnic areas and an information centre.

The Wansbeck district takes its name from the local river. Newbiggin by the Sea has the oldest operational the RNLI lifeboat station in the country. It was established in 1851. Bedlington lies inland, and it's a town whose name dog lovers may be familiar with. The locally bred 'Bedlington Terriers' resemble young lambs and are a popular breed. Bedlington Country Park on the banks of the River Blyth, encompasses nature trails and woodland walks.

In Ashington, Woodhorn Colliery Museum gives a fascinating insight into the areas past history of coal mining. Ashington is developing new industries and has good shopping and leisure amenities. QEII Country Park has a large lake enjoyed by windsurfers and fishermen. It's set in parkland, and is complete with walks and nature trails. Wansbeck Riverside Country Park contains, children's play areas, boating and fishing facilities and a four mile walk to the mouth of the River Wansbeck.

The Chantry, in Bridge Street Morpeth is home to Chantry Bagpipe Museum. Northumberland is unique in having its own musical instrument - the Northumberland pipes.

Morpeth is an attractive market town, the administrative centre for the County. Sir John Vanbrugh designed The Town Hall in 1714. A rare 15th century clock tower in the town centre still strikes the curfew at 8.00pm each evening. Several bridges cross the River Wansbeck, leading to pleasant riverside walks. Morpeth is ideally situated for exploring the large area reaching from the coast of Druridge Bay, inland through moors, wooded valleys and historic villages. One of these is Cambo, the birthplace of Capability Brown the landscape architect. Nearby is the 17th century Wallington Hall. It's set in 100 beautiful acres of gardens and parkland and is well worth a visit.

In the Tynedale district, tourist information is available in the ancient market town of Hexham. Hexham Abbey dates from the 12th century, but the remains of the crypt of the Saxon church can still be seen. The Border History Museum featuring the history of the Border Reivers is located in the Old Gaol. The town is home to Northumberland's only racecourse, Hexham Racecourse. Hexham is a good base for visitors to Hadrians Wall, part of which runs through Tynedale.

Tynedale also encompasses Kielder Water and Forest. This is Britain's largest man made forest covering some 230 square miles. It's home to native red squirrels, roe deer and a variety of bird life. Walking, cycling, horse riding fishing and bird watching are all popular pursuits in this area. For further information contact the Forest Information Centre at Kielder Castle.

Kielder Water, within the forest is the largest man made lake in Western Europe. With 27 miles of shore line there is plenty of room for a wide variety of water sports, fishing and ferry cruising. The main water sports centre is at Leaplish waterside Park.

Visitors to Northumberland are often drawn to the 'Heritage Coast'. This is an 'Area of Outstanding Natural Beauty' covering some 40 miles from Amble in the south to Berwick-upon-Tweed in the north. With clean sandy beaches and unspoiled seaside towns like Warkworth its attractions are many.

Warkworth is enclosed on three sides by the River Coquet and dominated by the remains of Warkworth Castle. Alnmouth, on the River Aln estuary is a pretty town and home of the 4th oldest golf course in England. The fishing village of Craster has a picturesque harbour with traditional fishing boats (cobles) and is renowned for its production of Craster kippers (oak smoked herring).

Inland, in the lovely Coquet Valley, is the ancient market town Rothbury. The Northumberland National Park Centre is situated in the town. The first house in the world to be lit by hydro-electricity is to be found on a hill outside the town. The house, Cragside, and its grounds are open to the public.

Alnwick retains its historic atmosphere with cobbled streets, narrow alleyways and fine buildings. Alnwick Castle was a great Border Stronghold. It's the second largest inhabited castle in England and has been home to the Percy family since 1309. Alnwick Garden, a vision of the Duchess of Northumberland, was opened to the public in 2002. It is still being developed, but has been visited by millions of people from around the world. It's a huge tourist attraction for the north of England.

The Islands off the Northumberland Coast

Coquet Island lies off the shore at Amble and is managed by the RSPB. It's home to Puffins, Common and Roseate Terns and Eider Ducks. Boat trips can be taken from May to September to see the birds. While they can be observed from the boats landing is not permitted.

The Farne Islands, a group of some 30 islands, are midway between the fishing villages of Seahouses and Bamburgh. They're one of Europe's most important seabird sanctuaries and are home to nesting puffins, guillemots and kittiwakes in addition to a colony of Atlantic grey seals. Boat trips leave from Seahouses to visit the Farne Islands. Only Inner Farne and Staple are open to visitors from April to September.

The Holy Island of Lindisfarne is linked to the mainland by a causeway which is submerged by high tides twice a day. St. Aiden founded Lindisfarne Monastery in 635. It was here that the Lindisfarne Gospels were written. While these gospels are now in the British Library visitors can view a computerised version in the Lindisfarne Heritage Centre. Lindisfarne Castle is also to be found here. It was built with stones from the priory and is a landmark for miles along the coast.

In the north of the County Bamburgh Castle dominates the Northumberland landscape. It overlooks the village of Bamburgh which is home to Grace Darling Museum. This RNLI museum commemorates the heroine and her father (the keeper of Longstone lighthouse), who rescued survivors from the shipwrecked SS Forfarshire in 1838.

The most northern town in England - Berwick-upon-Tweed has changed hands between England and Scotland many times throughout its history.

During the reign of Elizabeth I the town walls were built to protect it from invading Scots. Today they are still the most complete Tudor walls in Britain. There is a two mile walk to enjoy along the top of the walls, taking in magnificent views as you go. The 15 arch stone bridge over the River Tweed was built in 1611 to connect the town with Tweedmouth across the estuary.

Days out in Northumberland


Places to Visit in Northumberland