You are here:  Counties -> Things to do in Carmarthenshire 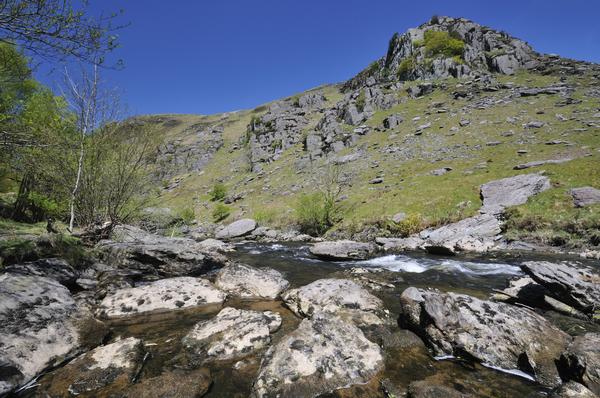 Carmarthenshire is the largest County in Wales, situated in the south west, it encompasses coast line, rolling pasture land, the southern tip of the Cambrian Mountains in the north, the verdant Tywi Valley, the dramatic Black Mountain and the western edge of the Brecon Beacons National Park in the east. Carmarthenshire Tourist Information Centres can supply full information about the County.

The county town, Carmarthen, on the River Tywi, is a busy town with modern amenities and an ancient history. Carmarthen Castle is a ruined 11th century Norman Castle, overlooking the town. Visit Carmarthenshire County Museum,at Abergwili, to learn about the history of the County.

To the east at Llanarthne, is the National Botanic Garden of Wales, opened in May 2000. The garden contains the largest single-span glasshouse in the world and the longest herbaceous border in Britain. The Botanic Garden is still being developed, an unique garden to keep visiting.

Llandeilo is a great base for exploring the many historic castles in the area. Dryslwyn Castle to the west, Dinefwr Park, Castle and Newton House, and Carreg Cennen Castle. Four miles west of Llandeilo, Aberglasney Garden is well worth visiting, the restoration programme is bringing this ancient garden back to life, with a cloister garden, parapet walk and six separate garden spaces to enjoy. Two miles west of the town is Gelli Aur Country Park, 60 acres of wooded parkland surrounding a country mansion, where events and craft demonstrations take place throughout the year.

Llandovery is a pretty market town in the upper Towey valley, on the edge of the Brecon Beacons National Park. In the town itself is the ruins of Llandovery Castle.

In the north east of the County at Pumsaint is Dolaucothi Gold Mines, a Roman gold mine set in the wooded hillside, overlooking the lovely Cothi Valley. There are guided tours of the underground workings, gold panning, exhibitions on gold and mining history and working trains on the mine floor.

At the north west of Carmarthenshire on the River Teifi is Newcastle Emlyn with its ruined castle. The river is famous for world-class fishing of sea trout, salmon and brown trout, the town is a popular base for fishermen. To the west at the beautiful Cenarth Falls is the National Coracle Centre, where coracles are made in the workshop. The Teifi Valley Railway, created from a branch line of the Great Western Railway offers a two mile journey through the beautiful Teifi Valley, a chance to enjoy the age of steam. Four miles east of the town the National Woollen Museum tells the story of the woollen industry of Wales, with demonstrations of spinning, weaving and displays of traditional Welsh textiles.

At Whitland in the west of Carmarthenshire is another of the Counties remarkable gardens, Hywel Dda Gardens and Interpretive Centre, commemorates Hywel ap Cadell, 'King of all Wales' in the ninth and early tenth centuries. The only garden in Europe dedicated to the law, the memorial is divided into six small gardens, each representing a section of the law.

The seven mile beach at Pendine Sands in the south west of Carmarthenshire is famous for land speed records, where Malcolm Campbell broke three records. Visit the Pendine Museum of Speed, to see some of the record-breaking vehicles. To the north is Laugharne, with its picturesque castle, overlooking the Taf Estuary. Laugharne was the home of the poet Dylan Thomas, the Boat House where he wrote "Under Milk Wood" is open to the public. To the north is Llansteffan Castle built by the Normans, near the site of an earlier Iron Age hill fort.

Across the estuary on the eastern side of Carmarthen bay is picturesque town Kidwelly with Kidwelly Castle, one of the best preserved medieval castles in the County. Kidwelly Industrial Museum interprets the former industries of Carmarthenshire, tinplate, coal mining and brick manufacture.

To the south is Pembrey Country Park, encompassing Pembrey Forest and the seven mile beach at Cefn Sidan Sands. On an adjacent site nearby is the Welsh Motor Sports Centre.

Llanelli is an attractive town, situated at the mouth of the River Loughor. Visit Park Howard Art Gallery and Museum, featuring the town's history and a large collection of Llanelli pottery. A mile east of the town is the National Wetlands Centre Wales, the 500 acre reserve is situated at the edge of the Burry inlet, and is designated as a Site of Special Scientific Interest.

The Llanelli Millennium Coastal Park is the largest land reclamation scheme undertaken in Wales, over 2000 acres of industrial wasteland have been restored to create a coastal path and cycleway between Pembrey Country Park and the National Wetland Centre.

Days out in Carmarthenshire


Places to Visit in Carmarthenshire