You are here:  Counties -> Things to do in Ayrshire

Ayrshire is situated in the west of Scotland on the Firth of Clyde.

Along the coast, holiday towns and villages enjoy the mild climate created by the Gulf Stream.

Ayrshire is famous for its fine golf courses at Turnberry, Royal Troon, Prestwick and many more. 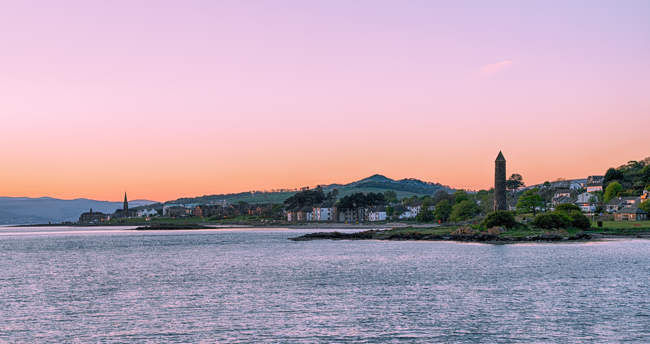 Largs is in the north of the county - its name comes from the Gaelic for hillside - and hills rising over 1,700 feet shelter this popular resort.

There is a shingle beach, a yacht haven, putting green, parks and gardens in the town. 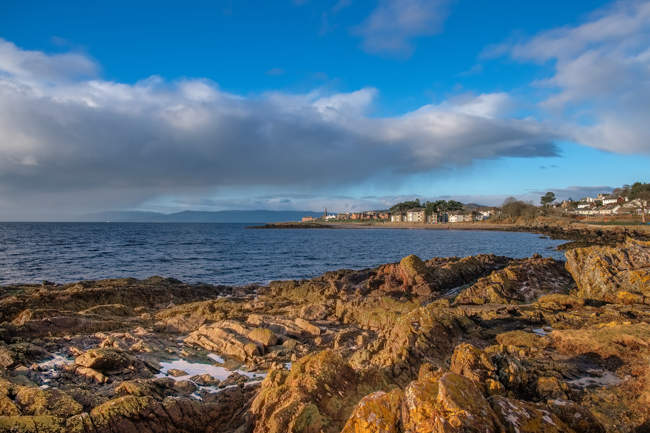 Just north of the town centre is Vikingar, where costumed 'Vikings' tell the tale of the Vikings in Scotland. This is a good rainy day outing, as there are leisure facilities on site. 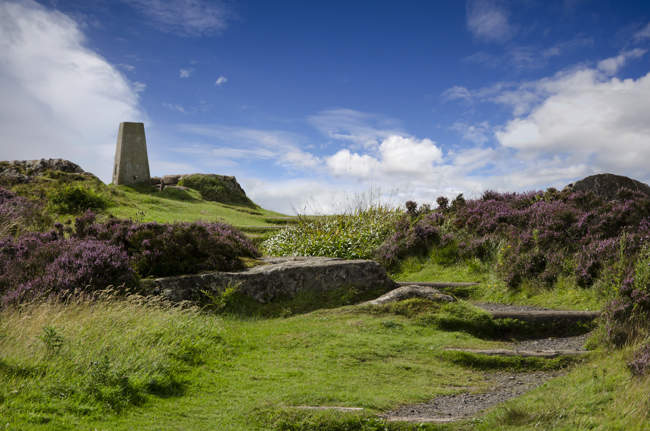 The Island's main town is Millport, which has a good beach and has been a popular resort since Victorian times.

South of Largs in the village of Fairley families can enjoy a visit to Kelburn Castle and Country Centre, home of the Earls of Glasgow.

Kelburn's romantic Glen is regarded as one of Scotland's most beautiful natural woodlands. Children will enjoy the adventure playground and the Secret Forest! 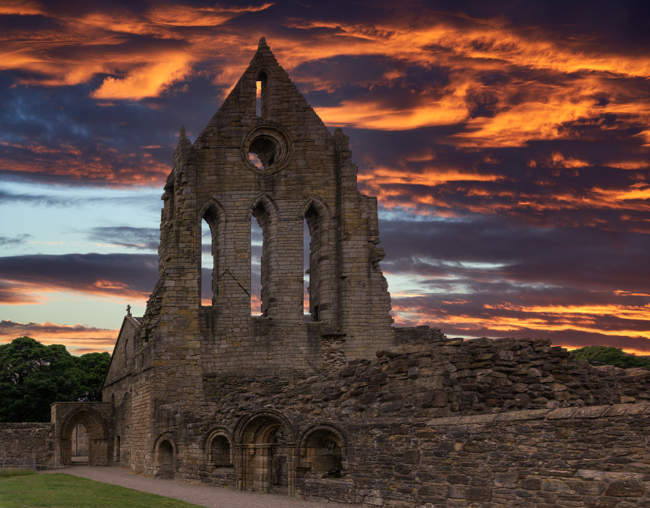 The Old Transept of Kilwinning Abbey

A few miles inland between Kilwinning and Dalry is the Museum of Ayrshire Country Life and Costume, with an extensive collection of Ayrshire farming memorabilia and costume.

Set in unspoiled landscape, visitors can walk through meadow-land or sit by the River Garnock. 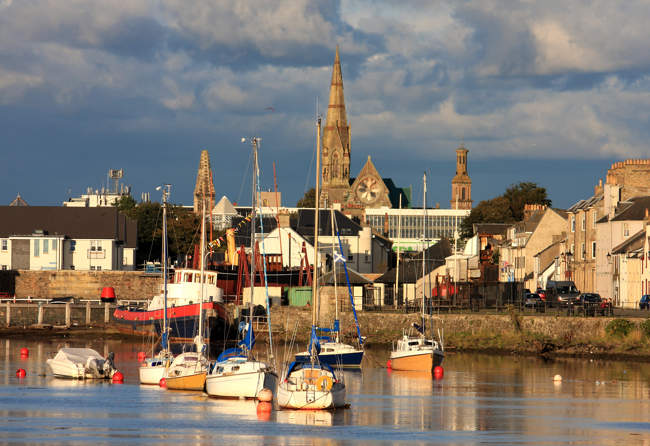 Irvine is the home of the Scottish Maritime Museum. 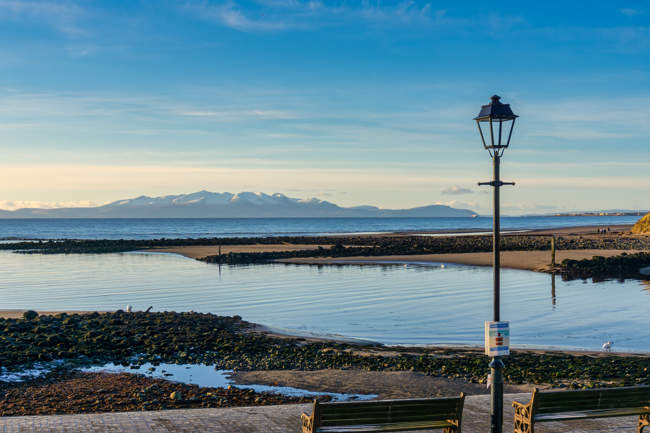 Irvine's residents and visitors alike enjoy the Irvine Magnum, one of Scotland's largest leisure centres, and the Rivergate shopping complex and retail park. 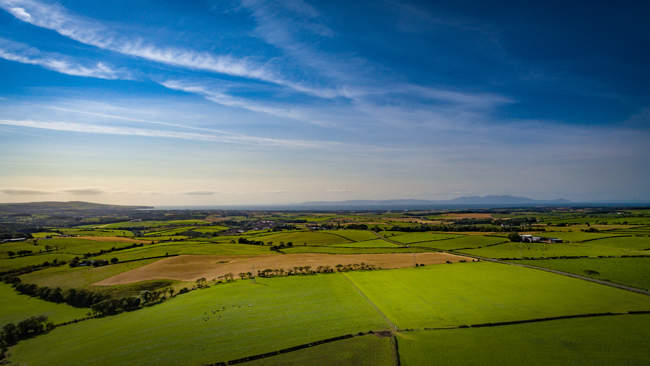 The town of Kilmarnock is a busy shopping centre for the area and is the home of Johnnie Walker whisky and the oldest professional football club in Scotland - Kilmarnock F.C. which was founded in 1869. 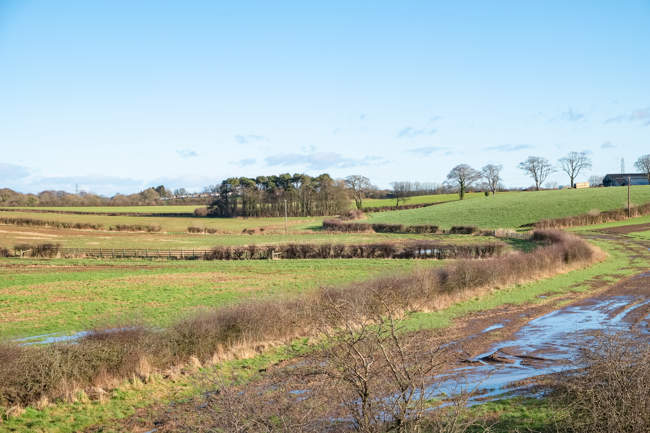 A visit to Dean Castle and Country Park in Kilmarnock makes a great day out for families. 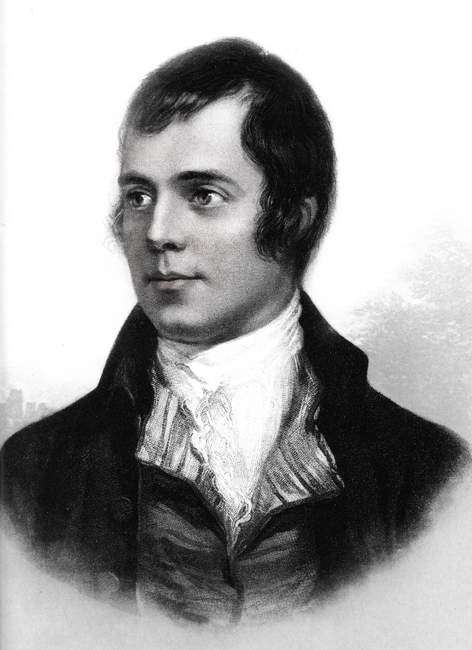 South of Kilmarnock at Mauchline is Burns House Museum, it was here in 1788 Robert Burns and Jean Armour began married life.

Batchelors Club lies east of Mauchline at Tarbolton. Robert Burns formed a debating club here in 1780. It's now a museum where you can learn about the poet's life.

Ayr is the County town of Ayrshire and has much to offer visitors, with fine architecture stretching back many centuries. 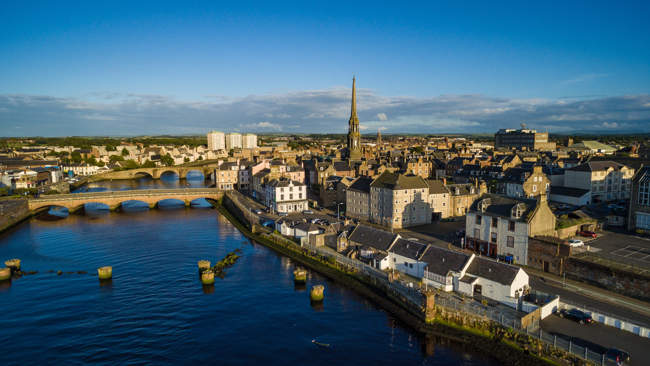 Once the main port on the west coast, Ayr still has a busy harbour and a good beach, which has been enjoyed by holidaymakers since the early 1800s. 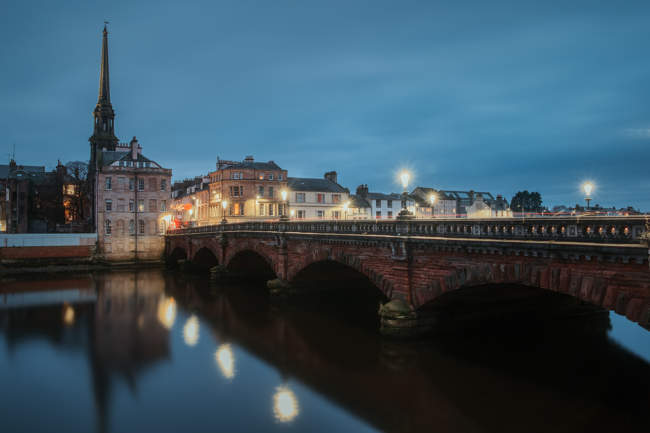 Its racecourse is the oldest in Scotland, offering both National Hunt and Flat Racing.

Rozelle House Galleries and Maclaurin Art Galleries, is a major display venue, with an extensive collection of art on show. 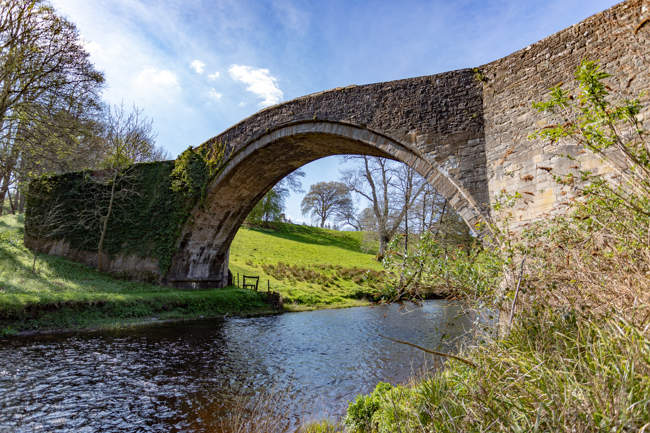 Children will enjoy a visit to Heads of Ayr Farm Park, four miles south of Ayr. There are lots of animals to get to know and indoor and outdoor areas, packed with fun activities.

The village of Alloway on the River Doon, today a suburb of Ayr, is the birthplace of Robert Burns, Scotland's National Poet. 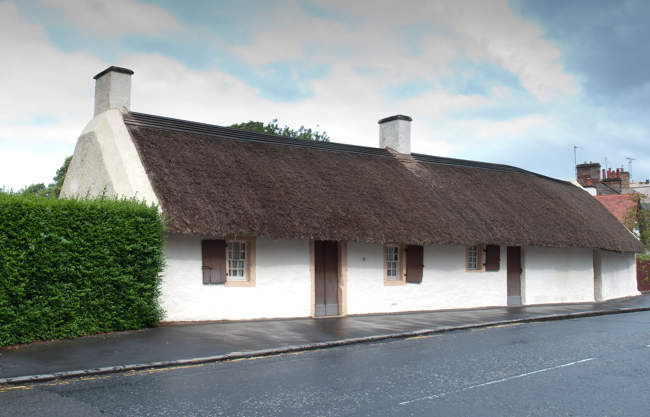 Devotees of the Bard can visit Burns National Heritage Park, which gives visitors an insight into his life and the part of the world that inspired his works.

South of Ayr you will find Maybole, which has an ancient history and fine buildings - from Maybole Castle, dating from the mid 16th century to the late 19th century Town Hall . 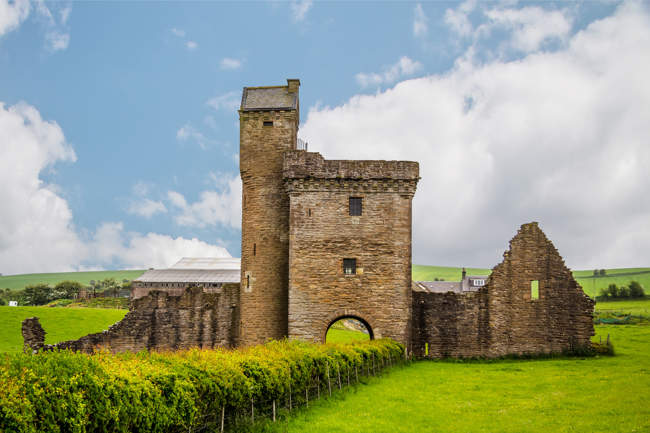 Abbey of Saint Mary of Crossraguel

Two miles south west of the town is Crossraguel Abbey, founded in the early 13th century. 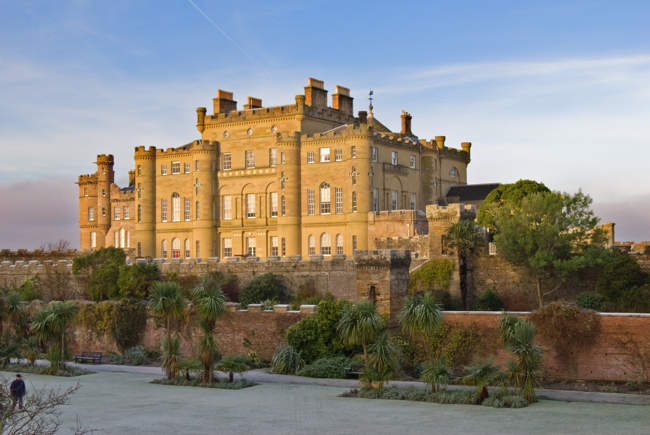 The Country Park is Scotland's first and offers interesting pursuits for all ages.

The attractive little village of Kirkoswald is where Robert Burns met John Davidson the souter (shoe maker), who was the inspiration for 'Souter Johnnie'.

Souter Johnnie's Cottage in Kirkoswald is now a museum in the care of the National Trust for Scotland.

In the south of the county, you will find the attractive seaside town of Girvan. 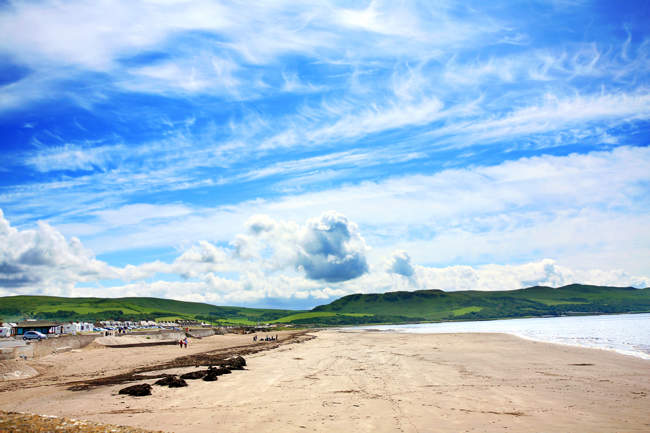 The town has clean beaches, fine views across the Firth, shopping facilities, a boating lake and amusements. 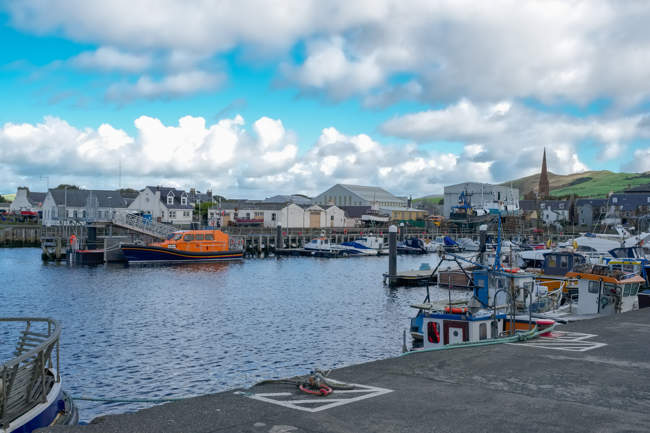 The busy harbour is home to an active fishing fleet and from here boat trips leave for the island of Ailsa Craig.

Ailsa Craig is an RSPB nature reserve, lying 10 miles off the Ayrshire coast in the Firth of Clyde.

It is one of the premier gannet colonies in Britain.

Also nesting on the island are kittiwakes, guillemots, razorbills and gulls. 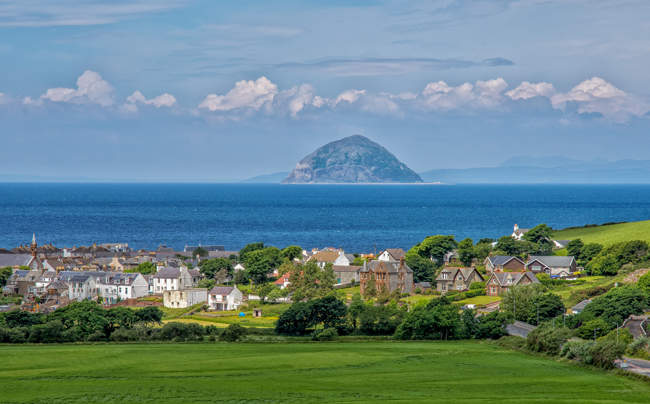 The Island of Ailsa Craig

Puffins are now breeding there after an absence of over a century.

Ailsa Craig is also known for its high quality granite, which is used for curling stones some of which are used in winter Olympic competitions. 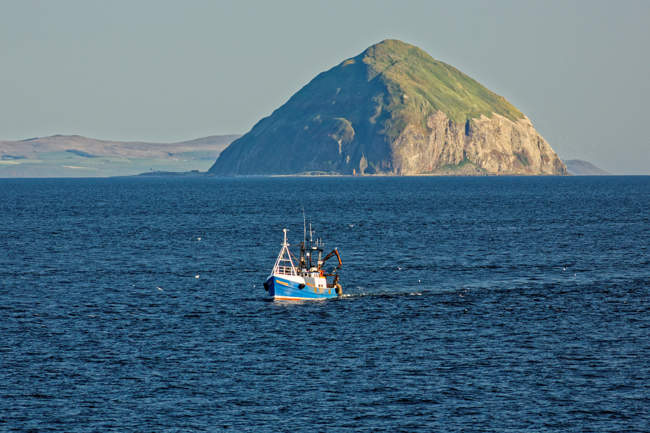 The Island of Arran

Brodick is the Island of Arran's main town. 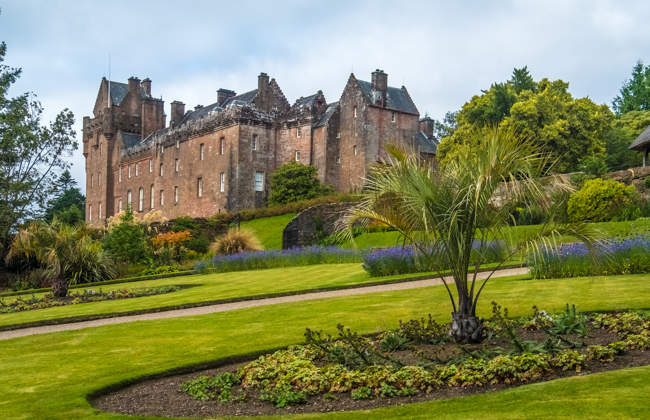 Brodick Castle on the Isle of Arran

Overlooking Brodick Bay is Brodick Castle, the castle was built on the site of a Viking fortress and part dates from the 13th century.

Arran is often referred to as 'Scotland in Miniature', with mountains, hills, glens and streams making up the landscape.

The island is popular for climbing - Goatfell, which at 2,366 feet is the highest peak on the island. 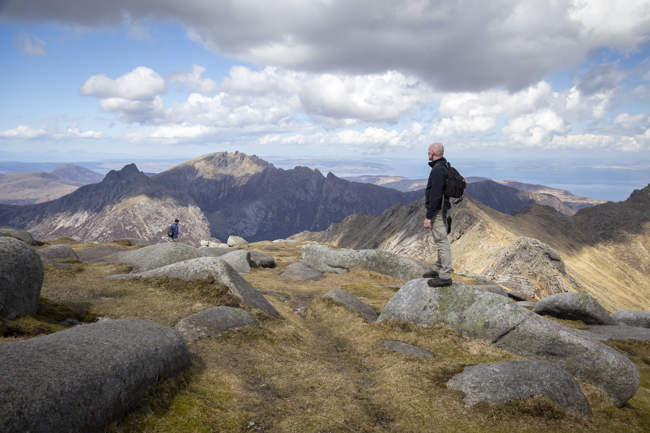 Keen walkers should explore the Isle of Arran Coastal Way - made up of good coastal paths and forest tracks through Arran's countryside.

Arran has several sheltered sandy bays, suitable for water sports and there are golf courses at Brodick, Blackwaterfoot and Lamlash.

In the north of the Island is Lochranza Castle, a tower house, probably a 16th century reconstruction of an earlier building, in a picturesque setting overlooking Loch Ranza. 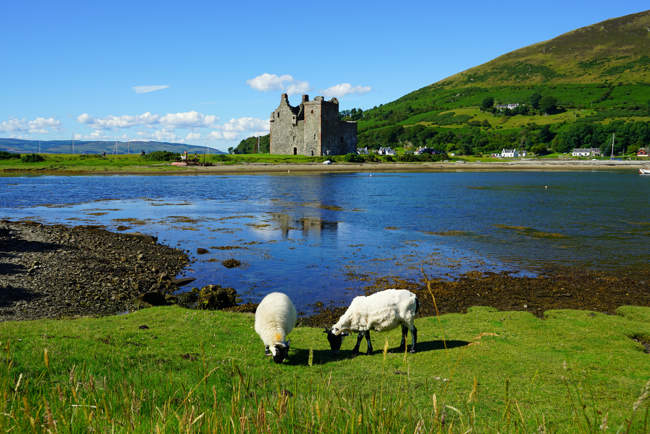 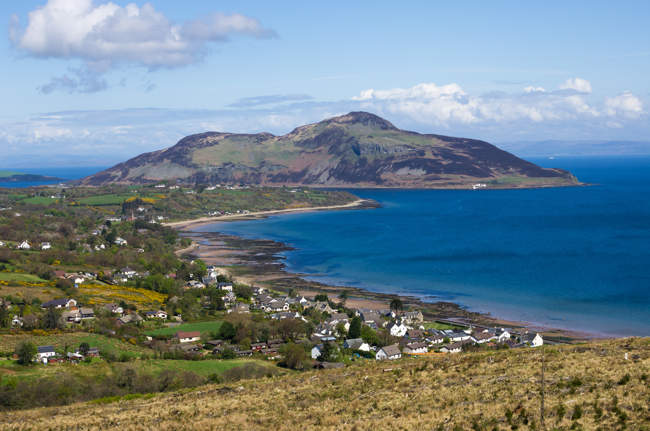 Holy Island has a long spiritual history, stretching back to the 6th century.

It is currently a retreat for the Samye Ling Buddhist community, who carry out extensive conservation work.

Holy Island has an ancient healing spring, the hermit cave of St Molaise, a 6th century monk, and evidence of a 13th century Christian Monastery.

A walk around its coast can be enjoyed, or climb to the summit of Mullach Mor for fine views.

Days out in Ayrshire


Places to Visit in Ayrshire