You are here:  Towns -> Places to Visit in Cheshire -> Widnes

Widnes is a sizeable industrial town in Cheshire. It is situated on the north bank of the River Mersey opposite Runcorn. It is close to the M62, the M56 and the M6 motorways.

Originally the area was a collection of small settlements on the marshy land. In the 10th century the Vikings sailed up the River Mersey and settled on the area of land which they called "Vidnes".

In 1847 a chemical factory opened on Spike Island. By 1862 it was the world's leading producer of alkali along with soap, bleaching powder and borax.

Several more chemical factories were built along the West Bank and Widnes eventually became a major centre for the chemical industry. The town grew up as a result of the demand for housing and amenities for the workers who arrived from Ireland, Poland and Wales. In the late 19th century there were 50 factories and 20,000 inhabitants.

The downside of all the chemical manufacture was that Widnes was not the most desirable place to live at that time - it suffered heavy air pollution from the smoke and by-products of the factories. The Alkali Act of 1862 was introduced to control the noxious vapours.

The Widnes-Runcorn Transporter Bridge was built in 1905 and finally replaced the historic Runcorn ferry which had run from 1105. The area in Widnes known as the "Snig" was where the boathouse and landing was. The Snig Pie House was famous for serving eel pies to those using the crossing. The boathouse and pie shop are gone, but Snig Lane lives on.

The world's first combined rail-canal-dock complex was completed at Widnes Dock in 1845 to transport local salt, coal and later chemicals. Only the canal remains today and the area is now a nature reserve.

In 1909 Widnes was the first place in Britain to have a covered-top double-decker bus service.

The population in Widnes is around 57,500 residents. It is still an industrial town based on the chemical industry with diversification into warehousing.

Listed buildings include the former town hall, the railway stations at Widnes North and Hough Green and several churches including St Luke's and St Mary's.

There is local shopping at the Greenoaks Centre along with the indoor and outdoor markets. The Widnes Shopping Park opened in 2010 with flagship national stores.

Widnes has a strong team in the Rugby League. Nicknamed "The Chemic" they are now officially called "The Widnes Vikings".

Some interesting past residents include Richard Bancroft who became Archbishop of Canterbury in 1604 and Tony Chadwick CBE who became the chief designer for British Aviation in 1917.

Things to Do Around Widnes

Spike Island is now the centre of the Mersey Community Forest. The island has a Visitor Centre and a network of paths through reclaimed grassland, woodland and marshes.

The remaining warehouse on Spike Island, considered the birthplace of the British chemical industry, hosts the Catalyst Museum. This interesting science discovery centre has four interactive galleries reached via a glass-floored lift.

Walks can be enjoyed along the Victoria Promenade at West Bank and beside the Sankey Canal.

At the end of July the Halton Show takes place and includes horse jumping, dare devils, drama, arts and crafts. 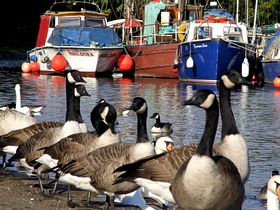 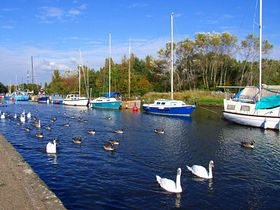 Days Out in Widnes

Places to Visit near Widnes