You are here:  Towns -> Places to Visit in Kent -> Westgate on Sea

Things to do in Westgate on Sea, Kent 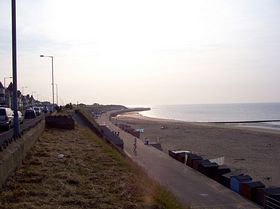 Westgate-on-Sea is a seaside resort in northeast Kent, overlooking the River Thames estuary about two miles west of Margate. It is situated on the Isle of Thanet which was a separate island until the channel silted up in the 18th century.

Westgate was named after the mediaeval Westgate Manor which was located close by. However, earlier inhabitation in the area was proved when the remains of a Roman villa were discovered in Beach Road.

Originally a small farming community, Westgate-on-Sea was placed on the map when a coastguard station was built there in 1791. It can still be seen, along with its coastguard cottages on Old Boundary Road.

Westgate-on-Sea expanded in the 1860s as it became a popular tourist destination. Local businessmen developed the area, aimed at attracting the middle classes. At that time the sea wall and promenade were built. With the arrival of the railway in 1871, Westgate-on-Sea rapidly expanded to 2,738 residents by 1901.

During World War I a Royal Naval Air Service seaplane was based at St Mildred's Bay and was used to defend the Thames estuary.

Famous former residents of Westgate include Sir Erasmus Wilson, a 19th century surgeon, and William Temple, the former Archbishop of Canterbury. Perhaps Westgate-on-Sea's main claim to fame is that poet laureate, Sir John Betjeman, wrote a poem about it.

Modern-day Westgate-on-Sea has a population of approximately 6,600 which swells considerably during the summer with visitors to its two sandy beaches, St Mildred's Bay and West Bay.

Hotels and guest houses line the seafront and the high street has a good range of local shops and services. The town has two local churches; the parish church of St James, built in 1872 and the Church of St Saviour, designed by architect C. N. Beazley in 1884. That year the area had a slight earthquake which caused the church bells to ring wildly!

The Westgate Pavilion Theatre started life as the Coronation bandstand, built in 1903 to celebrate the crowning of Edward VII as king. It was actually used as sleeping quarters for members of the Royal West King's Regiment during World War I and was later converted into a theatre.

The Swiss-Gothic building in the centre of town was intended to be the town hall in 1910, but instead it became the Carlton Cinema which has three screens.

Westgate-on-Sea is on the Chatham Main Railway line which runs from Ramsgate to London Victoria and is ideal for commuters.

Things to do in Westgate-on-Sea

Most visitors to Westgate-on-Sea enjoy spending time on the beach. St Mildred's Bay is the larger of the two and has beach huts, chairs and watersports equipment for hire. Nearby there are public tennis courts and a putting green. West Bay has some rock pools which provide hours of fun for children.

Golfers will appreciate the 18-hole, 4,869-yard Westgate and Birchington Golf Course which has great sea views from its clifftop position. The Cricket Club hosts several competitive matches during the summer and Lymington Road Park has a skateboard park for youngsters.

Days Out in Westgate on Sea

Places to Visit near Westgate on Sea