You are here:  Towns -> Places to Visit in Somerset -> Swainswick

Swainswick or Swanswick or Swayneswycke is a quite small village spreading itself down the old A46 road from Upper Swainswick to Lower Swainswick this road has now been bypassed by a new road relieving decades of summer traffic congestion leaving Swainswick a peaceful place to be.

Overlooking Swainswick and within easy walking distance, is Solsbury Hill, which is a plateau, famous as an Iron Age Hill Fort occupied between 300 BC and 100 BC.

Walk around this plateau and you can still see parts of the old dry stone walls which enclosed the fort. Take your camera as there are spectacular views all the way round, of the towns of Bath, Batheaston, Bathampton and even on a clear day you can see the hills of Wales. This is a very unspoilt area rich in wild life.

Solsbury Hill is also famous because of the song by British musician Peter Gabriel about a spiritual experience on top of the hill. Gabriel wrote the song after his departure from the progressive rock band Genesis.

Swainswick has many quiet lanes passing through the old village and all the way up to Lansdowne. The old part of Upper Swainswick has a charming 11th century Norman church and Manor House.

The legend of Prince Bladud has always been associated with the village of Swainswick, Prince Bladud lived around 800 BC and was the son of Lud Hudibras, King of the Britons. During his travels abroad Bladud contracted a skin disease, thought to be leprosy. On his return, he was banished from the tribe and found work as a swineherd in the Avon valley.

His pigs became infected and diseased also, his search for food for the pigs brought him to Swainswick, where a farmer advised him to look for acorns on the far side of the river. He came to a place where the pigs began to wallow in hot mud. To entice them out, he climbed an oak tree, collected some acorns and made a trail out of the mud. As the pigs came out, he scraped them clean and found their skin was cleansed and cured.

Bladud jumped in and bathed himself in the mud. He emerged to find his skin clear and his disease healed. Bladud returned to the tribe where he later became King. In due course, he sent his servants to Bath to establish a settlement, building a temple by the hot springs around which the City grew.

Sadly Bladud is not as revered as he used to be in Bath. His statue sits out of the way in a field on Entry Hill Lane. His name was given to two of the old pubs in Lower Swainswick.

In Lower Swainswick there is the delightful Alice Park, eight acres in all with a children's play area with tennis courts and a café.

Description by Janice Self 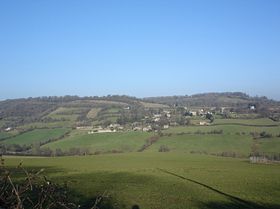 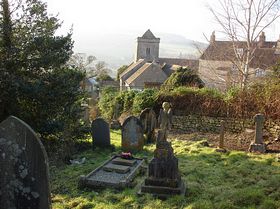 Places to Visit near Swainswick