You are here:  Towns -> Places to Visit in Norfolk -> Hopton on Sea

Hopton-on-Sea with its wide sandy beaches is just six miles south of Great Yarmouth. It is best known for hosting the World Indoor Bowls Championships each January in a series of tournaments at Potters.

Hopton-on-Sea is a small town of 2,700 residents but it has far more summer residents during the holiday season. It has been popular for seaside breaks for generations of families and it was the location for a Constitutional Holiday Camp in the mid-20th century. Londoners would escape by train and stay overnight in the brick built chalets along the seafront to enjoy the fresh sea air and sandy beach.

Hopton-on-Sea is a friendly community centred mainly on the beach and cliffs. It has some local convenience stores along the main street serving local needs along with a post office, a take-away, hairdressers and some arcades.

The current church has some notable stained glass windows which were designed by William Morris and Edward Burne-Jones, both keen advocates of the Arts and Crafts movement. The ruins of the old church are now being restored to create a village centre.

The local pub in the village is the White Hart Inn and serves home-cooked food, with a good choice of ales and wines to choose from.

Down on the beach, the golden sands are long and clean, backed by gentle grassy cliffs with the town sitting above. The beach is divided up by groynes and on the horizon the Scroby Sands offshore wind farm can be seen.

Things to do in Hopton-on-Sea

With Lowestoft and Great Yarmouth nearby there is plenty of shopping and theatre entertainment within easy reach. Both towns have plenty of restaurants and pubs for dining out close to Hopton-on-Sea.

Boats trips can be taken to Scroby Sands which has a large colony of seals and is also the base for one of Britain's largest wind farms.

Visitors can visit the most easterly point in the UK at Lowestoft Ness which is marked by a Euroscope. This shows how far a number of places are from the geographical marker.

Within easy reach of Hopton-on-Sea are several attractions which are ideal for families with children. The Pets Corner at Nicholas Everitt Park in Lowestoft has various small animals, ducks, rabbits, sheep and pygmy goats in a park setting with a picnic area and children's playground. Also, the Redwings Horse Sanctuary always has plenty going on and entrance is free.

Images of Hopton on Sea 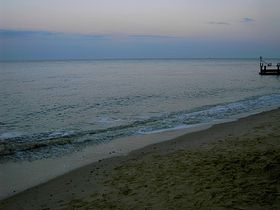 Days Out in Hopton on Sea

Places to Visit near Hopton on Sea