You are here:  Towns -> Places to Visit in Norfolk -> Hemsby

Things to do in Hemsby, Norfolk 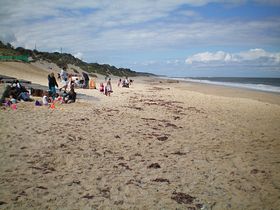 Hemsby is a small seaside village in Norfolk, just a few miles north of Great Yarmouth. It has around 3,000 residents.

A county map of the area around Hemsby in 1610 shows a very altered scene from today, with a large headland called the Winterton Ness now all but disappeared due to sea erosion. Certainly the invading Vikings who arrived in search of slaves and loot would have seen a very different coastline.

By the 11th century the village was listed as Haimesbei, not so different from the name we have today. The manor was described in the Domesday Book as having 43 meadow acres, three slaves and 160 sheep and later a priory was established.

The village expanded with the advent of tourism in the Victorian era. It cleverly markets itself as "1200 Years of Seaside Fun" and plays on its Viking past. In recent years it has started an annual Viking Festival in mid-June.

Benny Andersson of Abba fame performed at the first festival and judged an Abba tribute band competition of local talent. The festival also has Viking battle re-enactments and a Scandinavian market among other fun events.

The sandy beaches at Hemsby draw many summer visitors. Separated from the sea by huge sand dunes, Hemsby village is about a mile inland from Hemsby Beach. The wide bay and extensive sand dunes give Hemsby a good deal of protection from the eroding waves which have affected other villages along the Norfolk coast more severely.

The beach at Hemsby still has the remains of several anti-tank blocks on the sands, a relic from World War II sea defences. The beach is surrounded by beach chalets and holiday homes and was until recently the site of a local Pontins holiday camp.

This site is now destined to be the "Eden of the East" with an eco-park within giant domes, similar to that at Cornwall's successful Eden Project.

As you would expect there are several cafés, colourful amusements and small shops serving the beach and there is an inshore lifeboat.

The village of Hemsby has a local supermarket, pubs, a hairdressers, gift shops, a fish and chip shop and a Chinese restaurant along with a few other local services. The main focal point of the village is St Mary the Virgin Church which has been a landmark in the area since the 12th century.

Other more modern landmarks are the wind farms in the area at Blood Hill and offshore on a sandbank at Scroby Sands.

Things to do in Hemsby

Hemsby is known for its amusement arcades. It offers ten-pin bowling, crazy golf, fairground rides, bingo, a play area and other activities for all ages.

Hemsby is four miles from the scenic a href="/articles/the-broads-national-park.asp">Norfolk Broads National Park where boating and wildlife offer a quiet day out with nature.

There is a regular bus service to Great Yarmouth, seven miles away, which has museums, restaurants, nightclubs, a racecourse and a casino for more lively entertainment. 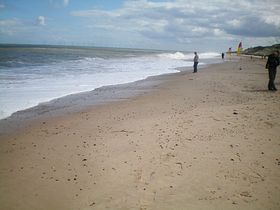 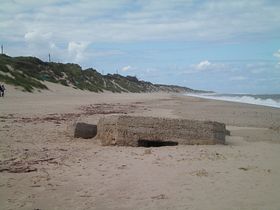 Days Out in Hemsby

Places to Visit near Hemsby