You are here:  Towns -> Places to Visit in Cambridgeshire -> Great Staughton

Great Staughton is divided into three distinct parts. The Highway straddles the B645 and is chiefly noted for the famous sundial, dating from 1637 and the White Hart, a 17th Century coaching inn. The historic heart of the village is the Town which lies half a mile from the sundial, down the minor road to Little Staughton. The Town is dominated by two celebrated buildings: the Church of St. Andrew, which dates from the 13th Century and Place House, built in 1539.

Like many apparently unassuming English villages, Great Staughton conceals a surprisingly rich and varied history, beginning with a settlement in Neolithic times. In more modern times, the village makes a fleeting appearance as a backdrop in Georgette Heyer's historical novel, Sprig Muslin.

However, it was the Romans who were the first to leave their calling card here. In 1958/9 a substantial winged corridor-type Roman villa was excavated to the south of the village. The site was carefully chosen, being near to the Dorchester-on-Thames to Alconbury Roman road. Water from Whitley brook was used for heating the villa via hypocausts, and washing facilities for the similarly impressive bathhouse were built nearby. The occupants were probably important officials in the Roman administration, to judge by their lifestyle. It dates from between AD 130-370.

It was not until some 600 years after the departure of the Romans that Great Staughton appeared in historical documents. By a charter (actually a will) dated October AD 989 Aelfhelm Polga, a loyal knight of King Edgar, donated the church and parish of Stoctune to Ramsey Abbey.

The village, and its knightly landlords, appear in numerous legal documents over the next two centuries. In 1275, Sir Adam de Creting was granted land on which he built a motte and bailey castle, subsequently transformed into a fortified stronghold. Although nothing now remains of the stronghold (called Cretingburgh or Cretingsbury in old documents), the strategic advantages of the location are readily apparent, and the views are impressive.

Sir Adam de Creting, born in Chepstow, was Marshal of Edward I's army in Gascony, and Sheriff of Cork. He held lands in Suffolk (Creting, from which he took his name), Staughton and Wales. In 1275, on the ridge dominating the southern side of Great Staughton, he built a motte and bailey castle which quickly became the Manor of Staughton and grew in extent and solidity until it became known as Cretingsbury. In 1295, Adam was killed in Gascony, whilst participating in Edward I's campaigns.

Sir Adam's successors, the Wauton or Walton family, were to play an important role not only in village life but in national history. Sir George Wauton, whose impressive memorial, erected and paid for by Sir Henry Cromwell, can be seen in the church, was a staunch patriot who, in 1588, gathered together a troop of 20 Staughton men, and marched them to Tilbury to help defend the country against the Armada. He also donated the tenor bell to the church in 1600, and this can still be heard and seen to this day. His heir, Valentine Wauton, who married Oliver Cromwell's sister Margaret, evokes perhaps less fond memories. He was one of the signatories of King Charles' death warrant.

The history of Staughton is to a large extent the history of the church, and St. Andrew's certainly repays a visit. The superb double monument to the Dyer family is one of the glories of Huntingdonshire, and should be visited. Sir James Dyer was speaker of the House of Commons in 1558 and Lord Chief Justice of the Common Pleas. He died in 1582, and is depicted with his wife Margaret, who died in 1560. The memorial also shows Sir Richard Dyer, who died in 1605, and his wife, Marie.

Before leaving the church, it is worth deciphering the tragic tale revealed in the fading inscription on the West facade of the tower.

Opposite the church is Place House, originally built in 1539 by Oliver Leder; it was in medieval times a substantial moated manor house, but much of it was unfortunately destroyed by fire in the 17th Century. The house now belongs to the Duberly family who have played an important role in the history of the village since the 18th Century.

The story and exploits of the remarkable Fanny Duberly are worth re-telling. During the Indian Mutiny the "daring and vivacious" Mrs. Duberly covered 2000 miles in 11 months on horseback, accompanying a detail of her husband's regiment, and winning the admiration of senior officers as an example to the men.

When Major Duberly was posted to the Crimea with the 8th Hussars, Mrs. Duberly decided to go with him. From a vantage point, she watched the famous Charge. "What can those skirmishers be doing?", she asked. "Good God, it is the Light Brigade!". Her husband, fortunately for him, was guarding Lord Raglan and so escaped the slaughter. Her journal gives a vivid and sometimes shocking account of her experiences in the Crimea. Her life is also commemorated in a book, "Mrs. Duberly's Campaign" by E.E.P. Tisdall. She also features in Cecil Woodham-Smith's book on the Crimean War, "The Reason Why".

Staughton's most famous monument is the sundial which stands on the Highway near the White Hart Inn. Underneath the date of 1637, the initials E.I. have been carved into the stone. For many years a mystery (even the Victorian County History offers no explanation), it now seems fairly clear that the monument was erected by one Edmund Ibbutt, who was a major landowner in the village between the 1630s and the 1660s. In 1633 he donated a bell to the church which is still doing stalwart service. His name also features regularly in the churchwardens' accounts: quite why he decided to build a sundial will probably always remain a mystery.

Great Staughton also has a curious connection with the Romney Hythe and Dymchurch narrow gauge railway. Between 1911 and 1913, Captain J.E.P. Howey, a wealthy railway buff, decided that Staughton Manor was the ideal site for his most ambitious undertaking to date: the construction of a 15" gauge railway complete with a station (Staughton Manor) and a scale model of the Forth railway bridge. Photographs show Capt. Howey on the footplate of the impressive 4-6-2 Class 30 Little Giant locomotive, the only one of its class built by Basset-Lowke in Northampton.

Like many English villages, Great Staughton has seen many changes since the war, none more so than in the past twenty years, when a new residential development brought a substantial increase in the village's population. It still retains its rural character; the church plays an important role in the community. We have a village school.

Staughton also plays host to a wide variety of flourishing clubs and societies, including a successful drama company, a social club, indoor bowls, a horticultural society, whose annual show in August is one of the high points of the village calendar. Sports are well represented, with a tennis club, and football and cricket a feature of the superb green.

Another recent testimony to the health of the village was the creation of some 50 miles of entirely new rights of way which explore the history, flora and fauna of the surrounding region. A book ‘Walks around Great Staughton' written by three local residents, celebrates the opening of the new paths.

The village has two pubs, the Tavern on the Green and the White Hart, both of which serve meals. 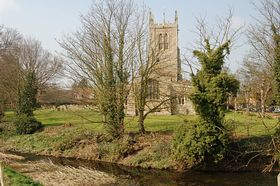 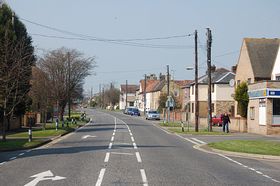 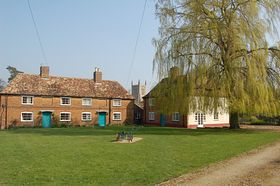 Days Out in Great Staughton

Places to Visit near Great Staughton