You are here:  Towns -> Places to Visit in Oxfordshire -> Dorchester

Things to do in Dorchester, Oxfordshire 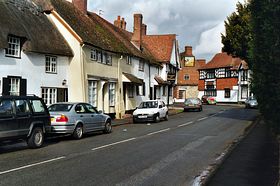 If you're a fan of 'Midsomer Murders' you might be unaware that you are gazing at a few of ancient Dorchester's fine views in some of their episodes. It's not hard to see why this picturesque town, situated between the River Thame and old River Thames in south Oxfordshire, is often used as a drama location.

Absorbing the quaint atmosphere of the High Street on a Sunday afternoon, for example, you can find yourself drifting back to a more languid age where it's almost time for tea.

There is much of archaeological interest in Dorchester. Evidence that the town has been occupied for thousands of years is revealed in the Dyke Hills of the late Iron Age and the allotment site where archaeologists have revealed the remains of a Roman town.

The focal point of Dorchester is the Abbey. This magnificent building was originally constructed in 1140 on the site of an Augustinian monastery of which only the medieval abbey church remains. It is said that in 634 Pope Honorious I sent Birinus to convert the Saxons of the Thames Valley to Christianity.

In 635 AD Cynegils, King of the West Saxons in England, was baptised in the Thame by Saint Birinus and Dorchester became the capital of Wessex. Cynegals then gave Dorchester to Birinus and he built a wood-framed cathedral on the land. The present mainly Norman Abbey is on the same site and the whole momentous event is captured in a striking stained glass window depicting Cynegils with Birinus.

The Abbey contains many intriguing features. The red topped roofs poking through the trees as you approach the town after a leisurely walk along the Thames path invites you to explore. Characteristics such as the Jesse Window - a window combining 14th century tracery and stained glass depicting Christ descended from King David's ancestor Jesse and the Birinus Shrine (not the original as it was demolished in 1536) with some of the original medieval rib vaulting haunts the shadowy interiors.

Besides this lies the Dorchester Knight in its renowned twisted pose and thought to be William de Valance the Younger who died in 1282. Just inside the entrance some medieval wall paintings have been revealed and in the floor is a tombstone with a moving inscription dedicated to a young woman who died a 'martyr to excessive sensibility' believing her husband to have been unfaithful. Perhaps it is her footsteps that certain proprietors believe they have heard when the Abbey is shut.

Alongside is the Cloister Gallery displaying a collection of carved medieval stone entitled 'If Stones Could Speak'. It is a diverting story of the ages of the Abbey in its stonework.

An exploration of the charming little museum next door, once a very old Grammar School, and part of the Abbey's guest house of 14th-16th centuries origin, is worthwhile as it is laid out as a schoolroom would have been and is full of scenes of local history.

By then it really is time for tea! Next to the museum is the legendary Dorchester Tea Rooms and it's the perfect stop for afternoon tea. All manned by volunteers, they serve a variety of cakes with tea, coffee or chocolate which can be enjoyed in the tranquil surroundings of the walled garden area of the Abbey or inside round a large communal table laden with a mouth-watering arrays of home made cakes!

The tea rooms sell their own recipe book 'Heavenly Cakes' and in it one of the team of volunteers states 'the tea room continues a long tradition of hospitality on this site. In medieval times the Abbey Guest House provided food and shelter for the Augustinian monastery'. It opens from Easter to September and all proceeds go to the Abbey and various charities.

Time for a Walk

After tea, stroll through the archway and walk by the river. Or wander down the High Street to look at the old post office, the antique shops and perhaps later have an evening meal in one of the pubs - the 1495 George Hotel, a coaching inn with an impressive carriage outside (featured in Midsomer Murders), the White Hart, or the 16th century Fleur De Lys, all of which have bundles of that characteristic English charm that is in such danger of being lost forever.

Those of a sporting inclination can enjoy facilities for fishing or sailing in the Dorchester Lagoon, and there is an annual regatta at the Dorchester Sailing Club. 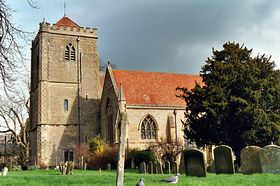 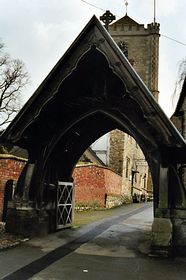 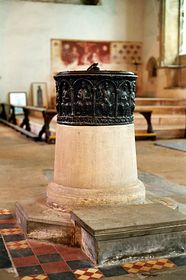 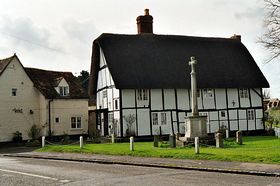 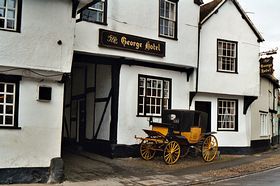