You are here:  Towns -> Places to Visit in Aberdeenshire -> Cock Bridge

Things to do in Cock Bridge, Aberdeenshire 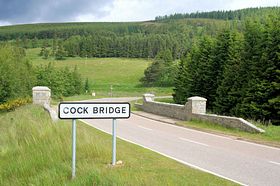 The tiny hamlet of Cock Bridge is in Aberdeenshire, about 53 miles west of Aberdeen and a similar distance east of Inverness.

The small community is set in the Cairngorms National Park surrounded by forested hills, forbidding mountains and spectacular natural scenery.

The nearest place of note is Corgarff, a mile and a half away. Corgarff Castle was built in 1550 and was of strategic importance on the routes between Speyside, Deeside and the Moray Firth.

Cock Bridge is situated on the A939 highway which is known as one of the most beautiful stretches of road in Scotland.

However, it is notorious for being one of the first roads to be blocked by snow in the winter as it runs over high ground between Tomintoul and Cock Bridge.

From the hamlet, the A939 climbs northwest for eight steep miles before navigating through the Lecht Pass at a height of 2,089 feet above sea level.

The road then drops into the village of Tomintoul, the highest village in the Highlands.

This neighbouring village, like much of the area, was built by the local laird in the 18th century as a planned village for his tenants.

Cock Bridge is well located between the lovely Don Valley to the east and Speyside, the home of single malt Scotch whiskies to the north.

It is in a remote and beautiful area of northeast Scotland. The surrounding high moorland is ideal for forestry and sheep farming.

The village is little more than a signpost and a scattering of isolated farmhouses and stone cottages lining the road.

The hamlet is in a pretty part of the Upper Donside and is surrounded by wooded country which is ideal for walking, fishing and bird spotting.

The beautiful area is also popular for mountain biking, including the challenging ascent of nearby Ben Newe.

Things to do in Cock Bridge

This area of Aberdeenshire is known for its Castle Trails. The nearest castle is Corgarff Castle, which is within walking distance of Cock Bridge.

The 16th-century defensive tower was where Margaret Forbes was burned in 1571 along with her family by the feuding Gordon family.

In 1745 the castle was seized after the failed rebellion and was reinforced as a garrison with defensive outer walls.

By the 19th century, it was used to keep a watchful eye open for whisky smuggling. It is now managed by Historic Scotland and is open to the public.

Whisky aficionados will enjoy touring the local whisky distilleries around Strathspey and sampling the world-famous malt whiskies which are produced here.

The Lecht, just a few miles from Cock Bridge is a well-known ski resort during the winter and is generally ranked in the top five in Scotland. It offers tubing, skiing and snowboarding with a chairlift rising to 2,500 feet.

In summer, Lecht marks the start of the long-distance hiking trail, the Speyside Way which runs from the Moray coast to the edge of the Grampian Mountains following the Spey Valley.

The River Spey is also one of Scotland's premier salmon rivers where spey casting was first developed by fly fishermen 150 years ago. 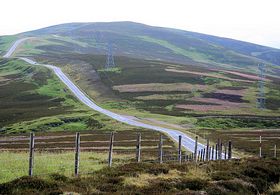 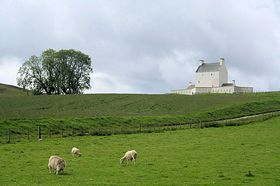 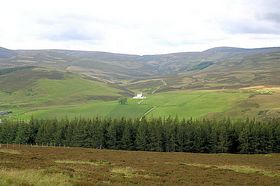 Days Out in Cock Bridge

Places to Visit near Cock Bridge