You are here:  Towns -> Places to Visit in South Wales -> Cefn-coed-y-cymmer

Things to do in Cefn-coed-y-cymmer, South Wales 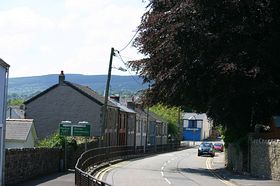 Cefn Coed y cymmer is a small but lively village near Merthyr tydfil very near to the wonderful Brecon beacons it was once part of Brecknock (Powys) but now comes under Mid Glamorgan. When the slums of the old miners cottages were cleared in the fifties, a new village was built near by further up towards Ponsarn in Vaynor called Trefechan and more housing spread up the mountain side giving the area a unique look.

The High street has two very fine public houses the Lord Raglan and the Drovers Arms, both are well worth a visit and you will find the locals very friendly. The Station hotel is very close to where the old railway station used to be, but the line is now a hiking and cycle path, which will take you down to Cardiff in the south and Brecon in the north as part of the Taff trail,

Cefn has a very fine Viaduct that used to carry the Old track which was lost during the railway cuts by Beeching in the sixties. The last passenger train crossed the bridge in the mid sixties, but was used for a few more years to carry stone from the Vaynor quarry near Trefechan.

The area boasts some of Britain's most lovely countryside, with an abundance of birds such as Buzzard and Merlin in the hills and Dipper, Kingfisher and Redstart in the valley, keep a look out for the wonderful Red Kite who visit the area from further up in the Beacons.

Places to Visit near Cefn-coed-y-cymmer