You are here:  Towns -> Places to Visit in South Wales -> Cardiff

Things to do in Cardiff, South Wales 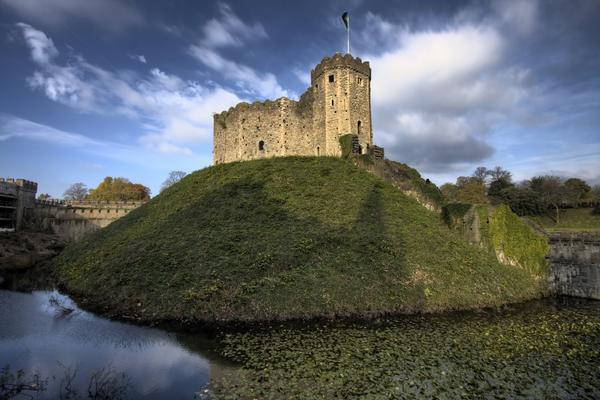 Cardiff was proclaimed capital of Wales in 1955, and is Europe's youngest capital city. Situated on the Bristol Channel, the city has a proud heritage of being one of the great seaports of the world.

Today Cardiff is an exciting city to visit, a rich blend of ancient and modern, where the city's fine Victorian and Edwardian architecture is being complemented by some of the most inovative of new developments.

Cardiff's name is derived from the Roman general Aulus Didius - Caer Didi, meaning "Fort of Didius", and the city can trace its history back to Roman times. 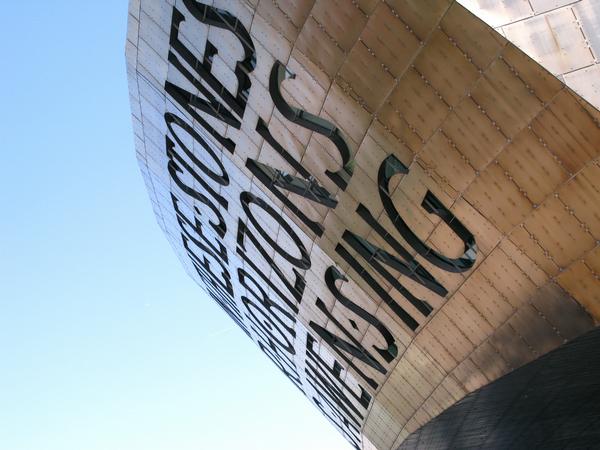 Like many of our cities, Cardiff's major development and wealth began with the industrial revolution, and owes much of its prosperity to the local Bute family.

John, Lord Mountstuart, came to the area to marry local heiress Charlotte Windsor, and in the process acquired huge estates and mineral rights. The family came to Cardiff in 1766, and in the 1790's built the Cardiff canal to join Cardiff with Merthyr Tydfil. 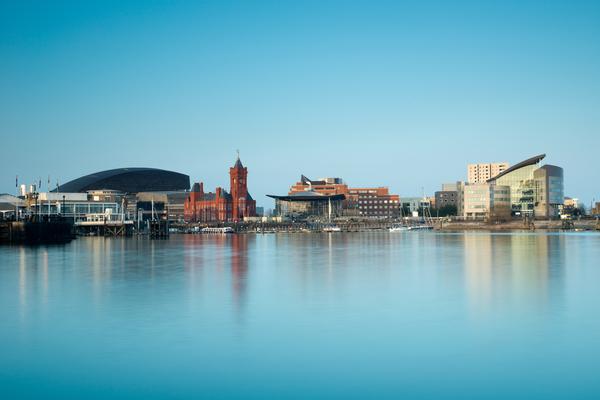 The Butes owned vast areas of the Welsh valleys, which were becoming industrialised and became extremely wealthy, thanks to the rich deposits of coal; their grandson, the second Marquis built much of present day Cardiff.

In 1839 he took a huge gamble in creating the first Cardiff Dock, others followed in quick succession, and all the coal and iron from the Welsh valleys was exported from these docks. This made Cardiff one of the busiest ports in the world, with a soaring population and prosperity. 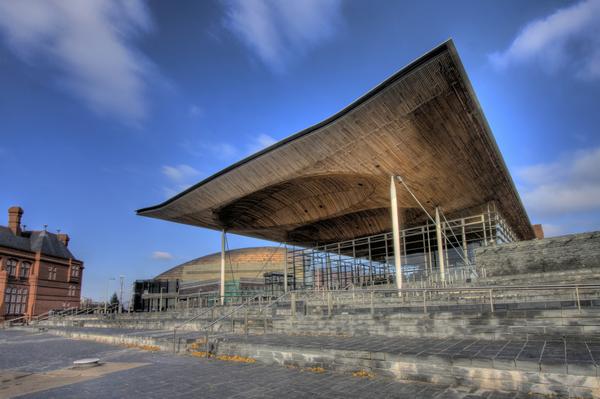 The third Marquis of Bute (1847-1900), was one of the wealthiest men at the time; he was a scholarly and religious man, and had a keen interest in architecture, it was he who had both Cardiff Castle and Castle Coch restored.

By the end of the Second World War, the Bute family had donated and sold all their assets in Cardiff. The present Marquis, the seventh, now lives in Mount Stuart House on the Isle of Bute off the Scottish mainland; he is the Formula 1 racing driver Johnny Dumfries.

With the coming of new industry and businesses which replaced the dwindling dock trade, its growth as an important University city and becoming the home of the Welsh Assembly making Cardiff its home, Cardiff is looking to the future on an optimistic note. 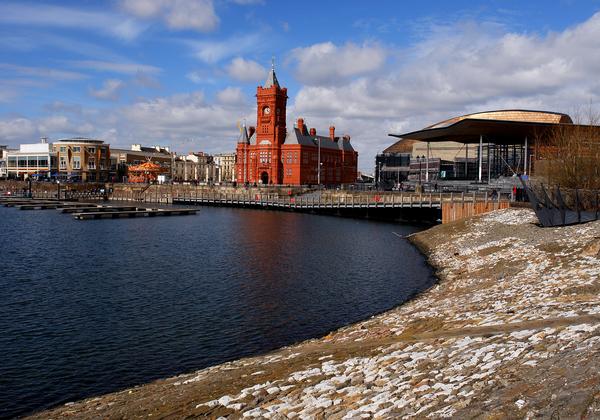 Cardiff Bay Barrage has been built across the rivers Taff and Ely, to create a 500-acre freshwater lake to provide moorings for 200 yachts, the barrage spans the entire mouth of the bay and provides a picturesque waterfront.

Mermaid Quay is a complex of shops, restaurants and bars, designed to bring a festival atmosphere to Cardiff Bay's Millennium Waterfront.

The Welsh Assembly is housed in a specially commissioned 21st century building. An elegant creation of steel, slate and glass, situated at the heart of Capital Waterside. 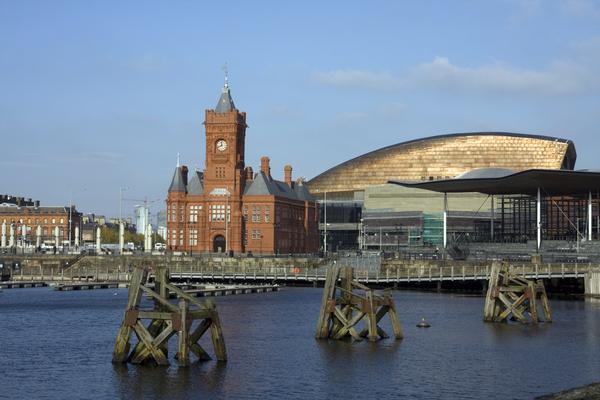 Wales Millennium Centre, another new 21st century landmark, located in the Bay, is a purpose built arts centre, with a 1,900-seat auditorium and restaurants, which is the home of the Welsh National Opera.

Techniquest, situated in the Bay area, is a Science Discovery Centre, with 160 interactive exhibits, Planetarium, Science Theatre and Discovery Room, offering fun for all ages. 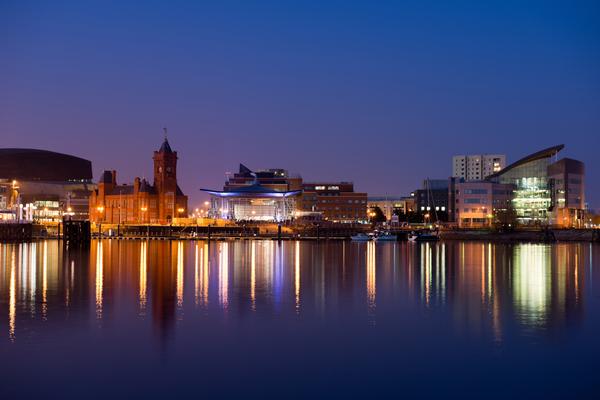 The Millennium Stadium is situated in the centre of the city, on the site of Cardiff Arms Park. Opened in 1999, the stadium is one of the most exciting engineering projects of its kind to take place in the UK. With the capacity to seat over 72,000 and the only stadium in Britain to boast a retractable roof, Cardiff is home to Europe's largest undercover venue.

A Church has stood on the site of Llandaff Cathedral since St. Teilo is thought to have founded a simple wooden building in the 6th century. Built in stone in Norman times, the Church has been ruined and restored several times.

Today visitors can see the mix of different ages and styles, especially in the mismatched towers.The interior has several interesting stained glass windows and panels, the work of the Pre-Raphaelite artists Edward Burne-Jones, Gabriel Rossetti and the firm of William Morris whose work was commissioned in the Victorian restoration.

The nave is dominated by Epstein's modern statue "Christ in Majesty". 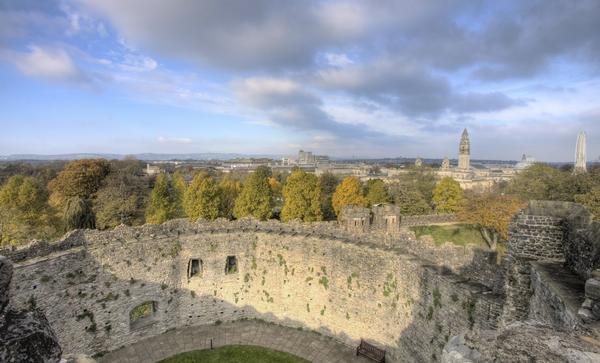 Cardiff Castle is built on the foundations of a Roman fort, later additions were made in Norman times, and the moat and keep still survive today.

Visitors to the castle today find a Neo Gothic Victorian mansion, created by the third Marquis of Bute. 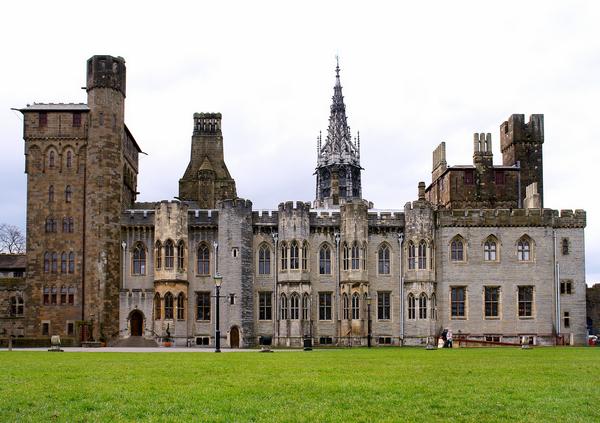 The castle is opulent in the extreme, containing a mix of many different styles and periods. Each room with its own theme is lavishly decorated, with murals, carvings gilding and stained glass.

Castle Coch just north of Cardiff is another of the Marquis of Bute's creations.

It is a fairy tale castle with round towers and needle turrets, built in medieval style. 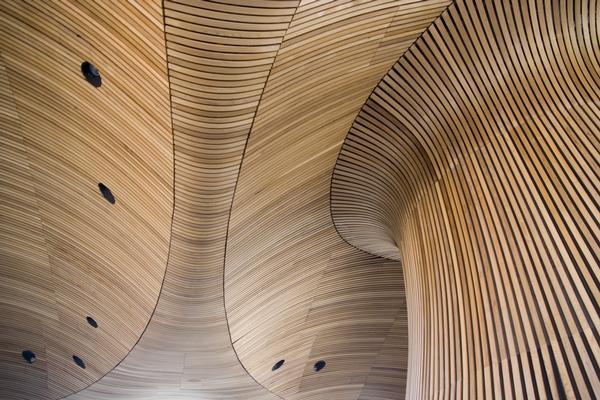 The interior was treated in a similar vein to Cardiff Castle and is again an eclectic mixture of tastes. Intended as a holiday home for the Bute family, Castle Coch was apparently used to quarantine the Bute children when they had infectious diseases.

Cathays Park in the city centre is where you will find many of the architectural gems of Cardiff.

The Civic Centre is an impressive Edwardian building of Portland stone, who's centre piece is City Hall crowned with a domed roof topped by a dragon, the Welsh National symbol. The interior is a gracious marble hall lined with statues of Welsh heroes. 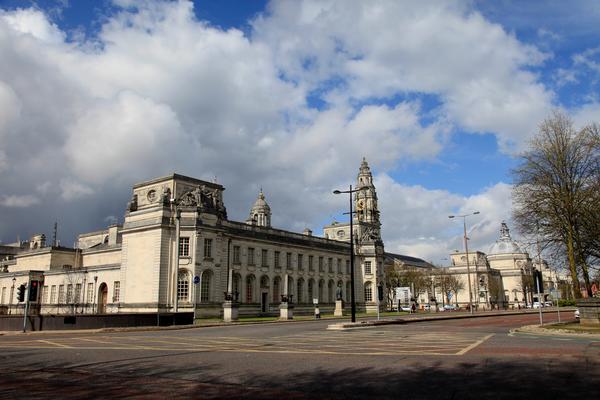 City hall is flanked by the Law Courts of 1906 and the National Museum and Gallery which houses collections of everything from archaeology to zoology.

There are exhibitions on the Evolution of Wales, also the Natural History of Wales. The Gallery is home to a priceless collection of impressionist and post-impressionist paintings, the largest outside France. 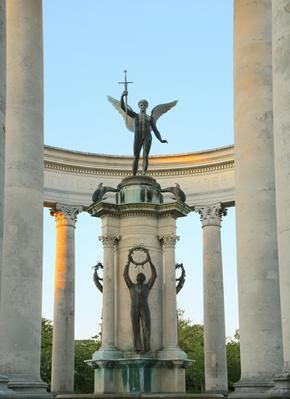 The Centre for Visual Arts is housed in the magnificent old Library, this is the new home for artistic activities and displays outstanding art, craft, design and architecture from Wales and around the world. It is truely a hands-on gallery where the whole family can get involved in the fascinating world of art in a fun and friendly environment.

The Museum of Welsh Life, situated four miles from the city centre should not be missed. This award-winning museum is a delight, more than 30 original Welsh buildings have been reconstructed in perfect detail, in the setting of a Celtic village.

Cardiff offers a wide choice of entertainment, everything from the Welsh National Opera, the Welsh Proms and Male Voice Choirs to the latest chart toppers, all taking place in the cities theatres and concert halls - St. David's Hall, the Sherman Theatre, New Theatre and Cardiff's Chapter Arts Centre.

Cardiff can offer visitors a choice of many ethnic cuisines as well as traditional Welsh food at its best. You'll find authentic Welsh ingredients wherever you see the Flavours of Wales "hungry dragon" sign.

There are frequent InterCity services to and from London, Manchester, the Midlands, West Country and South Coast.

Cardiff International Airport is at Rhoose, a 20-minute drive from the city centre.

Days Out in Cardiff

Places to Visit near Cardiff