You are here:  Towns -> Places to Visit in West Yorkshire -> Bingley

Things to do in Bingley, West Yorkshire 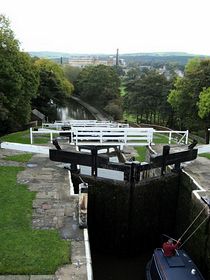 Bingley is a West Yorkshire town located five miles northwest of Bradford. It is located in Airedale on the south of Ilkley Moor.

Bingley means "Bing's Clearing" and is Saxon in origin. The first settlement served the ford across the River Aire at the narrowest point of the Aire Valley. Ireland Bridge was built in 1686 to replace the ford.

"Bingheleia" was listed in the Domesday Book in 1086 as a manor valued at four pounds. The Bingley manor would have extended up and down the Aire Valley in mediaeval times.

he town received its market charter in 1212. By 1379 Bingley was the largest town in the area with 130 households. It was twice the size of Halifax, Leeds and Bradford at that time.

The Black Death devastated many towns in the 13th century. Bingley seemingly fared well but neighbouring Boulton had no survivors worth taxing, according to poll tax records.

A map of Bingley in 1592 shows it as a single street with the church at the west end, opposite a large manor house. Houses ran down on either side and the market would have taken place along the street.

The Old White Horse Inn is one of the oldest surviving buildings, a Grade II listed coaching inn, built in the mid 17th century. There has been an inn on the site since 1379. Note the two stone lanterns on the gable which signify the building was once owned by the Order of the Knights of St John.

During the Industrial Revolution Bingley had several mills and a tannery. The Bingley Building Society was also formed at that time.

The market town of Bingley has a population of 16,000 in the town and a further 16,600 in the Bingley rural district, according to 2001 figures. Boundary changes have since increased these estimates.

The town has plenty of local shops, a street market, banks and the Little Theatre.

Bingley has excellent transport links with a railway station in the town centre and the Leeds Bradford Airport nearby.

Most textile mills have closed except for the Damart factory. The Bradford and Bingley Building Society headquarters was a large local employer until the bank collapsed in 2008.

Things to Do Around Bingley

The Leeds and Liverpool Canal runs through the valley and is well known for the Bingley Five Rise Locks. Visitors can walk along the tow path and watch the barges navigating the locks.

Walking and cycling in this unspoilt area are popular attractions. Golfers can play a round at the scenic Bingley St Ives Golf Club.

At the end of August, Bingley Music Live is held in Myrtle Park. The music festival provides a wide genre of high quality music and attracts a diverse audience.

Leeds has several interesting attractions including the Thackray Medical Museum. The National Media Museum at Bradford is one of the most visited museums outside London with exhibits on photography and video games.

Haworth was the home of the Bronte sisters and makes an interesting day out, six miles away. 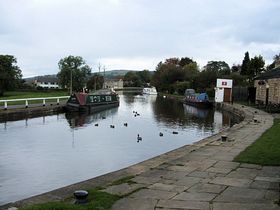 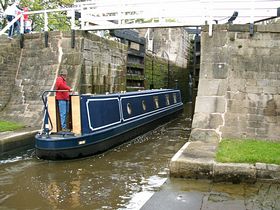 Days Out in Bingley

Places to Visit near Bingley