You are here:  Towns -> Places to Visit in Devon -> Bideford

Things to do in Bideford, Devon 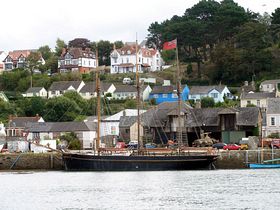 Bideford is a small port town in North Devon, on the banks of the River Torridge.

The main town is linked to East-the-Water by a long bridge, built in the 13th century with 24 arches each varying in size. Each span was paid for by a local wool merchant, and depending on his wealth it was either a small or a large arch!

Each New Year's Eve there is a race across the bridge and traditionally runners must complete the run before the final chime of St Mary's Church bells. The church tower dates back to 1259.

At one time Bideford's sheltered port was one of the busiest in England. It is rumoured that Sir Walter Raleigh once landed a shipload of tobacco there and consequently his name is on several street names and attractions.

In 1682 three women were put on trial for witchcraft. They were found guilty and hanged but the Bideford Witch Trial was the last time anyone was hanged in the UK for witchcraft.

Writer Charles Kingsley lived in Bideford in the 19th century and he wrote his novel called Westward Ho! Later a small resort three miles away on the coast was developed and named after the book. His statue can be seen in pride of place on the quayside car park.

Bideford is still centred on its long riverside quay which is lined with trees and acts as a flood defence. Fishing vessels, cargo boats loading clay and pleasure craft can be seen side by side along with the MS Oldenburg which sails across to Lundy Island during the summer months.

From the quay the narrow shop-lined streets run steeply uphill into the centre of the town. There are plenty of local shops, banks and small supermarkets serving the population of around 14,600 people.

The town has several local pubs including the Blacksmiths and The Swan, which is known for its award-winning food.

Bideford has two sports fields to accommodate the Bideford Rugby Football Club and the Bideford Amateur Football Club. Confusingly both are called King George's Fields so the football pitch is known locally as the Sports Ground.

Things to do in Bideford

Chudleigh Fort is a key historical attraction in the area and was built during the English Civil War.

The South West Coast Path runs through Bideford on its route around the coast of South west England. It provides excellent walks with great views from the cliff path.

The Bideford Art Gallery and Museum can be found on Kingsley Road and has both touring and permanent exhibitions.

The Dartington Crystal Workshops are nearby at Torrington. Visitors can see the master craftsmen blowing the molten glass and can pick up bargains in the local factory shop. Also nearby are the beautiful RHS Garden Rosemoor which are a splendid collection of themed gardens in an extensive wooded 65-acre estate.

For families the Big Sheep is a hands-on farm with plenty of lambs to feed and animals to pet all year round. The Milky Way is a children's adventure theme park with slides, an assault course and plenty of other activities.

Bideford is close to many local sandy beaches and beauty spots such as the cobbled streets of Clovelly, the scenic village of Instow and the ship-building port of Appledore.

Days Out in Bideford

Places to Visit near Bideford